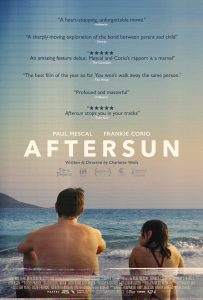 It’s one thing for a movie to be subtle and nuanced, but it’s something else entirely to be enigmatic and cryptic. And, regrettably, the debut feature from writer-director Charlotte Wells delivers more of the latter than the former. This melancholic character study tells the story of a woman (Celia Rowlson-Hall) who looks back 20 years to a vacation that her perky 11-year-old self (Frankie Corio) took with her young and loving but quietly troubled father (Paul Mescal). In doing so, it explores the subjects of memory, parent-child relationships, mental and emotional well-being, and the various senses of loss we all experience over time, topics that the protagonist’s youthful counterpart may not have fully understood at the time but that her adult self now does. I wish I could say the same for myself, though; I often felt that I was being tasked to construct a narrative for the picture myself, based, essentially, on merely what was being shown to me, material that frequently comes across as underdeveloped and open to an array of interpretation in terms of both story line and character development. To put it simply, I didn’t feel I was given enough substance to work with to accomplish that task, and it often left me feeling wanting, abandoned by the filmmaker, and, ultimately, uninterested. And, to complicate matters further, the film’s poor sound quality regularly obscures the characters’ dialogue behind their thick Scottish accents, and its often-dark, overly muddled cinematography made some images difficult to decipher at times. What’s more, this offering’s camera work – aimed at simulating glorified home movies, a fitting approach for telling this story – is packed with innocuous material. Indeed, who really cares about sitting through endless footage of the characters engaging in mundane activities like playing video games, eating ice cream and attempting to sing karaoke? The “looking back in fondness” factor in these supposedly touching segments is a little too inane to engender truly heart-tugging feelings, constituting cinematic padding more than anything integral or meaningful to the overall story. Considering all of the advance glowing reactions I had read about this release, I was really looking forward to it going in. Unfortunately, though, I came away from it almost as sad and disappointed as the protagonist herself.