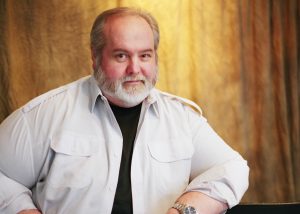 A lifelong movie fan and longtime student of metaphysics, Brent Marchant is the award-winning author of Get the Picture?!: Conscious Creation Goes to the Movies  (ISBN 978-1505570166, 2014), Consciously Created Cinema: The Movie Lover’s Guide to the Law of Attraction (ISBN 978-1495976643, 2014) and Third Real: Conscious Creation Goes Back to the Movies (ISBN 978-1976207501, 2017), all of which provide reader-friendly looks at how the practice of “conscious creation” (also known as “the law of attraction”) is illustrated through film. Get the Picture?!, which was originally released in 2007 and rereleased in an updated second edition in 2014, was named 2016 winner of the National Indie Excellence Award for Best New Age Nonfiction. And Third Real, released in 2017, was named a 2018 finalist in the National Indie Excellence Award competition for Best New Age Nonfiction.

Besides his writing, you can hear Brent on the radio. His monthly movie news and review segment Movies with Meaning airs on The Good Media Network’s Frankiesense & More show. His twice-monthly reviews of current films are featured in his Cinema Scribe segment on Bring Me 2 Life radio. He is also a former contributor to New Consciousness Review radio’s Reviewers Roundtable. Brent is a frequent guest on various Internet and broadcast radio shows, as well as a presenter at conscious creation conferences.

You can follow Brent and his books on various social media sites, including Facebook, Twitter, LinkedIn, Pinterest, MeWe and Ello, as well as on the book-focused sites GoodReads, LibraryThing and Amazon Author Central. You can find links on this web site’s Social Media Page.

In addition to his writings about metaphysics and movies, Brent spent 13 years as a writer and editor in the horticultural publishing field, including 9 years as founding editor of Interior Landscape magazine. He also contributed essays to two volumes of The International Directory of Historic Places. He holds a B.A. in magazine journalism and history from Syracuse University, where he served as Features Editor of the on-campus newspaper, The Daily Orange.

In addition to his writing, Brent is a Level III practitioner of the Reconnective Healing® technique and a seasoned Tarot card reader. He is also an avid practitioner of guided visualization and past life regression techniques.

When he’s not watching movies, writing books or chatting on the radio, Brent enjoys traveling, cooking, visiting museums, spending quality time with friends and actively engaging in the search for the perfect margarita. He resides in Chicago with his longtime partner, Trevor.