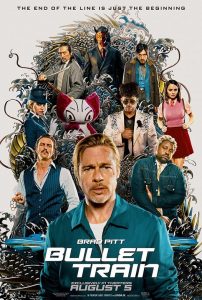 I’ll be blunt about this one – I hated it. If you’ve seen the modestly amusing trailer for director David Leitch’s latest, you’ve seen all you need to see. This overlong, ridiculously convoluted train wreck (obvious pun intended) lost my interest about 20 minutes in, and I never got it back during its 2+ hour runtime. While seemingly attempting to be a playful action comedy in the spirit of movies like “Red” (2010), “Kingsman: The Secret Service” (2014) and the “Deadpool” franchise, “Bullet Train” instead comes across as gratuitous, nasty and mean-spirited, more like the “John Wick” offerings or the works of Quentin Tarantino, pictures that desperately stretch the meaning of “funny.” This cinematic mess tries way too hard to generate laughs but falls flat at virtually every juncture, failing to stick any of its landings. And that’s a huge disappointment given the stellar cast, including leading man Brad Pitt, whose comedic talents are wasted on a script that gives him precious little to work with. The result is a tedious, feeble, exhausting, tiresome attempt at a summertime thrill ride that tells a story not worthy of caring about, filled with repulsive characters, wholly improbable events and underwhelming special effects. In fact, the only thing positive I can say about this disaster is that, fortunately, I lived to tell about it.