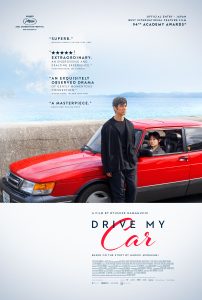 My goodness, I couldn’t wait for this one to end. Director Ryûsuke Hamaguchi’s boring, snail’s-paced, meandering cinematic tome – coming in at just a hair under three hours – is yet another example of the overhyped crop of pretentious releases that characterized the 2021 movie year. As a character study examining the life of a widowed stage actor/director who comes to grips with the truth about his sexually free-spirited wife after her sudden death, the film delves into themes of life imitating art (and vice versa) as he oversees a production of Anton Chekhov’s Uncle Vanya. The multilayered script parallels the plot of the famed Russian play, adding pervasive symbolism in the narrative reflective of the story in Chekhov’s work. Of course, appreciating that requires an intimate (and I do mean intimate) knowledge of the source material without which the average viewer is most likely to be completely lost. Ambitious as such an undertaking might be, the picture begs the question, what good is it if most audience members won’t be able grasp what’s going on? Add to that a wealth of seemingly unrelated subplots, extraneous material and surprisingly underdeveloped characters, and you’ve got a long-winded, smug, self-indulgent art piece that comes across as very self-satisfied with its form, structure and alleged cleverness. How this managed to pick up four Oscar nominations (including best picture) is beyond me. I was relieved when the end finally came, because, as it droned on and on and on, I began to wonder how much more I could take. Thank goodness for a clock that finally managed to tick all the way down.