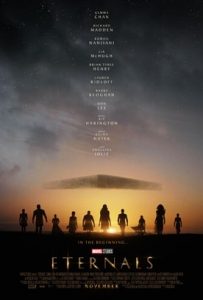 Putting a big budget superhero movie in the hands of a director best known for making intimate little dramas is quite a risk, and such is the case with this latest offering from the Marvel Universe. The result is a mixed big, one that has many strong points as well as a number of not-so-strong points. To its credit, the film’s special effects are quite eye-popping, as is the cinematography featuring images shot (or simulated) from around the world. The picture also features a narrative that refreshingly attempts to break the mold typical of most Marvel Universe releases, incorporating greater degrees of relationship development and genuinely funny comic relief than is often found in these movies. However, the complicated story line is not always fleshed out as coherently as it could be, a problem compounded by uneven character development, assumptions about viewer foreknowledge of the material and a chronic need for editing many sequences that sag in between the good parts. In all, “Eternals” feels very much like a typical Chloé Zhao movie but with a bigger budget – and one in which her weaknesses as a filmmaker come across more noticeably than in her typical fare. It’s apparent from this picture that Ms. Zhao is still developing as a director – and should be recognized as such instead of given the blank check of accolades often accorded her.