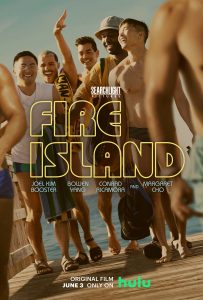 If you’re looking for a predictable, formulaic, episodic gay rom-com full of clichéd stereotypes, then this is the movie for you. The opening act of director Andrew Ahn’s summertime road trip tale about a troupe of shallow party boys (most of whose characters are seriously underdeveloped) to the infamous queer resort off the coast of Long Island is so cloying that the temptation to shut it off is almost impossible to ignore. With laughs few and far between and an overall approach that plays more like an introduction to the gay lifestyle for uninitiated heterosexual audiences than a bona fide piece of legitimately engaging LGBTQ+ cinema, viewer patience is seriously tried almost from the outset. That’s especially true for gay audience members who’ve themselves seen (and probably experienced firsthand) material like this countless times before. While there’s an anemic attempt to fuse some depth into the story during the second half with its nods to Jane Austen’s Pride and Prejudice, it’s not enough to salvage a project that’s obviously trying to tap into the Gay Pride Month demographic in hopes of milking it for all its worth. Given the wealth of better gay-themed movies out there (such as Bill Sherwood’s far superior “Parting Glances” (1986) with its numerous less forced Fire Island references), it’s easy to understand how this one bypassed theaters and went straight (no pun intended) to streaming.