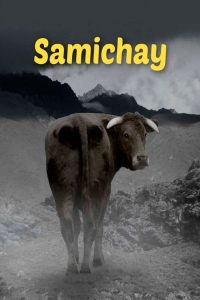 It’s one thing for a movie to strive for greatness; it’s something else to try too hard in achieving it. That’s the case with director Mauricio Franco Tosso’s debut feature about a destitute Andean subsistence farmer living with his daughter and mother-in-law. He struggles to make ends meet, his only potential source of income being his undernourished cow, Samichay (which, in Quechan, translates as “in search of happiness”), on whom he places high hopes for birthing a fine young calf, something that’s unlikely to happen given her health. But he soldiers on, despite these conditions and a way of life that’s slipping away. The film thus examines the question of tradition vs. progress, as well as a man trying to hold on in the face of change. Unfortunately, the premise here is rather thin, and the narrative feels padded to cover that shortcoming, relying on qualities like its beautiful black-and-white cinematography to cover the film’s central failing. But, despite such attempts at polishing the tarnish and considering this work’s serious need of editing, this is a story that could probably be whittled down to a short quite handily. Instead, the use of artsy techniques to mask what is a simple tale dressed up in a feature-length package just doesn’t work. The result is a fundamentally boring offering that aspires to nobility with a phony, inflated, euphemistic sense of loftiness that, sadly, rings patently hollow.