‘The King of Staten Island’ 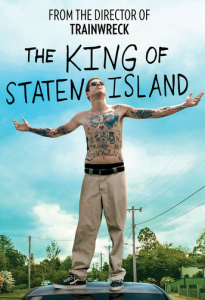 “The King of Staten Island”

No matter how hard the filmmakers and cast tried to sell this story of an angst-ridden millennial perpetually mourning the loss of his firefighter father, I didn’t buy it – not for a minute, despite a semi-autobiographical story and script by protagonist Pete Davidson. Director Judd Apatow’s overlong, unfocused comedy (a term I use loosely) takes far too long to find its feet, and it does so with an endless string of snappy, smarmy one-liners that don’t jibe with the supposedly fragile mental state of the allegedly troubled lead character. And, when the film finally does start to move forward, the narrative’s warm, fuzzy conclusion lacks plausibility in light of its cynical setup, a problem made worse by steaming heaps of melodrama and inordinately saintly characters primed for canonization. While the picture genuinely features a fine performance by Marisa Tomei, its attempt at making Davidson’s character into more than the one-dimensional player he is sorely falls short, a fate not unlike that shared by many other former SNL regulars who have attempted to transition from the small to the big screen. In all, the premise here is shaky to begin with, and it’s made all the worse by too many tangents, insufficient clarity and poor execution, suspicions that first surfaced when I screened the trailer and that became all too apparent while sitting through this endless slog.