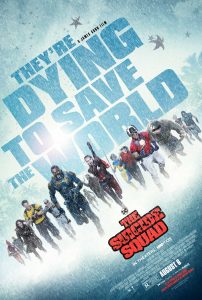 I’m truly at a loss to understand all the praise that’s being heaped on this steaming pile of crap. This latest installment in the “Suicide” franchise is truly annoying, exhausting and exasperating (not to mention shamelessly derivative) in virtually every regard. The overlong ragtag story line defies credibility and coherence, even for an action-adventure/sci-fi/fantasy vehicle, where suspending belief generally gets a pass and is assumed to come with the territory. The uneven pacing and often-amateurish editing bog down the progression of the narrative, and the smorgasbord of gags and action sequences grows wholly tiresome quite quickly, despite a few that land successfully. And, with the exception of Margot Robbie’s third turn in the role of the outrageous and inimitable Harley Quinn, there’s not much to praise among the performances here, either, with heavy hitters like Idris Elba, Viola Davis, John Cena and Sylvester Stallone clearly taking part to cash in on what are assuredly hefty paychecks. Director James Gunn’s latest feels like a production thrown together by a room full of stoned collaborators who have combined all of their ideas no matter how well they mesh and, sadly, with little attention paid to creating something cogent and cohesive. While many critics and viewers may have generously given this one a thumbs up simply for having been an improvement over the film’s predecessor, that’s not really saying much, especially when it comes to whatever discernable merits this second installment might have (not that such qualities are easy to spot to begin with). What’s most troubling, though, is how this picture regrettably reflects the state of the American movie industry these days (thank God for foreign films and documentaries).