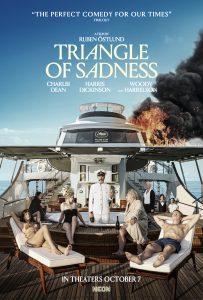 Is turnabout fair play? That’s a good question, one that’s put to the test in this outrageously hilarious new sociopolitical satire from writer-director Ruben Östlund. Drawing upon themes explored in previous works like “Force Majeure” (2014) and “The Square” (2017), the filmmaker explores what happens when the uber-privileged passengers aboard a luxury yacht find the tables turned on them, placing them in circumstances where those they once callously and willfully disrespected suddenly find themselves having an undeniable upper hand. But will those who were once oppressed draw from their unfortunate experiences and treat the nouveau downtrodden with dignity and compassion, or will they morph into newly emerging versions of those they previously spitefully detested? In addition to matters of money and power, the characters in this sidesplitting farce also wrestle with issues related to gender, physical beauty and social influence and how they wield their influence in these areas in their relationships with others, including both peers and those of different class status. The symbolism employed to convey these notions can be a little heavy-handed at times, but it’s always decidedly clever in its implementation, making the picture’s message readily known but without being too on the nose. Also, some of the bits – as funny as they are – occasionally go on a little too long, a quality easily apparent given the film’s unusually protracted runtime of 2:27:00, uncharacteristically long for a comedy. Nevertheless, so much of what takes place here works so well that it’s truly hard to find fault with the Palme d’Or winner from this year’s Cannes Film Festival, the event’s highest honor. This is the kind of picture that one might not suspect to be quite so uproarious upon entering the theater, but the film definitely delivers the goods, much in the same way that the Oscar-winning offering “Parasite” (2019) did. And, if you found that funny, you’re sure to find more of the same here.