‘Still Mine’ unmasks the hazards of creative limitation

The power of creation is one of our essential birthrights, one that enables us to manifest any of a number of infinite possibilities. But, when our efforts become unduly stifled by limitations, such hindrances can make for difficult times. The perils of these restrictions can lead to frustration and heartache, challenges that are clearly depicted in the new, fact-based drama, “Still Mine.”

New Brunswick farm couple Craig and Irene Morrison (James Cromwell, Geneviève Bujold) have lived a long, happy, love-filled life together. They’ve spent many a productive year in Maritime Canada, herding cows, growing strawberries and raising seven children, including their daughter Ruth (Julie Stewart) and son John (Rick Roberts). But, for all their sweat equity, they don’t have much to show for their efforts, at least financially speaking. Under typical conditions, they’ve managed to get by, but, now that the infirmities of age have set in, the shortage of funds has become something of a problem (universal health care notwithstanding). 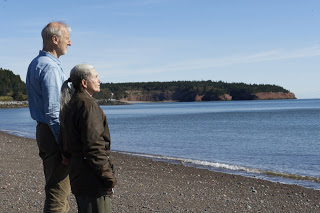 The biggest challenge the couple faces is Irene’s failing memory and declining motor skills. Try as she might to keep up her regular routine, she’s unfortunately succumbing to the ravages of time. Those problems are exacerbated by the ramshackle state of their two-story farmhouse, which is becoming difficult to maneuver about and hard to keep heated in winter. A new living space – one capable of accommodating Irene’s emerging special needs – is clearly in order. However, renovating the structure wouldn’t be practical, and, given its decrepit condition, the couple is unlikely to get much money for it if they attempted to sell it and buy something new. What are they to do?

While mulling over their options, Craig comes up with a novel idea. The two things the Morrisons have in ample supply are land and timber, so Craig proposes building something new – with his own hands. He envisions a smaller, one-story structure, one that would be easier to manage, less costly to keep warm and more accessible for Irene. And, since he would be doing the work himself, it would be eminently affordable, too. Irene likes the idea, so Craig decides to move ahead with his plan. 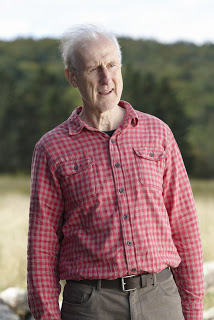 Everything seems to be going well until the outside world begins to make its presence felt. The trouble starts when Craig applies for a construction permit from the local housing authority, where one of its officials, Rick Daigle (Jonathan Potts), begins quoting rules and regulations on everything from building plans to material quality certifications. And, despite Craig’s subsequent good faith efforts to comply, he’s thwarted at every turn. Faced with a stop work order, he’s forced into hiring an attorney, Gary Fulton (Campbell Scott), to plead his case and demonstrate compliance. But, even though Craig moves forward with determination, he’s in a race against time; as the construction delays pile up, Irene’s condition continues to deteriorate, necessitating drastic adjustments to their current living space and life-style.

Over time, the housing authority’s interference with Craig’s efforts intensifies, resulting in ever-increasing frustration. In fact, the government’s scrutiny grows so severe that it seems to move beyond merely enforcing building code considerations, tacitly becoming a sort of personal vendetta. With the breaking point reached, Craig resorts to extreme measures to further his plans. The question is, will he go too far? What implications are involved in his actions? Will the new house ever get finished? And what of Irene – will her needs be adequately met? It’s a lot for the octogenarian to handle, but, with determination and principle on his side, Craig forges ahead, no matter what consequences may await him. 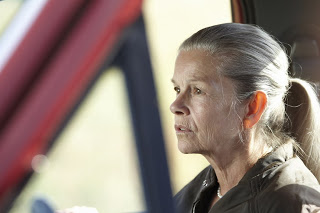 Faced with the challenges of memory impairment and reduced motor skills, farm wife Irene Morrison (Geneviève Bujold) struggles to get by in the compelling new drama, “Still Mine.” Photo by Ken Woroner, courtesy of Samuel Goldwyn Films.

One of the inherent qualities characterizing conscious creation is, of course, the act of creation. Indeed, as innately creative beings, engaging in such acts is what we do. In fact, one of the primary purposes of our existence is to explore the creative possibilities of physical existence, a process that, ideally, works best when we’re able to pursue it unfettered, without undue limitation or interference.

So, given Craig’s circumstances, it should come as no surprise why he experiences such mounting frustration. As someone who’s obviously quite capable of accomplishing what he’s set out to do, it has to be incomprehensibly vexing to encounter the incessant interruptions foisted upon him. His exasperation is no doubt compounded by the fact that the true agenda behind the housing authority’s resistance is not always made clear. Are the petty bureaucrats he deals with purely interested in safety concerns, or is there something else going on? While nothing definitive is ever stated, there are definite suggestions that there may well be more afoot than the authority’s stated concerns.

Of course, when we create our reality, we create the totality of it, too. So, as much as Craig is attempting to manifest a new house, he has also materialized the circumstances he’s encountering, including the frustrations he experiences with government officials. But why? 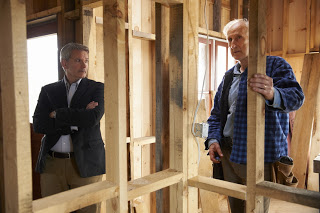 As Craig’s story plays out, it begins to attract public attention, including through the reporting of a local journalist, Marty Klinkenberg (Verlyn Plowman). The reporter’s articles help to make the local community aware of what’s going on, not only of the particulars of Craig’s situation, but also, by way of implication, of several larger issues.

Most notably, Craig’s actions (and Marty’s reporting of them) help to shed light on the significant effects that interference and limitation can have on the exercise of creative expression, hindrances that can curtail whatever one seeks to create, whether it’s an oil painting, a work of poetry or even a new house. In that respect, then, Craig serves as a sort of metaphysical standard bearer to champion this cause and remind the world at large about it, even if others have lost sight of it. This is particularly important for encouraging the efforts of those who are truly gifted at transforming their visions into materialized expressions of physical reality. Those who are skilled at conceiving such creations and then bringing them into being (especially those who operate from a position of integrity and do so with supreme self-confidence) should be cheered on for their efforts. Moreover, those who would deliberately set up roadblocks to impede their initiatives should be called out for their actions, no matter what their motivations might be. On all of these fronts, Craig’s efforts serve to shine a much-needed light on them.

Craig’s story also illustrates how collaborative actions can work wonders in achieving desired results. The power of co-creation is truly an awesome force and can result in miraculous outcomes when allowed to play out. With the energy and support of his family, friends and the public, Craig just might accomplish what he set out to do. Again, he and his co-creators serve as an example of this principle, providing inspiration for those seeking to realize desired outcomes through collective effort.

This little-known independent release is easily one of the year’s best pictures thus far (and I sincerely hope it doesn’t get forgotten during awards season). It features excellent lead performances by Cromwell and Bujold (the best that they’ve each turned in for quite some time), as well as Potts as the petty bureaucrat. The picture is generally well written, evoking genuine heartfelt emotion without becoming schmaltzy or overly sentimental, despite a narrative that could have easily led to that. It’s also gorgeously filmed, showing off Atlantic Canada in a beautiful light. Writer-director Michael McGowan has truly come up with a winner in this picture.

In an age when our actions seem to be increasingly restricted by the whims and dictates of those in positions of “authority,” it helps to be reminded of who actually has domain over our power, particularly where the power to create is concerned. To that end, “Still Mine” serves a valuable purpose, prompting us to recall – and, when needed, act upon – our inherently creative nature. And, if we hope to avoid the perils that arise when we allow limitation to be imposed upon us, we had better pay attention.