‘Sully’ wrestles with the meaning of ‘hero’

What makes a hero? Is it someone who performs extraordinarily beneficial acts? Or can it be someone who believes he or she is just doing his or her job? But what if it could be both? Those are among the issues posed in the new fact-based saga, “Sully.”

In January 2009, the world was in awe of an event that came to be known as “the Miracle on the Hudson,” a successful water landing of a US Airways jet liner on New York’s Hudson River after both of its engines were rendered inoperative by a bird strike. The unprecedented damage to the aircraft prevented a landing at any of the New York area airports, forcing Capt. Chesley “Sully” Sullenberger (Tom Hanks) and his first officer, Jeff Skiles (Aaron Eckhart), to take drastic measures. Given the history of water landings, the prospects weren’t promising. But, thanks to the crew’s efforts, the plane landed successfully – and everyone survived. What’s more, everyone was successfully evacuated and safely ashore in a scant 24 minutes.

In the wake of the incident, Sully was publicly hailed as a hero. But, behind the scenes, the pilot’s actions were questioned by investigators (Jamey Sheridan, Anna Gunn, Mike O’Malley) from the National Transportation Safety Board, who claimed that computer simulations showed the plane could have been successfully flown back to its departure point, New York’s LaGuardia Airport. Sully contended that simulations don’t tell the entire story, but the investigators maintained otherwise, prompting the captain to second-guess what he did.

Meanwhile, the mild-mannered pilot was far from accustomed to all of the attention he was receiving from the media, including an interview with Katie Couric and an appearance on The Late Show with David Letterman. He was even approached by multitudes of everyday citizens, who unreservedly expressed their congratulations and gratitude, regardless of whether they had any connections to the flight or any of its passengers. Sully believed he was just doing his job, but now he had become a national folk hero – one who had to wrestle with that label in the wake of the scrutiny he was under from government officials, as well as the generous public praise he received from virtually everyone else. 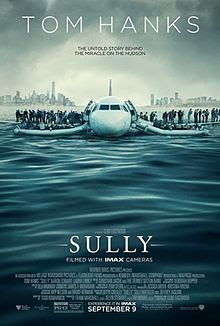 It seems everyone loves a hero, and those fans are eager to show their affection and appreciation. But what does it mean for the person who is the object of such adulation? Many of us would probably think such praise would be warmly welcomed, but is that truly the case? Consider the case of someone as unassuming as Sully, who was more concerned with doing his job and ensuring the safety of his passengers than becoming preoccupied with whatever recognition would come from it. That’s a real hero, and this film celebrates that fact, not only in the wake of what happened, but also in light of what he was subjected to in the incident’s aftermath.

In doing that job, Sully had to make some difficult decisions about how to proceed. What would bring the optimal result for all concerned? That involved some critical choices, considering the difficulty of the circumstances involved. But, thankfully, that’s where Sully’s acute conscious creation skills – the means by which we manifest the reality we experience through the power of our thoughts, beliefs and intents – came into play.

The bird strike caused unprecedented damage to the Airbus A320 jet liner, an aircraft well known for its reliability. That placed Sully in a situation requiring an unprecedented solution. But, from a conscious creation standpoint, how does one realize such a result?

Several key components factor into devising such an outcome. First, unparalleled circumstances call for thinking outside the box, pushing past preconceived limitations and envisioning a result never before tried. This was particularly crucial in this situation given the time frame involved: With the plane at relatively low altitude and no engine power available, Sully needed to act quickly to avoid a catastrophe. That meant calling upon all of his creative resources to come up with beliefs that would support a favorable resolution.

To accomplish this, Sully needed to draw upon both the power of his intellect and intuition, the chief sources of input that lead to the formation of our manifesting beliefs. Most of us don’t have a problem tapping into our intellect, since it tends to be the primary standpoint from which we view the world (and subsequently create it). In Sully’s case, this involved using his vast knowledge of aeronautics and his extensive aviation experience (something depicted through flashbacks to his prior flying adventures). Such knowledge factored heavily in the intellectual input driving his beliefs.

But Sully needed more than just “facts” and experience to see him through this scenario. Since he had to get creative in his approach to resolving the situation, he also had to employ his intuition, his gut feelings, about how to proceed. For many of us, this is often a tricky proposition, since we tend not to trust what our intuition has to say, its impressions frequently coming across as illogical, irrational and, hence, untrustworthy. Nevertheless, considering what he was up against, Sully had to rely on it in formulating a workable plan, no matter how outlandish it might seem on the surface.

In settling on the decision to try something as risky as a water landing, Sully needed to draw upon another key conscious creation concept – moving past his fears in attempting the untried act of touching down on the surface of the Hudson. Such a bold, courageous move meant that he truly had to live like a hero – and to believe that he could. There was no room for doubt or fear to undercut his resolve if he were to achieve the outcome he sought.

Such self-certainty also required that Sully have faith in his abilities to accurately assess the circumstances at hand and to properly execute the proposed task. That, again, required an unshakable confidence in himself and his abilities, free of the fear and doubt that might derail his efforts.

Considering the results, it’s apparent that, from a conscious creation perspective, Sully indeed had what it took to see his plans successfully realized. Ironically, it wasn’t until after the fact that he started second-guessing himself, when he began allowing the contentions of others to influence his thinking. This secondary challenge in many ways proved to be more of a threat to Sully (and the beliefs that drove his previous actions) than the circumstances that prompted him to behave as he did in the first place. This new situation thus called for Sully to galvanize himself in his beliefs, necessitating him to tap the same conscious creation resources that got him successfully through his first ordeal. Thankfully, though, he had the experience of his first challenge to draw upon in coming up with the appropriate thoughts, beliefs and intents necessary to surmount this latest test.

In addition, in getting through these challenges, Sully was fortunate to have the backing of his fellow co-creators to help see him through. Even though most everyone was heaping praise on Sully for a successful outcome, he was quick to point out that he could not have attained that result were it not for the support and assistance provided him by so many others, including the flight crew, the passengers, the first responders and the air traffic control personnel. Sully insisted that their input in the manifestation of this outcome was essential, and he never shied away from sharing the credit with them. But, then, that’s all part of what goes into the materialization of a successful co-creation.

For their part, the investigators played a role in this scenario as well. By challenging Sully, they helped him to reaffirm for himself what he knew in his heart to be true – that he pursued the proper course of action based on what his intellect and intuition told him to believe and subsequently do (anyone who doubts that need only look to the results he attained, which clearly speak for themselves). And, because of this, Sully was thus able to validate his personal sense of integrity, a crucial element in how he (or anyone else, for that matter) conducts himself when engaged in acts of conscious creation. By being true to ourselves, we’re able to see satisfying outcomes come to life.

The Miracle on the Hudson was a truly remarkable achievement, one that could have easily become a major catastrophe if it had been driven by a different set of underlying beliefs (particularly those undermined by doubt and fear). However, with those obstacles excluded from the mix and a sense of heroism firmly entrenched, a miracle occurred. But, then, as ardent conscious creators are well aware, miracles are, in actuality, nothing more than nature unimpeded.

“Sully” provides a captivating look at the back story of an astounding, heroic event that hasn’t received much, if any, attention until now. Fine performances and excellent special effects (especially the re-created water landing sequences) make for a surprisingly good film, one that I must admit proved better than I expected. Even though some aspects of the story are said to be somewhat overblown (such as the contentiousness of the NTSB investigation), director Clint Eastwood has nevertheless served up an excellent film here, one that provides an encouraging start to this year’s movie awards season.

The hero’s journey can be a difficult one, not only during the events that prompt the emergence of such a label, but also in its aftermath. Virtually anyone who has successfully weathered a harrowing experience can attest to this, too, particularly when the realization of what could have happened sets in, leaving survivors awestruck, perhaps even overwhelmed, by what actually occurred in the wake of those unnerving circumstances. Nevertheless, such outcomes ultimately remind us of the awesome power of what’s made possible by our beliefs and the conscious creation process, results that we should always appreciate and never take for granted, for doing otherwise might well yield a very different result the next time around.