Who we fall in love with is no one’s business but our own. However, it wasn’t always that way. As recently as the 1960s, interracial marriage was illegal in a number of states. But, in the end, laws weren’t enough to separate those whose love destined them to be together. One couple’s precedent-setting fight to assert this fundamental right provides the basis for the touching new historical drama, “Loving.”

The profound love between Richard Loving (Joel Edgerton), a white man, and his soul mate, Mildred Jeter (Ruth Negga), a black woman, was obvious for all to see. Unfortunately, such highly visible adoration also became a liability for the couple. In 1950s rural Virginia, such relationships were generally looked upon disapprovingly, even contemptuously, especially for those who dared display their affection publicly. What’s worse, these attitudes were backed by the force of the state’s anti-miscegenation law. Nevertheless, Richard was adamant about marrying his pregnant fiancée, and he sought to circumvent the legal restriction by wedding Mildred in the District of Columbia, a jurisdiction where no interracial marriage ban was in place.

After their simple civil ceremony, Richard and Mildred returned to their home in Virginia. But, not long after their return, they were arrested by the local sheriff (Marton Csokas) for violation of the anti-miscegenation law, despite possessing a legally valid marriage license from the District of Columbia. They were jailed and brought before the local judge (David Jensen), who had no tolerance for such “disdainful” relationships. The Lovings’ lawyer (Bill Camp), a friend of the judge, managed to negotiate a plea deal to get Richard’s and Mildred’s prison time dropped, but that arrangement hinged on their agreement to move out of state for 25 years. Given Mildred’s pregnancy, the couple agreed to the judge’s terms, and so they relocated to the city of their wedding ceremony, albeit reluctantly.

Virginia residents Richard Loving (Joel Edgerton, left) and Mildred Jeter (Ruth Negga, right) seek to circumvent the state’s anti-miscegenation law by marrying in the District of Columbia, a jurisdiction with no such restriction, in the moving, heartfelt new biopic, “Loving.” Photo courtesy of Focus Features.

While in Washington, the Lovings began raising a family, with Mildred giving birth to three children, two sons and a daughter. They lived largely free from persecution, but Mildred abhorred city life. She was concerned that her kids didn’t have an opportunity enjoy the pleasures of the country, a concern exacerbated when one of her sons was hit by a car while playing in the street. She desperately wanted to move back to Virginia and sought help to realize her goal.

With the rise of the civil rights movement in the early 1960s, Mildred wrote to Attorney General Robert Kennedy to seek his assistance. Her impassioned letter, in turn, led to a referral to an American Civil Liberties Union lawyer, Bernard Cohen (Nick Kroll), who agreed to take her on as a client. Aided by experienced civil rights attorney Phil Hirschkop (Jon Bass), Cohen viewed the Lovings’ situation as an ideal test case for the Supreme Court. And, even though Richard and Mildred weren’t especially anxious for the publicity that would accompany such a legal battle, their situation quickly gained national attention, particularly when they were featured in a Life magazine article titled “The Crime of Being Married” featuring images snapped by photographer Grey Villet (Michael Shannon). In the end, Richard and Mildred agreed to pursue the case, especially if a ruling in their favor would benefit not only them, but also others similarly situated in the 16 states that still had anti-miscegenation laws in place at the time. It proved to be a gamble that paid off handsomely, resulting in one of the landmark court cases of the civil rights era.

To say the least, the Lovings courageously faced their fears and lived the life of heroes in their pursuit of securing one of our most cherished fundamental rights. From the very beginning, they envisioned spending their lives together, despite the legal obstacles and regardless of whatever others thought. They pushed past these limitations and moved ahead with their plans, knowing what they were up against.

Such actions clearly reflect the efforts of determined practitioners of conscious creation, the philosophy that maintains we manifest the reality we experience through the power of our thoughts, beliefs and intents. Even if Richard and Mildred had never heard of this practice, their efforts and the outcomes that stemmed from them nevertheless mirror many of its inherent principles. They pictured what they wanted to achieve, formed beliefs to make it possible and forged ahead to bring it into being. There may have been challenges and setbacks along the way, but such obstacles helped galvanize them in their beliefs, making them ever more resolute to see their dreams realized.

The Lovings’ efforts had wide-ranging impact, too. In addition to giving legitimacy to their marriage, the ruling in their case granted legal status to countless other couples facing similar circumstances. The Supreme Court’s holding obliterated a patchwork of unjust laws that had been in place in some jurisdictions since before the American Revolution, a questionable centuries-old practice wiped out overnight by a sweeping unanimous decision. The ruling gave protection to those whose marriages had been technically illegal and opened the door to interracial marriage freedom for others going forward. The precedent set in this case also gave ample ammunition to those who sought, and later successfully secured, comparable protection for the marriage of same-sex couples.

To that end, the Lovings valiantly lived out their value fulfillment, the conscious creation concept associated with leading our lives as our best, truest selves for our own benefit and that of others. Their precedent-setting efforts changed the law and, subsequently, the culture, with an undeniable impact that has lasted ever since and that has often been applied by those in other contexts in search of justice of their own. And to think it all stemmed from something as simple as being allowed to openly profess one’s love for another. 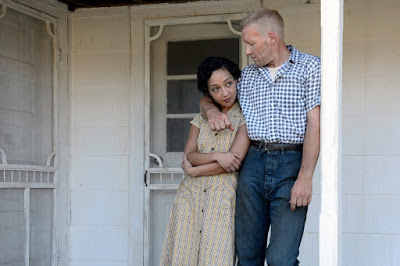 “Loving” beautifully depicts what it means to love someone, regardless of the impediments, a message that continually needs reinforcement when prejudicial attitudes threaten the sanctity of such relationships. Director Jeff Nichols’s heartfelt, personal take on the couple’s experience effectively shows the impact of a big story brought down to the human level, capably depicting how ordinary people deal with extraordinary circumstances. The film’s understated writing, nuanced performances and successful handling of legal issues that could have easily become unwieldy lend much to this well-crafted biopic, one worthy of all the accolades it has and will likely receive, such as its Palme d’Or nomination at this year’s Cannes Film Festival, the event’s highest honor. Despite some occasional pacing issues in the second hour, this picture is truly one of the standout offerings of this year’s awards season releases.

It’s mind-boggling that something as simple as the issue debated here should be allowed to become so needlessly complicated. The beliefs that create hindrances seem intrinsically unnecessary, even patently ridiculous. But sometimes it takes working through – and past – such obstructions to help us understand and appreciate the importance of these precious and valued concepts. Thankfully, we have role models like the Lovings who help us see the wisdom in pursuing, protecting and preserving them. We owe them a lot, but they would probably take the praise in stride, given that all they really wanted was to be with one another. And for them, and for many others like them, that may ultimately be enough.