‘Blade Runner 2049’ explores what it means to be human

Our love of freedom is undeniable. But, if we consider it so important, then why do we continue to shackle ourselves and our peers to various forms of enslavement? Some of these permutations may not be readily obvious, but their impact invariably serves that very purpose. And, when we imbue our existence with elements reflective of the foregoing, we have to ask ourselves what kind of reality are we manifesting and what does it really mean to be “human” (even if we dress up their associated manifestations in seemingly palatable packaging)? Those are among the questions raised in the long-awaited (and long-overdue) sequel to a legendary 1982 sci-fi classic, “Blade Runner 2049.”

Set 30 years after its predecessor, “Blade Runner 2049” continues the story begun in its forerunner in which renegade artificial life forms known as “replicants” are “retired” by special police forces, known as “blade runners,” before they can wreak havoc. Designed as servants to their human masters, replicants have long been known to become dangerous and unpredictable as their preset life-spans near an end, despite measures aimed at ameliorating such tendencies. And, ironically, those charged with carrying out the retiring these days are themselves artificial life forms whose stability has been improved upon compared to older models.

In the world of 2049, a time in which prevailing conditions have declined even further from the dystopian conditions present in this story’s predecessor, LAPD blade runner “K” (Ryan Gosling) is charged with retiring an aging replicant (Dave Bautista). In doing so, however, he stumbles upon a mystery – one involving the discovery of an ossuary buried on his target’s property. Under the guidance of his superior officer (Robin Wright), K launches an investigation with potentially staggering implications, including the fate of his fellow artificial life forms, as well as the future of humanity itself. 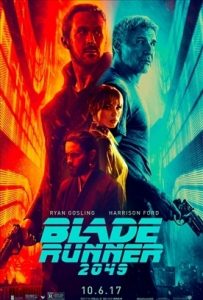 To say more would reveal too much of the plot, suffice it to say that K’s investigation brings him face to face with a variety of issues, including his own origins, the meaning of existence, the role of memory in our lives, our treatment of others and the impetus to rise to our own greatness. And, as he proceeds through this journey of discovery, K encounters an array of intriguing characters, including the head of the corporation that manufactures replicants (Jared Leto) and his trusty but cunning aide (Sylvia Hoeks), a Fagin-esque child slave dealer (Lennie James), an artificial memory programmer (Carla Juri), the leader of an emerging replicant rebellion (Hiam Abbass), and a pair of blade runners from the past (Harrison Ford, Edward James Olmos). What K ultimately uncovers will prove startling, with ramifications beyond imagination.

Like its predecessor, “Blade Runner 2049” explores what it means to be “human,” be it in a natural or artificial form. Is it governed by biology or technology, or is it determined by some other factor, such as consciousness? In light of that, then, is it possible that one form is superior to the other, or is it merely a case of a master-slave relationship? Do the distinctions matter, or are they simply different expressions of an identical underlying principle that just takes different paths to manifestation? Given these considerations, the lines between what many of us might deem distinguishable suddenly become blurred and seem far less important. What does matter, however, is how these materializations arise in the first place, and that’s where the practice of conscious creation comes into play, the philosophy that maintains we manifest the reality we experience through the power of our thoughts, beliefs and intents.

From what takes place here, it’s apparent that humans and replicants both possess consciousness and form beliefs about the nature of their existence. How they each view their reality, however, differs markedly. Natural-born humans see themselves as superior, an outlook that they believe justifies their right to subjugate their artificial counterparts. But, if replicants possess essentially the same cognitive abilities as their self-described masters, is their suppression acceptable? Can we realistically say, as freedom-loving humans, that it’s proper to oppress our manufactured cousins by subjecting them to degrading tasks and imbuing them with traits that constrain their ability to exist and grow? Is that what being “human” is all about?

Such issues crop up in multiple contexts in the narrative of “Blade Runner 2049.” No matter which one gets addressed, these questions repeatedly arise and demand attention, and at the heart of all of them are the beliefs that birth these conditions in the first place. As replicants increasingly grow into their sense of consciousness, as increasingly sentient beings they seek to be able to engage in the same kinds of activities – and to posses the same fundamental rights – as their biological makers. And, if we truly claim to be human, how can we realistically deny them such opportunities? If we do, then we’re clearly something other than what we contend to be.

One of the ways in which this is apparent among the replicants is in their desire to grow and evolve, to push past limitations and become more than they have typically known themselves to be. This is very much in line with the basic premises of conscious creation, which maintain that we’re all intended to exceed the boundaries that define us and to pursue our fundamental birthright that we’re all in a constant state of becoming. They thus seek to engage in some of the most integral activities that define us as human beings.

Aspirations like this probably seem reasonable to the rational and fair-minded among us. But, for those who feel they stand something to lose – such as the perpetuation of a sense of superiority and inflated self-importance – these kinds of ambitions might seem inherently threatening, a challenge to their claim of self-avowed entitlement. Under conditions like this, then, is it any surprise that tensions and conflicts would arise?

What’s even more unsettling is when the oppressed begin to show signs of becoming oppressors themselves. However, if they learn the ways of their tormentors (and adopt beliefs comparable to those who’ve historically bullied their creations), it’s only natural that they might be tempted to mimic the ways of their masters, inflicting on their peers the same kind of treatment to which they’ve been subjected.

Scenarios like this thus illustrate the importance of the role responsibility plays in the conscious creation process. When we engage in a particular type of activity or seek to create a particular outcome, the results carry consequences, some beneficial, others questionable. The objectionable ramifications are often bad enough in themselves, but, when the impressionable begin to emulate them, we leave a legacy that’s doubly troubling. Again, if we contend we’re beings who ascribe to principles that make us human, we must carefully consider our perspectives and the intentions underlying them. With a lack of foresight, there’s no telling what might ultimately manifest.

In many ways, “Blade Runner 2049” is a significant cautionary tale to us all, with important messages on multiple levels, advice we’d be wise to consider in terms of how we treat one another and what we should demand to expect for ourselves. Should we ignore these warnings, though, we may well put ourselves on the path to the kind of future depicted here. Is that what we really want? If not, we’d better pay attention.

Stylistically beautiful and imaginative, impeccably well acted, and incredibly intelligent in its narrative, “Blade Runner 2049” hits many of the right notes right on the head. It’s especially impressive that the film does not place an overreliance on special effects or action sequences to carry the story. Major props go to Gosling, Ford, Wright and Leto for their outstanding performances, some of which are easily award-worthy.

However, despite these many strengths, a few of the picture’s elements feel forced and decidedly off. Several unduly intrusive subplots and narrative twists needlessly dilute the main story, impinging on the main thrust of the film. Certain elements also seem deliberately aimed at setting up a sequel, with questions left decidedly unresolved. And, with a runtime of 2:45, the film easily could have used some judicious editing. Director Denis Villeneuve’s effort is so well executed in so many ways that it’s unfortunate these shortcomings keep this offering from achieving the true cinematic greatness it otherwise could have attained.

With all that said, however, “Blade Runner 2049” is still worthwhile viewing. If we truly hope to grow into an enlightened and hopeful future – one far removed from the world depicted here – we need to take a good, hard look at what we believe makes us human and start living up to it. We’re at a critical juncture in our evolution at the moment, and we could easily go one way or another. Let’s hope we draw from the messages of this film to help us make the right decision.