In an age as cynical as ours, it’s rare to come upon someone who genuinely appears to say what he means and mean what he says. That’s especially true for those in positions of authority; their statements often ring hollow or are rife with hypocrisy. So it’s indeed refreshing to find out that there are those out there who defy the odds, a subject explored in the new Wim Wenders documentary, “Pope Francis – A Man of His Word.” 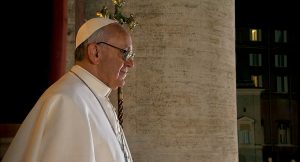 Given the unprecedented access that the filmmakers were granted to the Pontiff, this documentary represents an unprecedented production. Through a series of interviews with His Holiness, as well as footage from many of his public appearances, director Wenders has compiled a comprehensive composite of the Pope’s views on a variety of spiritual and secular subjects, many of which themselves represent fundamentally unprecedented changes in attention and direction for a religious institution that has resisted change, remained stifled in its outlooks for ages and taken an often-oblivious approach to addressing the problems of the world.

Over the course of the film, the director intercuts footage of the Holy Father with re-created segments depicting the life of St. Francis of Assisi, the figure who inspired Argentine Cardinal Jorge Mario Bergoglio to choose his adopted name upon his ascendancy to the papacy. Like his namesake, Pope Francis has followed an unprecedented path of his own. As the first Jesuit and the first pope from the Americas to be selected to fill the role of pontiff, he broke many long-established traditions just by being who he is. Like his inspiration, Francis has also symbolically embraced a life of humility and poverty, being of service to those less fortunate and in need of compassion. Six years into his papacy, he still adheres to these ideals and preaches their attributes to others.

More than that, though, the Pope has stepped off the lofty pedestal many of his predecessors refused to leave, candidly addressing topics that the Church has seldom broached. For instance, Francis has been an outspoken advocate for protecting the environment, regularly proclaiming that we are the stewards of God’s creation – and that we’ve been seriously failing in that role. Likewise, he has expressed views on employment, workers’ rights, family life, gays and other subjects that have typically not been on the agendas of popes before him. In that sense, he has changed the nature of the papacy to one that believes of its fundamental importance of being in the world, not above it looking down from some self-important ivory tower. 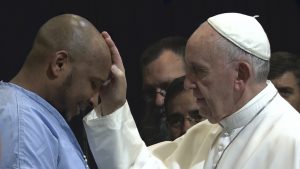 Francis has also backed up his words with actions. For example, his travels routinely take him to places where previous pontiffs would not tread, such as prisons, refugee camps and illness-ridden field hospitals. Like his namesake and in the spirit of Jesus, he has endeavored to reach out to those most in need of assistance. At the same time, however, he’s completely comfortable in the presence of world leaders, many of whom are depicted in the film and to whom he has no hesitation in frankly conveying his views. Through his acts and deeds, he clearly demonstrates what it means to be a man of his word.

Of course, Francis has not ignored the spiritual side of life, either. Through his interviews in the film, he expresses the absolute need for forging a profound sense of divine connectedness. But, in doing so, he stresses the importance of a connection that has practical implications, seeing the divine in everyday life and ordinary situations, not just in abstract, theoretical terms that have little pertinent relevance. He even encourages adopting qualities atypical of many religious figures, such as approaching life with a sense of humor, something rarely preached from the pulpit.

These views are clearly reflective of the beliefs Francis holds, and they’re responsible for making possible what he seeks to achieve. That’s the cornerstone of the conscious creation process, the means by which we bring the reality we experience into being. And, even if the Holy Father hasn’t heard of or doesn’t specifically adhere to the tenets of this philosophy, he’s quite a master of them nevertheless. 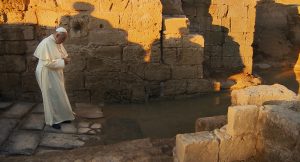 As leader of a global institution with millions of followers, he inspires those to whom he ministers to take up these causes and make them realities, to believe, as he does, in the possibility of bringing them into existence. And, when they do, they engage in powerful acts of co-creation, one that merges the efforts of not only multiple terrestrial beings, but also those of the earthbound and the celestial. Quiet an outcome, to be sure.

Although Francis may not use conscious creation terms per se in spreading the word of his message, he nonetheless leads by example of the beliefs he espouses, notions that, if accepted and adhered to by his flock, are capable of working tremendous wonders in a world much in need of them. And, in a time like ours, we should be grateful for such an opportunity.

While many of the questions posed to the pontiff in the film are admittedly somewhat on the softball side and some of his responses are indeed sermon-esque, most of his insights are truly quite candid, even when couched in metaphorical or humorous terms. What’s more, the film offers little information on the background and private life of the man behind the robe, but its clear, concise, ever-respectful presentation of his outlooks and their importance for the world are spot-on. This is truly worthwhile viewing, regardless of whether or not you’re Catholic. 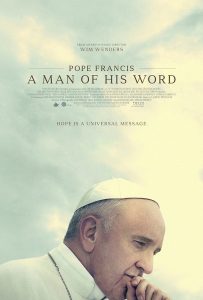 At the risk of playing devil’s advocate, some have questioned the motives of this pope – on both sides of the ideological spectrum – and, in light of that, it’s always possible that he might merely be a good actor. However, in watching this film, it’s pretty easy to see the apparent sincerity in his words and expressions, that he’s the real deal and someone whose insights can truly be trusted. Let us hope that’s really the case.