Get Your Intuition On!

A Voice told Bill Bennett to slow down. “Slow Down?” he thought. “I want to speed up to catch the green light.” Bill was on his way to the airport. The Voice told him again “SLOW DOWN!” So he did. Those precious seconds bought Bill his life. A transport truck barreled through the intersection, and Bill was within a hair’s breadth away from sure death. It made him wonder. “Who or what was that Voice? Where did it come from?” Join Frankie Picasso and yours truly on a special edition of The Good Media Network’s Frankiesense & More as we interview Bill about his life-altering journey, as detailed in his new documentary, “PGS: Intuition is Your Personal Guidance System.” Tune in by clicking here for a fascinating discussion. 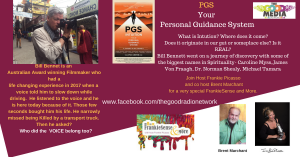