Skip to content
Home/Conscious Creation, Documentary, Movie Reviews/‘Little Gandhi’ inspires the visionary in each of us

‘Little Gandhi’ inspires the visionary in each of us

It’s been said that one catches more flies with honey than with dung. While that may be true in many circumstances, it can be a tricky practice in political circles. If nothing else, though, it can make a statement, regardless of whether its objectives are met. So it was with an unconventional but fearless nonviolent activist fighting for change in his beleaguered homeland, the subject of the compelling new documentary DVD release, “Little Gandhi.”

Peaceful protest has often inspired activists to seek change in political regimes in dire need of it. In 2011, with the Arab Spring movement sweeping across the Middle East from Tunisia to Libya to Egypt, the initiative soon made its way to Syria, home of the Bashar al-Asaad regime, one of the world’s most brutal dictatorships. Continuing horrific practices initiated by his father as far back as the 1980s, Asaad ruled with unquestioned authority, relentlessly doling out punishment without regard for the welfare of the nation’s citizens. Such atrocities, combined with a corruption-riddled administration, signaled that this was a situation long ripe for change.

Under conditions like this, there was a natural tendency among many activists to want to lash out in anger. But one of those who stepped to the fore to encourage a different path was Ghiath Matar. Rather than combating the Syrian government forces ordered to put down opposition, Matar suggested an inspired alternative – making their voices heard but treating the troops with kindness and courtesy, offering them flowers and bottled water as gestures of goodwill.

Why such an unconventional strategy? Matar believed that distributing flowers and water would defuse the situation before it escalated out of control. According to his colleagues, Matar saw flowers as a symbol of life, something he wanted to affirm through his protests and convey to his opponents. He was convinced that such gestures of peace would help undermine the plans of those ready to engage in violence. To Matar, giving flowers and water to the security forces was also a way of showing them that the protestors did not believe the troops were the enemy, that they were all Syrian brothers and that (one would hope) brothers would not fire on brothers.

When protests in Matar’s home town of Daraya began in March 2011, the activists followed through on their plan. The flowers were seen as kind offerings, and the bottled water was much appreciated among soldiers on duty in the desert heat. These gestures and the troops’ responses took authorities by surprise, so much so that they scrambled to come up with a strategy to regain control over their forces. They even went so far as to try and convince the soldiers that the activists had poisoned the water, a ruse that fell apart when the protestors opened the bottles and began drinking from  them. Matar’s plan proved successful, revealing him to be someone wise far beyond his 26 years.

Matar’s initiatives were not without precedent. Nonviolent protest was a standard practice in the 1960s American civil rights movement led by Dr. Martin Luther King Jr. and his followers. And the distribution of flowers was a favorite placating tactic employed by Vietnam Era protestors, who frequently dispensed blooms to National Guard troops called upon to keep the peace at antiwar rallies. But measures such as these were perhaps most readily associated with Indian peacemaker Mohandas Gandhi, who made use of them in helping his nation earn independence from the British Empire in the 1940s. In fact, it was his legendary efforts that inspired the nickname attributed to Matar, Little Gandhi. 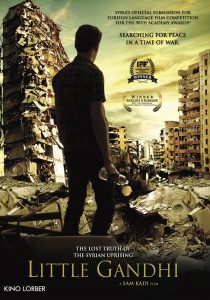 With the assistance of such fellow protestors as Najlaa Alsheikh, Osama Abu Zayd, Motaz Morad, Ghiath Shurbaji, Muhammad Shihadeh, Shafeek Abdulaziz, Muhanad Abu Alzen, Rana, Mohammed Namous and Hassan Abo-Kinan, Matar quickly developed a formidable peaceful opposition network. His hope was that its efforts would raise awareness for the cause, one aimed at ousting Asaad without the nation erupting in what he believed could be a bloody civil war. He and his followers were treading on shaky ground, but they persisted in their efforts nevertheless. They were convinced that now was the time for a regime change; they believed they had the momentum on their side as the Arab Spring movement made considerable headway throughout the region, leading to such huge accomplishments as the toppling of long-time Egyptian president Hosni Mubarek, a leader whose corrupt administration had held power for decades.

Matar’s efforts didn’t go unnoticed by authorities, however. He was constantly threatened by officials, forcing him to stay mobile, often having to seek refuge in farmland hideouts in the areas surrounding Daraya. This wasn’t easy for a newlywed husband and father-to-be, but he did what it took to stay out of sight while planning his next protest. However, when Matar and fellow protestor Yahya Shurbaji were arrested, circumstances took a drastic turn.

Not long after his capture, Matar was tortured and killed. International outrage erupted when word of his death spread far and wide. Foreign leaders condemned this horrendous act, with the ambassadors of many Western nations, including U.S. Ambassador Robert Ford, defiantly attending his funeral.

Unfortunately, with Matar’s death, what he feared the most came to pass – a protracted and bloody civil war, one that left his home town in shambles. In fact, as the film sadly shows, the fighting continued years after the conflict began. This becomes apparent during war zone interviews with activists Motaz Morad and Muhammed Shihadeh, whose comments are frequently interrupted by the sound of gunfire in the background.

What’s more, nearly all of the activists interviewed in the film have been forced to flee Syria. Even though they still actively support the pro-democracy movement, most now live in exile, primarily in Turkey. They are among the approximately 5 million refugees who have fled their homeland in search of safe haven outside their nation’s boundaries.

As for Matar, an organized effort to destroy all records of his efforts – and even of his existence – has been implemented by Syrian officials to squelch any inspiration his memory might evoke. Even photographs of the activist are hard to come by these days. But, despite this purging and Matar’s tragic death, the ideas he inspired can’t be killed. The spirit of Little Gandhi lives on.

Bringing about the kinds of changes that Syrian activists have sought is quite an undertaking. It requires considerable effort, not only for the activities in which they engage, but also in the ideas they devise to make those reforms a reality. They must sincerely believe in what they seek to accomplish, materializing their dreams through the conscious creation process, the philosophy that maintains we manifest the existence we experience through the power of our thoughts, beliefs and intents.

For Matar and his followers, their belief in seeking change is firmly rooted in the faith of their convictions. They knew that reform had to come. For instance, the relentless surveillance of everyday citizens was so pervasive (and intolerable) that most Syrians had come to believe, as activist Mohammed Namous put it, “The walls have ears.” The need for reform had become so plainly apparent that some protestors, like Ghiath Shurbaji, said, without hesitation, “We must change our reality.” Spoken like a true conscious creator.

Many of the activists began cutting their teeth on this subject in 2003, when they made their initial forays into invoking reform. This preliminary exploration helped prime their enthusiasm for what would follow years later, laying a foundation for the grander plans that were to come. It also helped to promote a spirit of cooperation, the kind of unity needed to make acts of co-creation work.

On top of that, though, the initiative required thinking outside the box, overcoming the limitations of conventional thought that might otherwise hold them back or thwart their efforts. This is where Matar’s nonviolent protest strategy came into play. His plan to engage in gestures of kindness and courtesy rather than aggression and hostility kept the rallies from turning violent and derailing the groundswell of support that the campaign was building.

Admittedly, Matar and his colleagues were taking a big chance in implementing their plan. Considering the brutality of the Asaad regime, they could have been made to vanish in an instant. But change seldom results from playing it safe, and Matar’s example lit a fire amongst his peers. He inspired confidence and courage among the activists, helping them to allay the fears that might have otherwise stopped them in their tracks – and keeping the campaign from ever getting off the ground.

Given what happened to Matar, some might question the wisdom of his efforts. However, where would we be as individuals or as a species if we didn’t take chances, following the impulses of our beliefs to see where they lead us? Perhaps visionaries like Matar are the seed planters, invoking ideas that they don’t fulfill personally but who build the platforms on which their ultimate manifestations are constructed. They become the legends who inspire generations of followers who see through on his vision, a testament to his dream and a tribute to the man who birthed the notion into being. And there’s certainly something to be said for that.

This stirring profile of an enlightened visionary leaves quite an impression on the viewer. As Syria’s first-ever entry in the Academy Awards’ best foreign language film category, “Little Gandhi” presents a gripping collection of archive footage from the protests and the civil war, as well as enlightening interviews from activists, authorities and experts, most of whom witnessed the events firsthand. Director Sam Kadi has put together a fine tribute to its heroic subject, one that is sure to motivate those seeking to bring about change where it’s needed, no matter how daunting the conditions might be.

The planet could use more individuals like Ghiath Matar, especially now, and not just in Syria. Let us hope there are impressionable initiates out there who are willing to follow in his footsteps to bring all of us what we crave – and deserve. Indeed, the time has come for all of the other Little Gandhis of the world to step forward and take their rightful place in destiny.