Skip to content
Home/Conscious Creation, Documentary, Movie Reviews/‘The World Before Your Feet’ explores fulfillment for its own sake

‘The World Before Your Feet’ explores fulfillment for its own sake

Mountaineer George Mallory became famous (although some would say infamous) for three little words he uttered to a New York Times reporter in 1923 when describing his multiple attempts to ascend Mt. Everest, the world’s highest peak – “Because it’s there.” It’s an expression that’s become virtually synonymous with embarking on a daunting endeavor simply for its own sake. Such undertakings are truly impressive, even if they’re not for everyone. Indeed, where would the spirit of human adventure be were it not for this kind of attitude? So it’s been for an intrepid urban hiker who undertook the challenge of walking all 8,000+ miles of roads, paths and bridges in New York’s five boroughs, a journey gorgeously chronicled in “The World Before Your Feet,” available on DVD and video on demand.

When someone attempts the previously untried, especially when it’s of an awe-inspiring magnitude, onlookers may think the adventurer inspiring or crazy. Accomplishing such a never-before-achieved feat is extraordinary, no matter how one ultimately views it. But the lingering question associated with such a venture still remains, “Why?” That’s especially true when the endeavor requires a radical alteration of one’s lifestyle and priorities. However, for former civil engineer Matt Green, the effort has truly been a labor of love.

Over the course of six years, filmmaker Jeremy Workman followed Green on his ambitious odyssey. Through it all, the director filmed many miles of his subject’s travels. Shot during all four seasons in all five boroughs, Workman captured beautiful images of one of the world’s greatest cities, including many that seemingly defy countless preconceptions held about New York. And, as Green’s journey was being documented, he further chronicled his effort by taking innumerable photos of his adventures, posting them along with his thoughts and impressions in an ongoing blog. 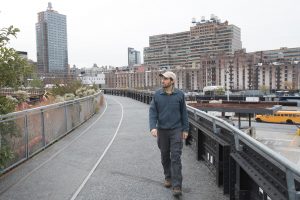 Former engineer Matt Green has made it his mission to walk all 8,000+ miles of New York’s streets, paths and bridges as chronicled in the new documentary “The World Before Your Feet,” available on DVD and video on demand. Photo courtesy of Greenwich Entertainment.

As enterprising as this project might seem, in some ways it was nothing new to the inner city wanderer. Prior to taking on this task, Green walked across the U.S. from Rockaway Beach, NY to Rockaway Beach, OR. In both of these ventures, he learned to live simply, retaining only the most basic of possessions and freely accepting help whenever it was offered. In his New York journey, for example, since he was not gainfully employed, he kept a roof over his head by looking after friends’ homes, cat sitting or sleeping on the couches of those who generously offered him accommodations.

As Green made his way throughout New York, he found his journey was not only one of touring the city, but also one of wondrous discovery. Having time to live without the burden of most of the everyday obligations we all feel we must address has given him an opportunity to notice the little things that make up the city he calls home. He has been able to gain an appreciation for the elements that constitute Gotham that many of us obliviously overlook. It’s also enabled him to focus on subjects that he’s found personally intriguing, from the quirky to the sublime. For example, he’s paid particularly close attention to things like New York’s surprisingly diverse plant life, from trees to flowers to fruits and vegetables growing wild in a diverse array of community and public gardens. He’s also documented considerable information and images about the five boroughs’ “churchagogues” (former synagogues that have now become churches or other houses of worship); New York’s many 9/11 memorials, some official, some makeshift, all stirring and heartfelt; and the city’s vast selection of hair and beauty salons, especially those that somehow manage to slip the letter “z” into their names.

More than that, though, the journey has helped Green discover much about himself, something that many of us seldom take the time to assess and that he didn’t do as often as he might have when he was living a typical professional middle class existence. However, having been seriously injured in a bicycle accident before he began his journeys and living through the ordeal of a brother who experienced a severe stroke at a young age, Green realized that tomorrow isn’t promised. And, from that, he concluded he didn’t want his life to pass him by without taking the time to get to know himself better, something that the time afforded by his cross-country and New York journeys enabled him to do.

It was a decision that required him to make major adjustments in his life, such as breaking off relationships that he couldn’t sustain and divesting himself of nearly all of his belongings. But, for him, it was worth it. He learned that he could live comfortably and contentedly without the shackles that previously bound him (and that, quite frankly, bind most of us). The liberating effects have been more than worth the trade-offs, a consideration that may deserve a look for those of us who are restless or discontented and believe that there might be other possibilities for the way we live our lives. The sheer joy that Green gets from doing what we wants, when he wants and on his terms would seem to bear that out. 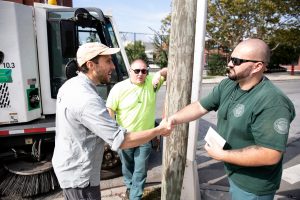 Sanitation workers (center and right) are among the many diverse people urban hiker Matt Green (left) has encountered during his journey to walk all 8,000+ miles of New York’s streets, paths and bridges as seen in the documentary “The World Before Your Feet.” Photo courtesy of Greenwich Entertainment.

There’s a commonly held notion that likely began in the philosophical community but that has since found its way into everyday discourse – the idea that “everything happens for a reason.” To many, though, that might sound rather implausible in cases like this: What’s really to be gained from walking every mile of New York’s streets? To be sure, the true purpose behind such ventures could easily be well hidden from view, even from the individuals who have undertaken them. In all likelihood, however, there is a motivation, intent or reason driving the endeavors; the trick is discovering what it is. And a good place to start looking is with one’s beliefs, for they provide the foundation that drives the conscious creation process, the philosophy that maintains we draw upon this intangible resource for shaping the reality we experience.

There are a number of possible belief-based explanations for such undertakings, even if their origins aren’t readily apparent or discernible either by casual onlookers or those who are bringing them into being. Those who undertake these projects may not have heard of the conscious creation process, either. But that doesn’t mean that the underlying beliefs birthing these manifestation are absent.

From information that’s revealed in the film, Green admits that he isn’t completely aware of why he’s doing what he’s doing but adds that he feels compelled to do it. Whatever the underlying motivation, though, it’s obvious he has a strong sense of self, something that seems to have long been present, even before he began his urban adventure. After the health crises that he and his brother experienced, for example, he obviously had the presence of mind to recognize that life isn’t promised, that it can evaporate before our eyes, a realization that led to a belief in the need to live our lives while the opportunity is available. That kind of personal awakening often leads individuals to undertake projects for their own sake – like walking every mile of the streets of New York.

As noted above, this has enabled the self-discovery that Green has come to value so much. And that’s something fairly significant in itself, something many of us never take the time to investigate. So, to the skeptics who wonder what the purpose behind this venture might be, this alone is a pretty important reason. 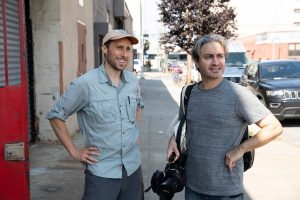 Big city wanderer Matt Green (left) and director Jeremy Workman (right) have collaborated to produce a beautiful homage to the street life of New York’s five boroughs as seen in “The World Before Your Feet.” Photo courtesy of Greenwich Entertainment.

But this is by no means the only possible explanation. It could also be seen as an exercise in stretching one’s creative capabilities, of pushing through limitations to achieve what might have previously been thought to be unattainable. It’s about finding ways to make seemingly impossible dreams happen when we set our mind to it. It’s about being faithful to honoring our own most heartfelt intentions, making it possible to become our truest, most authentic selves and being able to rightfully claim that we’re living our lives with personal integrity.

The foregoing considerations are examples of the conscious creation principle of value fulfillment, the concept whereby we use the process to become who we were meant to be for the betterment of our selves and those around us. In Green’s case, his venture is an inspiration to others, whether they’re replicating what he’s doing or attempting something of a comparable scale. What’s more, the findings he’s amassed through his odyssey represent a wealth of information that no one else has probably compiled, something that may not have happened without his efforts. Even if this material isn’t open to commercialization or is interesting only to a limited few, he’s still fulfilled a beneficial purpose that has previously gone unaddressed. Again, there’s much to be said for this, and we can thank Matt for his accomplishments, no matter how eccentric or unconventional.

This stunningly beautiful homage to an incredible city, an inspiring individual and the value of living life in the moment entertains while it enlightens, taking viewers on an odyssey of more than just the many striking attractions that Gotham has to offer. It also surveys the beauty within each of us, the parts of ourselves that we seldom see but that are just as magnificent as any surface trappings. For his part, Matt Green got a glimpse of that and liked what he saw. At first glance, one might be tempted to say that that’s a nice little gift to himself, a benefit of being fortunate enough to have the time to figure out how to live unburdened by the hindrances of modern-day life. But he’s not the only one to benefit from this; by sharing his experience, he’s shown us how we can all do the same for ourselves if we have the will and character to choose to do so. 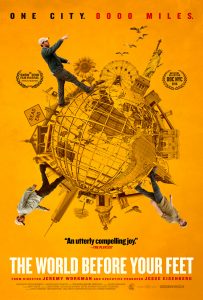 Some may say there’s no commercial value in taking on ventures like the one that Matt Green has tackled. But, as his experience has revealed, must that always be the case with anything that we undertake? Sometimes the sheer enjoyment value of pursuing such personally meaningful quests is far greater than anything that money can buy, and, thankfully, there are still those among us out there who haven’t lost sight of that.