‘Mike Wallace Is Here’ charts the quest for one’s calling

Finding one’s calling in life is often challenging enough, but, in an emerging industry or profession, it can be that much more difficult. Pioneers in such endeavors frequently require some time to find their footing and their voice, generally going through a process of trial and error to find the right fit. Some won’t succeed and will move on to different ventures, but others are fortunate enough to come up with the right mix that suits their needs and those who they serve. So it was for an aspiring newsman in the early days of television, a journalist who went on to become a legend in his own time, a story told in the engaging new documentary, “Mike Wallace Is Here.”

Virtually anyone who watched television in the last few decades of the 20th Century knows the name Mike Wallace (1918-2012). The intrepid, no-nonsense, hard-hitting interviewer of everyone from celebrities to kings made quite a name for himself at CBS News, primarily through his work on the groundbreaking news magazine 60 Minutes. But such success was far from instantaneous.

As the documentary shows, Wallace took some time to find his voice. In the early days of TV, he recalls, those who worked in the field did a little bit of everything, from newscasts to talk shows to commercials to hosting or participating as panelists on game shows. Given this diverse range of job requirements and responsibilities, TV professionals of the time often had to grope their way through the flotsam to discover what best suited them. And, for Wallace, commercials and game shows didn’t cut it. 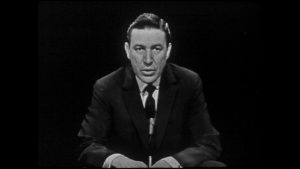 Wallace got his first glimpse of what he wanted to do in 1956, when he was tapped to host a live late night interview show called Night Beat (later renamed The Mike Wallace Interview). Through this largely one-on-one interview format, Wallace had conversations with a wide range of luminaries in politics, activism, entertainment and the arts. It gave him a chance to interview some of the living icons of his time, such as architect Frank Lloyd Wright, former First Lady Eleanor Roosevelt, abstract artist Salvador Dali and Twilight Zone creator Rod Serling. But it also was here that he cut his teeth on asking probing questions, as seen, for example, in an often-tense conversation with Ku Klux Klan leader Eldon Edwards.

Despite his emergence as a skilled interviewer, Wallace’s career came to an abrupt halt in 1962, when his son Peter was killed in a mountain-climbing accident in Greece. In the wake of this incident, and with his interview show having completed its run, Wallace went through an intense period of introspection. Having come to the realization that life is not guaranteed, Wallace realized that he wanted to take charge of his life and career, focusing his attention on what he really wanted to do most, the kind of penetrating interviews at which he had become proficient.

Wallace joined the staff of CBS News, a somewhat daunting move for him in light of the network’s long-standing reputation for scrupulous journalistic excellence. Wallace found it intimidating given his lack of formal training and suddenly finding himself working alongside such broadcasting legends as Walter Cronkite and Edward R. Murrow. Seeing himself as something of an outsider who needed to prove himself, Wallace worked diligently to establish himself as a credible reporter, one worthy of being part of the ranks at CBS. 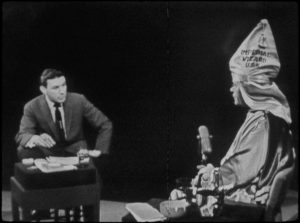 Wallace’s career-changing break came in 1968, when he teamed up with producer Don Hewitt and fellow correspondent Harry Reasoner to create 60 Minutes, an experimental television news magazine. The format and content were unlike anything else on the air, and even the trio of creators had no clear idea of what they wanted the show to be in its early days. They tried doing many different kinds of stories, approaches that were seen as inventive and revolutionary. But, despite such critical acclaim, the series was a ratings flop, nearly always coming at the bottom of the list of network shows and constantly on the verge of cancellation.

Fortunes turned around in the wake of the Watergate break-in. Having covered Richard Nixon’s presidential campaign, Wallace knew all of the principals in the White House – and who were caught up in the scandal. Such access enabled 60 Minutes to do a number of stories related to the incident, such as a telling interview with White House counsel John Ehrlichman, all of which helped give the show a huge bump in ratings. At last the program had found its legs and was now ready to run.

In the ensuing years, Wallace and fellow hosts Dan Rather and Morley Safer helped cement the show’s reputation as a television staple, eventually becoming the top-rated series on the air, quite a coup for a news-based program. In addition to its political stories, 60 Minutes conducted investigative reporting segments, insightful pieces about science and technology, probing interviews with world leaders like Egyptian President Anwar Sadat, Russian President Vladimir Putin and Supreme Iranian Leader Ayatollah Khomeini, and celebrity interviews with the likes of Johnny Carson, Barbra Streisand, Bette Davis, Oprah Winfrey and Shirley MacLaine. Wallace even conducted an interview with an up-and-coming real estate developer named Donald Trump who, ironically enough, claimed to have no interest in politics.

Through his work, Wallace became synonymous with hard-hitting journalism. In fact, many of those who followed in his footsteps claimed that he served as their model for this style of reporting, an observation offered, for example, by former Fox News commentator Bill O’Reilly during an interview, ironically enough, conducted by Wallace himself.

But, while Wallace was largely credited with turning the journalistic exposé into an art form, he was also criticized for a certain degree of sensationalism. While he didn’t succumb to the bombastic style of many of those who followed him, he was nevertheless censured by some who claimed that he frequently exhibited qualities more readily associated with showmanship than with journalistic objectivity. The jury is still out on that one, but this criticism came up more than once and has managed to modestly but persistently cling to his legacy.

It’s interesting to note that, when the tables were turned on Wallace, he was not as candid with those who interviewed him as his subjects often were with him. In interviews with colleagues Barbara Walters and Morley Safer, for example, Wallace frequently holds back, answering questions with questions or deflecting the inquiries asked of him. For instance, in clips from such conversations, he’s reluctant to speak about subjects like his lifelong battle with depression and the death of his son. But, when it comes to talking about his vocation, he freely acknowledges his belief in the importance of work and that we should all make the effort to do the same, regardless of what we do, because that’s what really counts in the end.

All of which brings us back to the opening paragraph of this review – the importance of finding our calling and following through on it. But, if this is something at which we have no practice, how do we determine what our calling is and to bring it into being in our lives? That’s where the impact of the conscious creation process comes into play, the philosophy that maintains we manifest the reality we experience through the power of our thoughts, beliefs and intents. It’s hard to say if Wallace ever heard of this philosophy, and, given his penchants for thoroughly scrutinizing tangible facts and maintaining a high degree of skepticism, it’s likely he probably would have readily dismissed the idea out of hand. Nevertheless, that doesn’t change the fact that his life experience eloquently reflects his mastery of the principles that make it work – and in grand fashion.

Wallace’s belief in his abilities, once he determined what he wanted to do, was formidable. Even though he occasionally wrestled with concerns over whether he’d measure up compared to his pedigreed peers, he nevertheless developed a tremendous awareness of, and faith in, his interviewing and investigating skills. He proceeded fearlessly in approaching his stories, and he developed an impressive reputation for getting at the truth, particularly with his “gotcha” style of questioning. Those whose misdeeds were in need of being exposed often felt utterly vulnerable, but, for those who were harmed by such wrongdoings, his journalistic heroics were widely applauded. 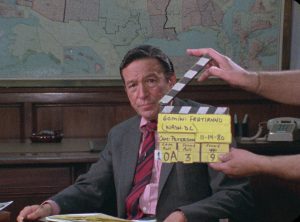 On the set of a 60 Minutes segment, journalist Mike Wallace prepares for one of many interviews he conducted during his 38 years with the show, a legacy examined in detail in the new documentary “Mike Wallace Is Here.” Photo courtesy of Magnolia Pictures.

In fact, Wallace was so intent on getting the word out that he even crossed swords with his own employer on occasion. This was perhaps most apparent with a 60 Minutes story about tobacco industry whistleblower Jeffrey Wigand, a Brown & Williamson biochemist who exposed the company’s tampering with its cigarette blends by adding chemicals to make them more addictive. When lawyers for CBS News advised pulling the original segment in favor of an edited version, citing breach of confidentiality concerns that could lead to a multibillion-dollar lawsuit against the network, Wallace fought to air the unedited story intact. The original version would eventually be broadcast, but not until after considerable criticism was leveled against the news magazine for caving in to corporate pressure. (Wigand’s story, told in the feature film “The Insider” (1999), portrays Wallace as complicit with the attorneys’ recommendations, but this documentary contends otherwise.)

Wallace’s commitment to his craft was undeniable, so much so that he was willing to try the untried. By pushing through limitations and so-called unbreachable barriers, he took interviewing and investigative journalism in entirely new directions. Many of his innovative approaches not only moved forward the progress of 60 Minutes, but they also helped influence the many news magazine progeny that followed. His willingness to ask the tough questions, the kind that more timid reporters were afraid to broach, distinguished him and his eagerness to get to the truth. Indeed, it came to characterize his value fulfillment, the conscious creation principle associated with being our best, truest selves for the betterment of ourselves and those around us. And, on this point, he succeeded brilliantly.

This in-depth look at the life and career of one of television journalism’s most influential reporters reveals how he significantly helped to reshape an industry and its practices. Through interviews before his death in 2012, as well as a wealth of archive footage, viewers witness the seasoned reporter at work in his many diverse conversations. The film also features interviews of Wallace conducted by colleagues Morley Safer, Barbara Walters and his son Chris Wallace in which he guardedly reveals his personal side, including a secret he never discussed with anyone. The overall package paints a picture of someone who opened up the profession to new tactics and styles of questioning, as well as to scrutiny about how far is going too far, an engaging documentary about a fascinating individual. Earlier this year, director Avi Belkin’s offering earned a Grand Jury Prize nomination in the documentary category at the Sundance Film Festival. 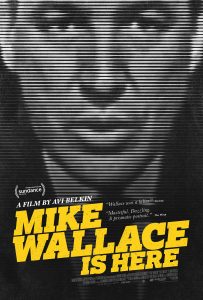 When we find our calling, it should be a cause for celebration – and a sign that it’s time to get to work on fulfilling our destiny. It may take us a while to reach that point, but we should look to ourselves and our beliefs to search for clues in uncovering what that entails. If we commit to that, as Mike Wallace did, there’s no telling what we can accomplish. And that’s certainly news worth sharing.