When we look upon the works of artists of any stripe, we often gape in awe, admiring their output and wondering how they came up with their creations. We may even somewhat enviously say to ourselves “I could do that.” But, if so, why aren’t we? Do we lack the talent or resources? Are we intimidated that we won’t measure up? Or are we just unmotivated? If we really want it happen, we can do it, but we need to get ourselves in gear. Perhaps all it takes is a little inspiration, the kind served up in the uplifting new documentary, “Love, Antosha.”

Actor Anton Yelchin (1989-2016) was seemingly born to entertain. As the child of Soviet figure skaters Irina and Viktor Yelchin, the Leningrad-born Antosha came to the U.S. when he was six months old as rising anti-Semitism began to threaten the family’s security and well-being. After their arrival in California as officially sanctioned refugees, a young Anton began to show a talent for acting. In home “movies” made by the youngster, Anton did more than just aimlessly goof off in front of the video camera. He told stories and proudly proclaimed credit for all aspects of his productions. He was clearly on his way. 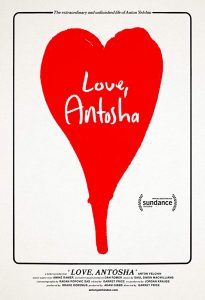 Not long after he began taking acting lessons, Anton’s teacher told his mother that he was ready to go on auditions. Irina and Anton were surprised – this was something they were primarily doing for fun – but they decided to follow the coach’s advice. And it worked. Before long, Anton was picked for several commercials and then small television roles. His success with these projects, in turn, led to frequent movie work all throughout his teens and into his twenties.

In addition to his acting work, Yelchin was an accomplished musician, becoming proficient on the guitar after only a handful of lessons. He went on to perform in clubs in greater Los Angeles, earning quite a following. On top of that, he became adept as a photographer, model, writer and voice-over performer, having contributed to a number of animation and video game projects in the “Smurfs” franchise. And, if that weren’t enough, he was an aspiring filmmaker, having become well versed in film history and a variety of cinematic styles. Yelchin was truly a Renaissance man at a tender age with a bright future ahead of him.

But Anton was not without his challenges. He suffered from cystic fibrosis, a condition that required him to practice a regular and rigorous regimen of breathing exercises to stay healthy. He also had an ability to so immerse himself in his roles (particularly those of a dark nature) that he sometimes seriously worried those who cared about him. However, that ability to go within and to get in touch with himself is what made him so effective as a performer, one who completed nearly 70 film and TV roles in his brief career.

Even with such a full plate, Yelchin still managed to find time for those near and dear to him. He adored his parents, especially his mother. He was close to many of his co-stars, especially Kristen Stewart and Jennifer Lawrence, as well as Martin Landau, who saw Anton more as a contemporary than someone decades his junior. But, perhaps more importantly, he stayed life-long friends with many of his childhood acquaintances, preserving the closeness of those relationships, something that often falls by the wayside among Hollywood types when they become famous.

Considering everything Yelchin had to offer professionally and personally, he was deeply loved by those who knew and worked with him. Which is why his death at age 27 in a freak accident was so tragic. When his parked vehicle began rolling backward in his home’s steep driveway, he became pinned between it and a security fence, cutting off his breath, a fatal condition for someone with cystic fibrosis. One of the brightest lights in Hollywood went dark in an instant, cutting short one of the most promising careers in the business.

Those who struggle to express themselves creatively may think it unfair that one individual can be so artistically gifted. But Yelchin had a burning desire to do it all, so much so that many of his colleagues observed that it seemed like he never stopped working (pursuits that Anton himself probably didn’t even see as work). From this, then, it’s apparent that he was proficient in the ways of the conscious creation process, the philosophy that maintains we draw upon the power of our thoughts, beliefs and intents to manifest the reality we experience. Even if Yelchin had never heard of this practice, he certainly mastered many of its principles and put them to use in his creative output.

Yelchin’s creativity seemed to know no bounds. In addition to everything he accomplished, he had many ideas in mind for projects to come at the time of his death. Most notably, Yelchin was preparing to direct his first film, “Travis,” an homage to the Martin Scorsese classic “Taxi Driver” (1976), one of Anton’s favorite movies. Many elements of the production had already come together, including the financing, an increasingly challenging feat in today’s filmmaking landscape. This was more proof that he was eminently capable of envisioning his dreams, believing in their validity and seeing them come into being. It would have been interesting to see what he would have come up with.

In fulfilling these attainments, Yelchin proceeded fearlessly, unencumbered by whatever perceived limitations might stand in his way. To have accomplished as much as he did in such a short time is truly astounding, something that never would have happened if he had allowed himself to be deterred by obstacles. This is particularly true where his health was concerned. He was not about to let his condition bog him down, even if meant having to undertake an arduous treatment program in order to remain physically – and thus artistically – viable.

Based on his output, to say that Anton was a visionary is truly an understatement. His creativity seemed to come to him naturally, and this quality became reflected in his portrayals, even as a youngster. For example, in his first professional role on the TV series ER as a child grieving the loss of a parent, he was called upon to cry on camera, something that’s difficult enough even for seasoned veterans. Not for Yelchin, though; he came through as though he had been doing this sort of thing for years, a natural on the set in every sense of the word.

Anton’s success to a great degree came from his ability to tap into his intuition, one of the elements that contributes significantly to the formation of the beliefs necessary for manifestation. It enabled him to sense what was needed to play a role and to materialize it in his portrayal, a quality that made his performances appear so utterly natural.

Ironically, though, Anton’s intuition also filled him with uncomfortable feelings at times. For example, while on a movie shoot in a cemetery, he grew visibly uncomfortable, a trait that the film crew thought was simply part of his performance. But, after the fact, those who knew Yelchin have come to speculate that his genuine discomfort may have been indicative of a sense of things to come. Not long after the shoot, the actor went through a difficult stint with his health, one that necessitated an intensive treatment period to help him get his physical state back on track. And, unfortunately, his tragic death came shortly thereafter. These events thus can’t help but lead some to wonder whether he was aware, on some level, of his impending demise. That, in turn, may have impelled the sense of urgency he seemed to feel when it came to his work, to get as much completed as possible with the time available to him.

Given Anton’s life experience and the challenges he faced on various fronts – escaping the growing threat to his safety in his homeland, his chronic health condition and perhaps an unsettling awareness of his future – it’s obvious that he deeply and sincerely appreciated the gift of life. He made this apparent in many ways, such as the endearing notes, messages and greetings he sent to his mother, effusively expressing his gratitude for the life that she gave him. And, because of this, it’s clear he felt it important to make the most of what time we have in this existence, to live our lives and to creatively express ourselves to the fullest extent possible. He set a high standard, but he gave us all an impressive and inspiring measure to emulate.

A career cut short by tragedy may not seem like it would provide much material for a filmmaker to work with, but, when it comes to the prolific output of Anton Yelchin, there’s plenty to draw upon – and to look back upon in awe and melancholy. Director Garret Price’s new documentary shows just how much living Yelchin packed into his 27 years, with so much more left in the tank that he never got a chance to express. This bittersweet tribute to a multitalented (and underappreciated) artist features a wealth of clips from Yelchin’s many film and TV appearances and his many musical performances, along with a star-studded array of interviews from those who worked with him, those who knew him as a friend and the parents who adored him. Despite some occasionally sluggish pacing in the first 30 minutes, the film nevertheless manages to evoke a curious mixture of wonder, sadness and fondness in recognition of someone taken too soon. “Love, Antosha” is currently playing in limited release in theaters specializing in independent and documentary films.

When we reach the ends of our lives, one would hope that we’d approach the finish line without harboring any regrets, especially when it comes to things we wish we had done. Indeed, there are perhaps no more tragic lines than those that begin with the words “If only I had….” Even though Anton Yelchin’s work may not have been complete at the time of his death, he certainly packed more into his short lifetime than many of us might do over one several times its length. He showed us the joy and fulfillment that comes from aggressively engaging in such pursuits – so that we don’t end up lamenting what we left unfinished.