Thoughts on the Moment

Recent events on both a national and global scale have given me pause to reflect on where we are and where we might be going. There are no easy answers, and opinions likely vary widely, depending on one’s own particular circumstances. As a consequence, this time in history could turn out to be a great tragedy – or a tremendous opportunity. This question is, “Which will we choose?”

While pondering these matters, it dawned on me that I addressed this subject several years ago in the Epilogue to my most recent book, Third Real: Conscious Creation Goes Back to the Movies. At the time, events were well on the path to spinning out of control, but circumstances were nothing like they are at the moment. What I wrote at the time was based on speculation, hunches and a prediction for what could happen – and what might result from it if we didn’t heed the warning signs and take them seriously in mapping out what kind of future would result from them. I also explained how the contents of that book could potentially play into the ideas covered in the Epilogue. 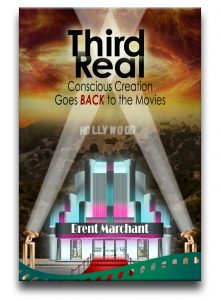 Upon re-reading the Epilogue text one recent afternoon, I realized how much of what I wrote three years ago is relevant to our current conditions. So, in light of that, I decided to republish this excerpt from Third Real in the hope that it may provide some insights to those who don’t know what to make of our present circumstances – and what to do about them as we move forward into an immensely uncertain future.

While the main thrust of my writing is about movies, my Epilogue observations only deal with them tangentially. The Epilogue has more to do with conscious creation – the philosophy that maintains we manifest the reality we experience through the power of our thoughts, beliefs and intents – and what we should do with this practice. As I have noted in all three of my books, movies provide us with examples we can draw from in shaping our beliefs, but, in this Epilogue, unlike the main text of my titles, I make only passing references to specific films. For detailed illustrations, read the main text of my books, since here I’m choosing to focus on the principles underlying them – and how we might draw upon those concepts in moving forward. Goodness knows, with what’s happening these days, I can’t think of a better time to do that – in earnest and, preferably, as soon as possible.

With that said, here is the Epilogue to Third Real, edited minimally [in brackets] to provide context for present conditions and to incorporate elaboration and clarification not contained in the original. End notes have been retained for attribution and additional clarity where needed.

I hope you find my words from the past useful in the thoughts of today.

Time To Get Real

Toward the Creation of a New Paradigm

“Forward movement is not helpful if what is needed is a change of direction.” ―Dr. David Fleming1

For quite some time now, political, business and social activist leaders have been saying that we need to fix our world, that we need to set things on a path that moves us forward. But, truthfully, as noble as those sentiments may be, what have such statements actually gotten us? As I write this [in 2017], we’re in a world beset by a host of issues that, if anything, only seem to be getting worse, not better.

As a general rule, I like to think of myself as an optimist, believing in the hope of a better future. With infinite probabilities and the limitless potential of conscious creation at our disposal, I’d like to think that we can collectively manifest great things. Indeed, as [author and conscious creation advocate] Jane Roberts wrote in Seth Speaks, once we realize that we create reality with the power of our thoughts, beliefs and intents, we’re no longer enslaved to events and circumstances, that we can birth an existence that we want.2 And, through it all, I’ve always contended that we can draw inspiration from the arts, particularly film, to help show us the way to achieve that goal.

I touched on these points in the Epilogues of this book’s two predecessors. In Get the Picture?!, I wrote of the endless possibilities conscious creation enables and how we can look at movies as examples of how to realize them.3 And then, in Consciously Created Cinema, I picked up on that notion and suggested that we apply it to improving the prevailing circumstances of our world.4 But, given how drastically and dramatically events have unfolded (dare I say deteriorated) in recent years, I feel as though my words may not have been emphatic enough. In light of that, then, let me put it this way: I believe it’s time we get real about putting conscious creation to use to bring a new paradigm into being.

I have addressed this idea through a number of the film summaries in [Third Real]. Virtually all of the entries in Chapters 7 and 8, for example, present cautionary tales that deal with issues great and small that merit attention from all of us. But simply showing concern or paying lip service may no longer be enough. Conditions, I believe, have reached a point where we earnestly need to put our beliefs and deeds into action to address these matters before they get away from us. As observed in [Jane Roberts’s] The “Unknown” Reality, Volume 1, “If some changes are not made, the race as such will not endure.”5

Now do you see what I mean about getting real? [As discussed in this book’s Introduction,] I’m convinced that we’re truly on the verge of our own third reel/third real moment, and we’d better get busy before it escapes us and the credits start to roll.

So how, exactly, do we go about this? First and foremost, we must wake up and understand how our world comes into existence and from whence it originates. Then we must put those methods into practice, with clarity of thought, open-mindedness and carefully crafted manifesting beliefs. However, as this Epilogue’s opening quote suggests, this may call for a revolutionary new way of thinking, one that’s not focused just on fixing what we have, but of striking out in an entirely new direction. Of course, to do that, we must also deconstruct what’s in place, particularly ridding ourselves of beliefs that no longer serve us. For instance, as Jane Roberts wrote in The Individual and the Nature of Mass Events, if we cling to notions like “you can’t change human nature” or adhere to beliefs that “man’s nature is to be greedy, a predator, a murderer at heart,” we’re unlikely to advance ourselves into a new world.6 Instead, we’ll remain mired in circumstances that grow progressively unbearable as we continue to materialize a reality based on such unsavory core assumptions.

Given that, it would seem it’s time to change our tune and to employ the means and methods designed to realize an outcome in harmony with that new melody. In addition to drawing upon the conscious creation basics outlined in Get the Picture?! and Consciously Created Cinema, we can also tap into the ideas covered in [Third Real] to manifest a radically new reality. The concepts and themes of the chapters chosen for Third Real were carefully selected to get us past some of the pitfalls that can derail or impinge upon our materialization efforts. They’re all designed to provide us with greater precision in our conscious creation practices, a new and enhanced degree of aptitude intended to not only move us forward, but also to shepherd us in a new direction.

It’s especially worth noting that this is something we need to do collectively, the point behind the inclusion of Chapter 10, [concerning co-creation,] in this work. We need to get past the idea that we’re separate and apart from one another, instead embracing our acknowledgment that we’re all in this together, innately connected and part of a greater integrated whole. Thus, if we’re truly inescapably linked to one another, then we all need to participate in the unfolding of this scenario (and, one would hope, in a way that leads to its advancement). And the more of us who realize this, the better off we’ll be. Jane Roberts foresaw this in The Individual and the Nature of Mass Events, in which she wrote that we’re on the verge of creating an improved mass reality, one with fewer frightened people, fewer fanatics and a mindset geared toward birthing an idealized existence.7 Should we succeed at this, we raise the possibility of “enrich[ing] the race, and bring[ing] it to levels of spiritual and psychic fulfillment.”8 That’s quite a destiny – so why not make it our value fulfillment, [the subject of this book’s Chapter 11,] as well?

When we imagine the possibilities, we conceivably have much to look forward to. But, if it’s to occur, it’s clearly up to us. We must be willing to allow it and then to make it happen. Indeed, as many who have had various paranormal experiences have been told, “A new world awaits you if you can take it.”9

Are we up to that challenge? I’d like to think we are. I know I am. So, if this is something we’d like to bring into being, I once again propose the kind of metaphysical call to arms that I raised in the conclusion of Consciously Created Cinema.10 As we load our own third reel onto the metaphysical projector of life, let’s get busy – and work together toward that happy ending all of us want.

1 http://www.goodreads.com/quotes/tag/paradigm-shift. Environmentalist Dr. David Fleming (1940-2010) was the author of Lean Logic: A Dictionary for the Future and How to Survive It (2011).

9 This has largely occurred with those who have had UFO encounters, though it has also come up in other paranormal contexts, such as in channeling sessions not unlike those that Jane Roberts experienced in her contact with her noncorporeal writing partner, Seth.