‘Life of Pi’ looks for meaning in the unlikeliest of places

The search for the meaning of life is as old as mankind, and countless thinkers have devoted innumerable hours pondering it. But not all of those seekers have been scholarly intellects residing in ivory towers; some have been average, everyday folks thrust into the unlikeliest of places or circumstances. Yet, no matter what conditions may prevail, they proceed with their searches in earnest, hoping to make sense out of the seemingly nonsensical, as is the case in the mythic new adventure, “Life of Pi.”

To hear it told, Professor Piscine Militor Patel (or “Pi” for short) has lived quite a remarkable life, though most people would probably never know it from meeting him. As an adult (Irrfan Khan), Pi lives a quiet life in Montreal with his wife and children, a far cry from the eventful days of a childhood and adolescence that he doesn’t talk much about. But, when word of that captivating upbringing catches the ear of an aspiring writer (Rafe Spall), Pi keeps his silence no longer and shares the story of his life.

Pi was born and raised in Pondicherry, India, a community that had once been under French control. Because of this, Pondicherry was influenced by a variety of religious, spiritual and metaphysical traditions, including those of the local Hindus and Muslims, as well as the Western teachings of Christians and rationalists. Pi was thus exposed to a wide variety of ideas growing up, and, as a serious and studious young man, he took them all to heart in an attempt to understand his world and his place in it.

Pi’s father, Santosh (Adil Hussain), was the proprietor of a privately owned zoo housed in the local botanical garden. He, too, was exposed to the same traditions as his son, but, as a businessman interested in the ways of the modern world, he took a much more “pragmatic” approach to life, choosing to embrace reason as his guiding principle. Santosh told his young son to “enjoy the stories” of the ancient religious traditions but urged him to take a rational approach to life, firmly believing that reason, and not “superstition,” would ultimately see him through life’s challenges.

With this background in place, the stage was thus set for Pi when he would come face to face with the biggest test of his life – and his faith – as an adolescent (Suraj Sharma). With changing political conditions and possible economic hardship looming, Santosh announced his plan to sell the animals in his zoo and use the funds to relocate his family to Winnipeg, where new business opportunities – and a new life – awaited them. Pi initially railed at the idea, but, when left with no choice, he was forced to go along with his father’s decision. And so, before long, Santosh, Pi, his mother Gita (Tabu), his brother Ravi (Vibish Sivakumar) and the family’s animal collection boarded a Japanese freighter bound for Canada.

Leaving India behind was painful for Pi. But it wasn’t nearly as devastating as what would happen next. During a powerful Pacific storm, the freighter capsized and sank. Pi’s parents and brother were lost, but he managed to escape, making his way to one of the lifeboats. He wasn’t alone, either; several of the animals managed to join him, including a zebra, a hyena, an orangutan and, most significantly, an adult Bengal tiger named Richard Parker. Thus began an incredible journey of survival, self-discovery and transformation for the young man who would clearly come to see the inner world of his beliefs reflected back to him through the eyes of another – and one who wasn’t even human.

This is the story that Pi tells his friend the author, who hangs on his every word. But is Pi’s story truly how things happened? Or is it his own version of one of “those stories” his father cautioned him about, a tale to be enjoyed but not to be taken literally? That, of course, is a question that viewers of “Life of Pi” must answer for themselves.

So much of what Pi experiences while lost at sea brings back the lessons of his youth. He comes to see the relevance and value of the various teachings he learned from the different religious, spiritual and metaphysical traditions he was exposed to while growing up. He experiences firsthand how the principles underlying those disciplines can serve him during this challenging time of personal growth and development, a true test of his integrity, morality and fortitude. And, fortunately, for his sake, he has the wherewithal to recognize their significance as they happen, enabling him to appreciate the wisdom of the teachings and their applicability to his current circumstances.

Indeed, the reality of the shipwreck draws sharply into focus the notion that our outer world is a mirror of our internal beliefs, one of the primary concepts behind conscious creation. And, because Pi so devotedly embraced the many spiritual traditions he encountered in his youth, he’s built up a storehouse of enlightened outlooks that make up the inherent character of his inner world, many of which are not only spiritual concepts but conscious creation principles as well, including the following:

• All things that manifest in our reality, for better or worse, happen for a reason, even if we’re not aware of that fact at the time we experience a particular phenomenon. The origin of such manifestations always begins with us, and their materialization is made possible through our relationship with our divine collaborator. This is true whether the phenomena are clothed in either metaphorical or practical guise. Understanding this also goes a long way toward appreciating the true nature of religious parables, those stories that provide us with valuable nuggets of insight about our relationship with the divine, the nature of our true character, and the joys and challenges of daily living.

• All of our experiences inevitably help to prepare us for what is to come in our lives, again, even if we’re not aware of it at the time they occur. For instance, Santosh is an avid swimmer, having embraced it as a means to overcome a childhood health issue. So, because he saw swimming in such a beneficial light, he strongly encouraged a youthful (and sometimes reluctant) Pi to become proficient at it, an ability that would obviously prove positively essential years later when he was adrift at sea – and in a better position to see its merit.

• An awareness of the foregoing notions leads to a better understanding of how the Universe fundamentally works and how our reality unfolds, and this is a skill that only gets stronger with more practice. This, in turn, allows us to achieve greater degrees of mastery and control over our abilities as conscious creators.

• Paying attention to life’s synchronicities, no matter how seemingly improbable and, again, whether clothed metaphorically or practically, gives us a richer sense of our lives and how they blossom. In many ways, such awareness speaks directly to the “rational” approach to life that Santosh so passionately adheres to. But it also falls in line with the spiritual traditions Pi has so fervently embraced, disciplines that rely on such “knowing” as a means to better understand our divine conscious creation partner.

• Given that the existence we experience stems from us working in collaboration with our divine co-creator, there’s nothing that comes to us that we haven’t had a hand in manifesting. Therefore, there’s value to be had in everything we experience, for better or worse. It means that we dwell in an inherently “safe” Universe, one that helps provide the means for our personal growth and development and will not give us more than we’re capable of handling. This is particularly true in the areas of facing our fears, overcoming limitations that impede our advancement and enabling us to grow stronger as individuals, as Pi discovers for himself repeatedly in his often-tumultuous relationship with Richard Parker.

• If we truly believe in the power of All That Is to provide us with materializations that are in line with our beliefs, wants and needs, then we must have faith in its ability to so comply. To that end, we need to let go of our expectations regarding the form those manifestations ultimately take. We must relinquish our control over the “how” of materialization and let the Universe provide, for, as author and conscious creation advocate Jane Roberts observed, it invariably “leans in our direction.” Pi witnesses this repeatedly while shipwrecked. For example, when he pleads with the Universe to supply fish to feed the ravenously carnivorous Richard Parker and meets with no success in catching any on his own, a school of flying fish appears miraculously, seemingly out of nowhere, filling the boat with food that more than meets the big cat’s needs. The intention was thus fulfilled, even if it didn’t take the form Pi was expecting. In that regard, then, we’d all be better off if we just sit back and let All That Is do its thing; it’s far more capable than we could ever hope to be at coming up with solutions that effectively fulfill our requests.

Clearly, “Life of Pi” has much to offer in the way of metaphysical and spiritual insights. Regrettably, however, these eloquent, profound ideas aren’t always conveyed as well as they could be. The many notions it touches upon aren’t always developed as fully or presented as coherently as they might have been. Perhaps it’s because there are so many notions vying for viewer attention that they end up unwittingly competing with one another. The expectation of profound “aha!” moments is instead met with a series of underwhelming “oh, ok” moments. A stronger, better defined script would have gone a long way toward alleviating this problem.

Uneven pacing, an issue all too common in director Ang Lee’s work, makes its presence felt again in this film, and correcting this deficiency may have also helped clarify the picture’s messages. For instance, the movie’s opening sequence, which provides the necessary setup for what’s to come, goes on unduly long and is somewhat clumsily handled. We’re introduced to two of the film’s principal characters – Pi as an adult and his author friend – through a bland, plodding and sometimes seemingly pointless conversation that can’t help but cause viewers to legitimately wonder “Who are these people, why are we meeting them and why we should care?” As a consequence, the director nearly loses control of the room in the first 30 minutes. Admittedly, Lee redeems himself somewhat as the picture progresses, but the impact is somewhat watered down by the ill-handled opening.

Despite these faults, “Life of Pi” is exquisitely filmed, with terrific cinematography and excellent special effects (even if it doesn’t always make the best use of its 3-D technology). The picture also features a fine performance by first-timer Sharma, capably handling the exacting demands of the role of unexpected castaway, and a lovely, emotive soundtrack. It’s unfortunate that the quality of the rest of the film doesn’t measure up to that of these strengths; if it had, this would have been a truly epic picture, but, instead, viewers are left with an ambitious near-miss.

Meaning has a way of showing up when one least expects it, even under the most unforeseen conditions. That should give us all hope to go on, no matter how seemingly dire the circumstances are. “Life of Pi” illustrates that (albeit not always as effectively as it could), but it nevertheless inspires us to keep searching, for, in the end, we’ll never know what we’ll find unless we continue looking. 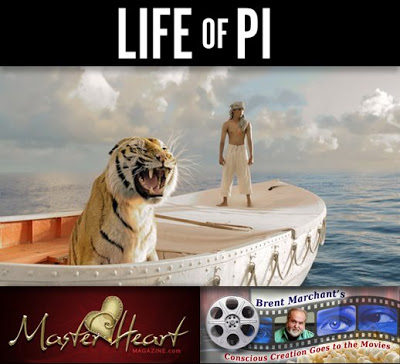