As any sports enthusiast can attest, it helps to have a game plan to achieve victory. The same is true in life, a challenge made all the more onerous when hampered by extenuating circumstances. The search for solutions under such conditions can be quite trying, too, as is revealed in the edgy romantic comedy, “Silver Linings Playbook.”

Pat Solatano Jr. (Bradley Cooper) has a full plate to manage. Having been released from a mental health care facility where he was committed after flying into a jealous rage and assaulting the lover of his cheating wife Nikki (Brea Bee), he’s now attempting to reintegrate himself back into the routine of everyday life. He’s placed in the custody of his parents, Dolores (Jacki Weaver) and Pat Sr. (Robert De Niro), a risky proposition for an aging couple that has its own share of challenges to contend with, such as dad’s unemployment, his tendency toward obsessive-compulsive behavior and his habitual bookmaking on Philadelphia Eagles football games. Yet the folks’ issues pale in comparison to those of their son, who, despite eight months of treatment, is still seriously in need of getting a grip on reality.

While it’s important that Pat Jr. get a handle on his bipolar condition (diligently taking his meds and following the advice of his psychiatrist (Anupam Kher) would probably help), it’s more crucial that he make the attempt to face his life realistically. Specifically, he needs to address his denial regarding the state of his marriage, which, for all practical purposes, is over. Nikki wants nothing to do with Pat, even going so far as having a restraining order imposed against him, prohibiting all contact with her.

Nevertheless, Pat still loves Nikki, and he sincerely believes she still loves him. He’s desperate to prove his devotion and that he’s a changed man, and he’s willing to do anything to rekindle their romance, no matter what the cost. And, despite the odds seemingly being stacked against him, he’s convinced he can achieve the results he wants. Pat believes “silver linings” are not only possible but a foregone conclusion as long as he maintains a positive attitude and takes the right steps from his personal playbook to achieve them. But is this a realistic outlook or uncontrolled wishful thinking?

Not long after his release, Pat attends a dinner party hosted by his friends Ronnie (John Ortiz) and Veronica (Julia Stiles), one of Nikki’s best girlfriends. At the party, the couple introduces Pat to Veronica’s younger sister, Tiffany (Jennifer Lawrence), a recent widow with her own share of personal issues. Tiffany quickly takes a liking to Pat (her cool, detached way of showing it notwithstanding), but Pat resists her advances, citing the fact that he’s married. Tiffany tries to win him over, however, by mentioning that she’s occasionally in contact with Nikki through her older sister. She even says that she might be able to slip Nikki a letter from him, a clear violation of Pat’s restraining order, but a chance that both Pat and Tiffany are willing to take, each for their own very different reasons.

Pat ultimately decides to take Tiffany up on her offer, but she agrees on one condition: that Pat be her partner in an upcoming dance competition. Pat initially dismisses the idea, but, when faced with the prospect that this might be the only way to get a message to Nikki, he relents and agrees to Tiffany’s request. Much to his surprise, he quickly finds this new partnership quite enjoyable. In fact, dancing proves to be very therapeutic, enabling him to achieve focus in his life in ways that other measures previously haven’t allowed. Of course, the positive changes in Pat’s life occur as a result of more than just the dancing; his relationship with his partner has something to do with it, too. And, as the intimacy between the partners grows, it becomes apparent that something more than just two-stepping may be going on. It just might even make Pat forget all about wanting to see his message delivered.

Grasping the essence of our own reality is perhaps one of the most daunting tasks that budding practitioners of conscious creation will ever undertake. It requires waking up to the true nature of how our existence manifests, becoming aware of how our beliefs shape the character of the world around us. And that’s often difficult enough when we approach the task under “normal” conditions, but, when mental health issues get thrown into the mix, the challenge becomes that much more difficult (and one that those who are unaffected frequently misunderstand). Indeed, as conscious creation author Jane Roberts and her noncorporeal channeled entity Seth wrote in their seminal work The Nature of Personal Reality, mental illness is typically a condition in which those affected by it are generally incapable of reconciling the beliefs they hold for manifesting their realities with those employed by the rest of society, thereby creating a fundamental disconnect between the two. Overcoming that discrepancy thus becomes the principal task that the afflicted must face, one fraught with multiple challenges on multiple levels. And that’s essentially what Pat and, to a lesser degree, Tiffany must deal with if they ever hope to achieve peace of mind and contentment in their lives. The question, of course, is, will they be successful?

Getting to that point involves attaining mastery and control over one’s creations and the beliefs that spawn them. It requires an awareness of how the process works and the synchronicities that help point the way. It involves materializing elements that fill in the gaps needed to achieve happiness and fulfillment. But, perhaps even more importantly, it requires us to let go of the elements of our lives that no longer serve us, as well as whatever ego-driven pride that we’ve allowed to become associated with their creation. And all of this calls for a firm commitment on our part to see things through and to take responsibility for what we’ve done and will do going forward. That can be a pretty tall order for someone whose mental state is operating capably, but it can be that much more difficult for someone who’s combatting mental illness on top of it. Such are the challenges that the protagonists in this film must face, and most of us probably wouldn’t envy their burdens.

Fortunately, there are ways of compensating for inherent “deficiencies” that can help to keep us on track, and this is where the role of our conscience comes into play. Manifestations reflecting its presence in our lives can work wonders for keeping us in line. For instance, throughout the picture, Pat’s movements are shadowed by a policeman, Officer Keogh (Dash Mihok), who’s charged with keeping tabs on his actions and whereabouts. Whenever Pat gets out of line, the good constable always seems to have a way of showing up and reminding his subject of what he must to do to toe the line. To some this might seem like a strong-arm tactic, but, if Pat is ever to make good on the goals he’s set for himself, such scrutiny is a necessary creation to help ensure their fulfillment, and he should be thankful for manifesting the officer’s appearance whenever his presence would be most opportune. Anyone who has earnestly sought to realize a personally significant objective can no doubt relate to the value of such perfectly timed materializations and the benefits they ultimately afford, for, in the end, they just might yield success.

For all its strengths in exploring the foregoing themes, however, “Silver Linings Playbook” comes up short in many respects. The picture combines a strange amalgamation of elements that makes it come across like part “One Flew Over the Cuckoo’s Nest”, part Dancing with the Stars and part Monday Night Football, all wrapped in what is allegedly a romantic comedy. And I say “allegedly” here because the movie’s sometimes-edgy nature makes this label seem quite ill-fitting. A number of emotionally volatile scenes quite justifiably had me questioning “So this is a romantic comedy?”

Moreover, I found the film was often quite enamored with the sense of its own quirkiness, an all-too-obvious attempt at trying to keep the picture from being seen as what is essentially a formula film characterized by inevitable predictability. These qualities, in turn, give rise to some very uneven writing. When it’s on, it works well, but when it’s not, it becomes rather trying, especially in several scenes that seem to go on unduly long. Its examination of the mental illness issue is somewhat uneven, too, sometimes handled deftly and at others clumsily. (For those interested in a picture that truly approaches this subject well, I’d heartily recommend the Ben Stiller comedy-drama “Greenberg” (2010) instead.)

Despite these shortcomings, the film does have its share of laughs, as well as a number of fine performances. Lawrence and De Niro are both excellent in their respective roles and have to be seen as strong contenders for awards consideration. And, for their part, Cooper and Weaver handle their characters quite capably as well. However, these assets aren’t enough to save a picture that’s trying to come across as being better than it truly is.

Saving ourselves from ourselves is, arguably, one of the most valuable pursuits we can undertake in life, and having a good grasp on our conscious creation skills can go a long way toward this goal’s realization. And, in getting there, it certainly helps to have a playbook to show us the way. Unfortunately, the example set by this film has far too many diversions to set us on a meaningful path to success, and, by following it, those hoped-for silver linings just may remain as elusive as ever. 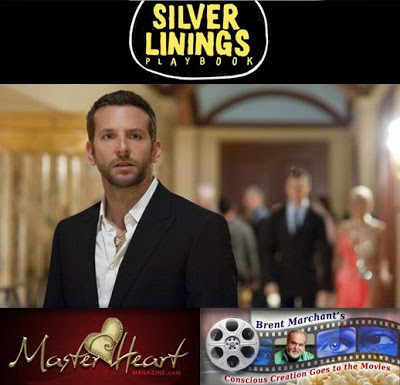 Photo courtesy of The Weinstein Co.