Bold moves often pay off in big rewards. Thinking through one’s aspirations, and then following them up with practical, inspired action, frequently yield tremendous benefits, not only for the initiator, but also for all who are touched by their realization. It’s a concept made plain in the sweeping new historical drama, “Lincoln.”

In January 1865, not long after Abraham Lincoln (Daniel Day-Lewis) was elected to his second term as the sixteenth President of the United States, the commander-in-chief oversaw the waning days of the American Civil War, an exceedingly bloody conflict that divided the nation and turned brother against brother. Yet, despite the heavy toll that the war had taken on the country, it was only a matter of time before the Union forces led by General Ulysses S. Grant (Jared Harris) would defeat their Confederate counterparts.

But Lincoln wanted more than just an end to the conflict; he also sought to have the House of Representatives pass a Constitutional amendment, to be sent to the states for ratification, bringing a formal end to slavery, one of the driving forces that prompted the outbreak of the war. And, even though he had issued the Emancipation Proclamation freeing the slaves two years earlier, Lincoln was uncertain whether this Presidential directive would successfully withstand legal challenges after the war’s end, so he wanted the amendment passed to ensure slavery’s demise – once and for all.

Since slavery had contributed so significantly to the nation’s deep, painful schism, Lincoln was convinced that ending this abomination was essential to reunite the country and heal its wounds. But, even more than that, he believed it was fundamentally the right thing to do. However, with the conflict quickly drawing to a close and the peace movement steadily gaining momentum, Lincoln had to act fast to see his goal realized. The nation had grown war weary, so there was strong support to end hostilities and negotiate peace with the Confederacy, regardless of what happened on the slavery issue. Even avid proponents of the amendment, such as Francis Preston Blair (Hal Holbrook), the founder of Lincoln’s own political party, believed the Union had to pursue peace overtures with the South, an initiative that the President reluctantly sanctioned to secure Blair’s backing for solidifying support for the amendment among his fellow Republicans in the House.

Appeasing both the abolitionists and the pacifists required Lincoln to walk a rather precarious tightrope, an effort that often required him to keep mum on certain matters, such as Blair’s peacemaking mission. And, to win over enough votes for passage of the amendment, he had to assemble a coalition of members of both political parties, an effort that took a great deal of old-fashioned horse trading to accomplish. However, with the zealous support of abolitionist legislator Thaddeus Stevens (Tommy Lee Jones), the pragmatic diplomacy of Secretary of State William Seward (David Strathairn), and the wheeling and dealing of lobbyist/operative William Bilbo (James Spader), Lincoln genuinely believed he could secure the amendment’s passage – provided that time didn’t run out on him first.

In addition to balancing all of his political priorities, Lincoln had his share of domestic challenges to juggle at the time. Chief among them was the ongoing emotional instability of his wife, First Lady Mary Todd Lincoln (Sally Field), who was devastated by the loss of their son Willie in 1862. The President and First Lady also wrestled with the decision of their son Robert (Joseph Gordon-Levitt) to enlist in the military, a move that both parents strongly opposed. Yet, for all of the trials and tribulations that Lincoln encountered in both his political and family lives, none of them would compare to the one he would face on a fateful evening at the theatre in April 1865.

Conscious creators who truly understand how the philosophy works realize that the external reality we experience springs forth from our internal beliefs and intents. The more aware we are of those aims, the more proficient we become at manifesting an existence that suits us. Indeed, the more clearly we express ourselves metaphysically, the more likely we’re able to attract to us materializations in line with our expectations. Inspiration thus soars, making potential solutions more readily apparent and goals more readily attainable. In essence, then, conscious creation, when properly executed, makes it possible to bring our internal and external worlds into alignment, marrying the intangible and the tangible, the theoretical and the pragmatic, even the idealistic and the achievable.

For his part, Lincoln understood this need for balance perfectly. He truly believed that noble intents could give birth to virtuous outcomes. But he also realized that practical means were frequently required to bring such results into being; vacuous optimism and purely altruistic arguments simply wouldn’t cut it. And, even if workable solutions didn’t instantly materialize when needed, he knew intuitively that they would synchronistically appear.

For instance, Lincoln was convinced that he could win over the support of representatives who were reluctant to back the Constitutional amendment, but he also knew that it would take more than just lofty speeches to get them in his corner. Some palms would need to be greased, some compromises would have to be struck and even some gentle arm-twisting was in order. But, given the tremendous stakes at issue – the elimination of slavery and the reunification of the nation – he wasn’t above employing such shrewd measures if they would further these causes and contribute to the eventual manifestation of his heartfelt beliefs. Those seeking fulfillment of idealistic objectives would be wise to take a cue from Lincoln’s success, because wishful thinking or merely hoping desired outcomes into being in most instances won’t suffice (at least as long as we choose to express ourselves as physical beings).

Lincoln was also acutely aware that it was unrealistic to bring about sweeping radical change all at once. Like many of his fellow abolitionists, he envisioned a nation in which the freed slaves would be able to enjoy a broad range of rights, such as voting. But, considering the magnitude of the change that abolishing slavery entailed, he realized that he couldn’t aggressively push such a progressive agenda at the time; getting an amendment passed to eliminate an institution that had been around since colonial times was quite an exacting ordeal in itself. Nevertheless, he was aware of the power of beliefs and of how ideas grow, so, with the amendment’s passage secured, he wasn’t averse to planting seeds for the future, introducing these notions into the national consciousness in hopes that they would one day take root (and we all know how those efforts eventually turned out).

Again, those looking to foment significant changes, be they in one’s own life or in society at large, should take a page from Lincoln on this. Even if the changes don’t occur in one’s own lifetime, that doesn’t mean they won’t eventually materialize. Individuals from all walks of life and all segments of society, from Susan B. Anthony to Jackie Robinson to Harvey Milk to Barack Obama, can attest to what the power of beliefs and their sustained nurturing can make possible.

Of course, none of us would get anywhere with this unless we’re also willing to face our fears. Drastic changes like those Lincoln sought to implement can be quite intimidating, if for no other reason than they involve trying the untried, stepping into the realm of uncharted territory, a daunting experience for many of us, to say the least. However, we’ll never know what can come from those dreamed-of probabilities unless we’re willing to take the first steps to explore them. As this film illustrates, Lincoln was willing to do that, and he set an example we can all draw from in our own pursuits into the unknown.

In many regards, “Lincoln” is quite an accomplished piece of filmmaking. As a period piece, it’s technically meticulous in its detail. And, as an actor’s showcase, it provides an excellent venue for the cast members to brilliantly show off their considerable talent, including Jones, Field, Strathairn and Holbrook, all of whom are strong, or at least potential, contenders for awards consideration. But Day-Lewis is the real star of this show; his magnificent portrayal of the beleaguered President easily makes him the frontrunner for best lead actor in this year’s awards competitions. In addition, John Williams’ beautiful original score, one of his best in years, provides a majestic musical backdrop for the action taking place on screen.

For all its virtues, however, “Lincoln” suffers from one huge undermining flaw – its tedious pacing. The campaign to secure passage of the Thirteenth Amendment is examined in such painstaking detail that the picture’s flow gets bogged down, resulting in a series of protracted talky sequences that can try the patience of even the most ardent history buff, yours truly included (at the screening I attended, audience members began walking out after only 45 minutes into the movie’s 2½-hour runtime).

In my opinion, the main problem is that the film never should have been made for the big screen. Since there is so little action and so much dialogue, “Lincoln” would have been a project much better suited to the small screen – as a public television broadcast or DVD – or as a stage play. It’s the kind of story that you want to watch when time isn’t an issue, perhaps while curled up on the couch on a gloomy winter afternoon or while spending a pleasant Saturday evening at the theatre. In its present form, however, it’s wasted on the big screen, rarely capitalizing on the attributes this cinematic milieu affords. Perhaps it will fare better as a home entertainment vehicle.

Still, despite this inherent drawback, the story in “Lincoln” is one worthy of being told. Were it not for the diligence of Lincoln’s efforts in securing the passage of the Thirteenth Amendment, the United States would likely be a very different country today. His passion, tenacity, practicality, leadership and skillful political maneuvering combined to bring about one of the biggest fundamental changes in the nation’s character, one that has often made it an example for other emerging democracies to emulate. And we’d all be wise to follow that inspired lead in our personal lives as well. 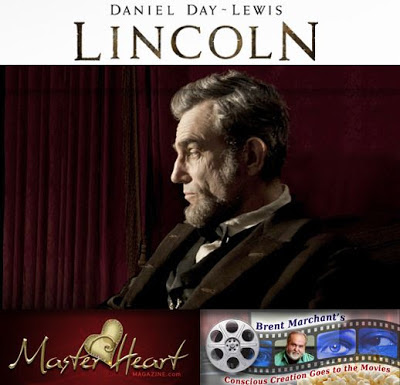