It’s always a joy to watch a master creator at work, no matter what endeavor is being pursued. The passion for producing one’s heartfelt desires is indeed something to behold, not only for the one ensconced in the creative process but also for anyone fortunate enough just to watch. Such is the focus of the engaging new biopic, “Hitchcock.”

In 1959, legendary film director Alfred Hitchcock (Anthony Hopkins) was at the top of his game. Having just released “North by Northwest,” yet another in a string of successful pictures, he was riding high in Hollywood. Or was he? The master of suspense had earned a well-deserved reputation for making thrillers that captivated viewers and lit up box offices. But, despite his impressive track record, some began raising questions about the filmmaker and his work. He had made so many movies like his most recent release that some were wondering whether his creativity had peaked. Some also suggested that his recent foray into television with his enormously popular series Alfred Hitchcock Presents had “cheapened” his image as an artist. So was the auteur truly a man at the pinnacle of his career? Or was he perched atop the crest of a wave that was about to come crashing down?

As for the director himself, in spite of his advancing age and faltering health, he believed he still had some untapped creativity in the tank. Nevertheless, he also recognized that perhaps his work was becoming a little stale, that maybe he had taken his singular style of suspense as far as it could go and needed to plumb new territory if he really wanted to push the creative envelope. To address this, he believed he needed to tackle material that was uniquely fresh and unreservedly audacious. But he also knew he’d meet with studio resistance in taking on such a risky project, mainly because any of his prior films that attempted to chart new ground, such as “Vertigo” (1958), generally (and inexplicably) bombed at the box office.

No matter how daunting these circumstances were, though, Hitchcock refused to be deterred, pushing ahead to find the right story that would meet his criteria, and he found it in, of all places, a chilling, grisly novel titled Psycho, by Robert Bloch. The book, loosely based on true events, chronicled the gruesome exploits of serial killer Norman Bates, and it told a horrific tale, one that Hitchcock knew would make a terrific picture.

Needless to say, given the movie’s grotesque subject matter (which represented new territory in the film industry at the time), production on “Psycho” (1960) met with resistance at every turn. Members of the media were aghast at the picture’s premise when Hitchcock introduced it at a press conference. Paramount Pictures President Barney Balaban (Richard Portnow) refused to bankroll it. Production Code Administrator Geoffrey Shurlock (Kurtwood Smith), who oversaw film industry censorship issues, threatened to withhold approval of the movie’s release certificate. Even Hitchcock’s wife and fiercely loyal collaborator, Alma Reville (Helen Mirren), was uncharacteristically hesitant about supporting the project, viewing it as a sensationalist, sadistic exercise that was beneath his considerable talent, sarcastically suggesting that maybe he should produce it as a musical starring Doris Day.

Hitchcock disagreed, criticisms and impediments notwithstanding, going so far as to mortgage his home to raise money and fund the movie as an independent production, with the studio serving only as distributor. He cast actress Janet Leigh (Scarlett Johansson) as his leading lady and relative newcomer Anthony Perkins (James D’Arcy) as the troubled protagonist, along with Hollywood staple Vera Miles (Jessica Biel) in a supporting role. “Psycho” was a huge gamble financially, artistically and professionally, but, in the end, it was one that paid off handsomely, becoming the most successful film of Hitchcock’s career.

So much for the detractors.

Regardless of what one might think about the subject matter of Hitchcock’s films, one can’t deny that he truly was a master of his genre. “Psycho” in particular, as gruesome as it was, broke cinematic ground in many ways, featuring unprecedented depictions of violent and suggestive content never before seen on screen. It was even the first picture to show the highly controversial image of a flushing toilet (horrors!). But, for better or worse, “Psycho” went on to attain considerable acclaim, including the distinction of being named the top celluloid thriller of all time according to the American Film Institute.

Hitchcock’s tremendous accomplishments, both in “Psycho” and in virtually all of his films, stemmed from his conscious creation proficiency. He believed so passionately in his work that the elements of his creations came together with seemingly effortless precision, just as any materialization birthed by an ardent conscious creator operating from a position of unfettered intent would inevitably manifest. And, because Hitchcock intuitively understood this, success naturally followed. Like a maestro conducting a symphony, he took control of the creative process and milked it for all it was worth, even down to his expert, perfectly timed manipulation of audience responses (wait until you see the sequence portraying Hitchcock’s reaction to viewers seeing the film for the first time!).

Even when faced with challenges to overcome, Hitchcock was masterful at being able to attract workable solutions. For instance, when he searched for someone to adapt Bloch’s novel for the screen, he “fortuitously” stumbled upon Joseph Stefano (Ralph Macchio), an aspiring script writer with his own share of self-avowed neuroses (and who better to flesh out a character like Norman Bates?). Similarly, in casting Anthony Perkins as the tortured protagonist, Hitchcock found the perfect actor for the part, especially when Perkins confided to the director that there were elements of his character that he could relate to personally. Such synchronicities, as macabre as they might be, are nevertheless indicative of a conscious creator operating in top form.

Of course, the director’s success as a conscious creator arose in large part from him being true to himself and not really caring what others thought about it, a quality that typified both his personal and professional lives. For example, he made little attempt to conceal his passions for excess and the unconventional, be it in his work, his love of food and drink, and his infatuation with blonde femme fatales. He embraced such obsessions, attitudes and behaviors, no matter how crass, self-serving or unusual they may have been perceived, even by his beloved Alma.

Hitchcock also didn’t let fear stand in his way. He had no reservation examining subjects that no one else would touch. He believed, as conscious creation maintains, that all probabilities are capable of being expressed, including those that arise from “the dark side,” a quality that he sincerely believed we each possess. Some of us would probably like to deny our shadow’s existence, but Hitchcock wasn’t afraid to acknowledge it, or even to explore it, as he did unhesitatingly (albeit “benignly”) through his films. In that regard, we should all be so forthright.

When in need of insight, Hitchcock readily drew upon the resources available to him, too, again no matter how unconventional they were. For example, when he sought inspiration during the filming of “Psycho,” he would try to envision what the killer would do, occasionally even appearing to tap into the consciousness of Ed Gein (Michael Wincott), the real-life individual on whom Norman’s character was based. The “advice” of this ghoulish muse would invariably help to show him the way. Likewise, when shooting the infamous shower scene in “Psycho,” Hitchcock was not getting the reaction he wanted out of his leading lady; he believed Janet Leigh was coming across too timidly for the imminent terror her character was facing, and the actress’s repeated failure to live up to his expectations angered him. He became so frustrated at this that he assumed the reins of Bates’s character and lunged ferociously at Leigh, his rage fueled by the anger he was harboring toward those who he thought were sabotaging his project, such as Balaban and Shurlock. Needless to say, that impulsive gesture got him the reaction he was looking for.

But what was perhaps most significant about Hitchcock’s work as a filmmaker (and his proficiency as a conscious creator) was his enduring desire to innovate. As noted above, he believed he still had untapped creativity within him at a time when some were suggesting that he should hang things up. He proved through his choice of “Psycho” as a project, his inventiveness in filming the picture, his inspired marketing campaign for the movie and even his novel means of financing it (atypical at the time) that he was willing to try the untried, pushing the envelope not only for himself but also for his art form and his industry. His eagerness to boldly take things in such new directions is one of the hallmarks of conscious creation, aptly reflecting the oft-cited observation of author/philosopher Jane Roberts that “we’re all in a constant state of becoming.”

“Hitchcock” is one of the most enjoyable movies I’ve seen in a long time, fun in virtually every respect. It’s a terrifically campy romp through the Hollywood of 1960, a well-made period piece reminiscent of movies like “My Week with Marilyn” (2011), meticulous in all of its historical details. It also features ample laughs and superb performances by Hopkins (a strong awards contender), Mirren and a fine supporting cast. The film’s portrayal of Hitchcock’s private life (particularly the strain in his relationship with Alma) doesn’t work quite as well as its depiction of his professional and creative sides, but it doesn’t take away from the picture’s overall quality either.

Alfred Hitchcock truly was an original, a one-of-a-kind whose likes and works may be imitated but never duplicated (as the forgettable 1998 remake of “Psycho” clearly illustrates). His contributions to cinema, no matter how one sees them, were undeniably innovative, opening doors that were previously closed, even unenvisioned, thereby paving the way for the many successors who would follow. In conscious creation terms, this is known as living out one’s value fulfillment, and live it out he did, masterfully and with distinction. “Hitchcock” is a fitting tribute to the man and his art and to what we can all achieve when we allow ourselves to be the master creators we were all born to be. 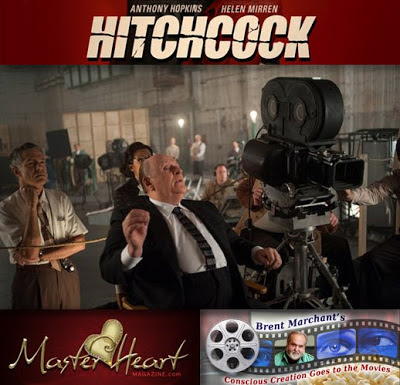