‘The Impossible’ reveals how beliefs beat the odds

Under trying conditions, reconciling oneself to seemingly obvious inevitabilities might look like the only option available. But is it really? What if another choice were possible? And what would it take to materialize it? Those of just some of the questions addressed in the affecting new drama, “The Impossible.”

It’s December 2004, and the Bennett family is anxiously looking forward to a Christmas vacation in Thailand. Parents Henry (Ewan McGregor) and Maria (Naomi Watts) and their three children, Lucas (Tom Holland), Thomas (Samuel Joslin) and Simon (Oaklee Pendergast), are excited about their upcoming stay at a luxurious beach resort in Khao Lak. They arrive on Christmas Eve and enjoy a festive time together, a suitable prelude to a merry yuletide celebration the next morning. But, on December 26, things change drastically, in ways no one ever could have predicted.

While swimming and sunning at the resort’s pool, the Bennetts begin hearing, and then feeling, a deafening rumble, one that causes them and all of the other foreign tourists to stop dead in their tracks. Moments later, the source of that thunderous roar becomes apparent – an enormous and horrific tsunami crashing over the nearby shoreline, inundating the resort and washing away everything – and everyone – in its path.

In the wake of the huge wave, Maria and Lucas get swept away but miraculously manage to find one another. They take shelter in the branches of a tall tree along with Daniel (Johan Sundberg), a terrified young boy separated from his family. With debris swirling about beneath them, they await help in the relative safety of the sturdy boughs. And help truly is needed given Maria’s condition; as a physician, she’s well aware of the severity of her injuries and the consequences of what will happen to her without treatment.

While Maria and Lucas struggle to save themselves, Henry, Thomas and Simon somehow manage to survive the inundation by taking refuge at what’s left of the resort. They fretfully await word of what might have happened to their loved ones, but, with such widespread devastation and virtually nonexistent communication, they’re essentially helpless to do anything but wait. The trio later becomes separated intentionally when Henry sends his sons to an evacuation camp, opting to stay behind and search for his wife and son, a painful decision for the young father, compounding the flood of anguish that’s already washed over him.

Meanwhile, Maria’s and Lucas’s prayers for a rescue are answered when two local residents (La-Orng Thongruang, Tor Klathaley) shepherd them to the safety of a nearby hospital. Maria’s condition is grave, but she insists that Lucas go help others while she awaits treatment. He leaves her bedside reluctantly, but he’s rewarded for his Samaritan efforts by helping to reunite a Swedish tourist (Douglas Johansson) and his injured son (Emilio Riccardi). Upon returning to his mother’s hospital bed, however, he finds her gone with no word of her whereabouts or condition. Yet another separation for the family thus makes an already trying time even more arduous.

Will the Bennetts reunite? Or will they be forever separated? And what of Maria’s condition? Will she survive? These are the seemingly insurmountable challenges posed to an unsuspecting family that started out on its trip merely hoping for a pleasant holiday vacation. Some might even say that the odds of such a reunion are “impossible.” But then, who’s to say the odds are always right?

As conscious creators are well aware, we each draw to ourselves a reality that’s in line with our beliefs and intents. But why, one might ask, would anyone draw to himself events as horrendous as this?

In conscious creation terms, incidents that occur on such a grand scale as this are called “mass events,” happenings that are co-created en masse. While the event may be viewed as a single occurrence, it’s actually made up of countless individual events that all unfold under the same umbrella. The beliefs underlying such individual events generally have to do with whatever particular lessons their creators need to learn, and, in the case of this film’s protagonists, there are numerous teachings that each of them is able to experience as a result of this tragedy.

For instance, while on the plane on their way to Thailand, virtually all of the Bennett family members express trepidation about various fears that each of them is dealing with. In all of these instances, however, the fears they’re wrestling with pale in comparison to those they will come to face during the course of their respective upcoming ordeals. The wave, as unquestionably devastating as it was physically and emotionally, nevertheless provides an opportunity for addressing lessons related to fear. One would hope that resorting to means as drastic as this wouldn’t be necessary for learning such lessons, but sometimes we must attract such extreme circumstances to us in order to do so, especially if the issues in question have gone unaddressed for an unduly long time.

Likewise, the individual tragedies that transpire in the course of this mass event also provide prime learning opportunities with respect to compassion, a lesson of particular importance for Lucas. While Lucas may be the least fearful of the family members, it’s due largely to his strong survival instinct, a quality that doesn’t always make allowances for helping others. The tsunami changes that, however. For instance, in the midst of the turmoil of trying to help his injured mother survive the wave, Maria tells Lucas that they must try to help Daniel, even if it’s the last thing they do. Lucas is initially reluctant, but Maria’s insistence compels him to aid the lost young boy, helping Lucas to rewrite his beliefs regarding altruism and ultimately providing a rewarding experience for all involved.

The act of rewriting one’s beliefs can pay benefits in “unexpected” ways, too. For example, by saving Daniel, Lucas and Maria are themselves then saved by the local residents who rescue them from the tree. They get back what they put out, the outside world thus mirroring back to them tangibly what they intangibly believe on the inside. Their intentions are also thus rewarded by their divine conscious creation collaborator, their efforts recognized in a way not unlike that depicted in the heartwarming film “Pay It Forward” (2000). Payback, it seems, can indeed be a blessing.

Coming to understand that this is how the Universe operates helps to deepen our awareness of several other significant conscious creation concepts. First, it strengthens our belief in the notion that everything is inherently connected. It’s truly amazing to see how one mass event can include all of the links integral to the manifestation of so many diverse individual scenarios. Even seemingly “unrelated” influences carry intrinsic connections. If you doubt that, consider where the earthquake occurred that caused the tsunami; who would have thought that an event transpiring hundreds of miles away could wreak havoc in such a distant locale? But the connectedness of the Universe binds all things, no matter how seemingly remote or disparate, which is why we should be cognizant of this notion in the beliefs we form and the existence we seek to create. The Bennetts come to see this for themselves, too, and in more ways than they ever could have imagined.

But, perhaps even more significantly, this film makes the case for having faith. No matter how utterly improbable things may seem, truly “miraculous” events can occur, even in the face of the unlikeliest of odds, provided that one believes they’re possible. Even when things are at their darkest, the Bennetts never lose hope in finding one another. By holding on to that belief and paying attention to the synchronicities that steer them in the right direction, a family separated by tragedy has an opportunity to come together once again, emerging from the ordeal even stronger than ever.

Given the nature of a picture like this, it’s not too difficult to predict the outcome, even from the very beginning. Thus the trick in making a story like this compelling is the means by which the filmmaker gets the audience to the conclusion. But, because of the movie’s inspiring narrative, as well as its comparably uplifting trailer, I must admit to having had my reservations going in. I was concerned that it might easily be sappy and overly sentimental, riddled with clichés and manipulative plot devices. I couldn’t have been more wrong.

“The Impossible” is a truly heartfelt drama that earns the emotional reactions it evokes. In large part that’s due to the fact that the filmmakers have not sugarcoated their depiction of the tsunami. While the picture never descends to the level of being gratuitous, it nevertheless does not hesitate to show the tragedy and its effects in a frank, candid manner. When viewers see what the characters are up against, the responses induced are indeed genuine. This is due in part to the incredible re-creation of events, as well as the stellar performances of McGregor and Watts, who deservedly has earned best actress nominations in the annual Golden Globe, Screen Actors Guild and Critics Choice award competitions, as well as newcomer Holland, who received a Critics Choice Award nomination as best young actor.

Adversity can be a great teacher in many ways, as this film clearly shows. However, perhaps the greatest lesson it can teach us is that all need not be lost, even in the face of seemingly insurmountable circumstances. Indeed, “the impossible” need only be so if we allow it to be, and, when faced with such an outcome, the alternative might well seem preferable – as long as we believe it so. 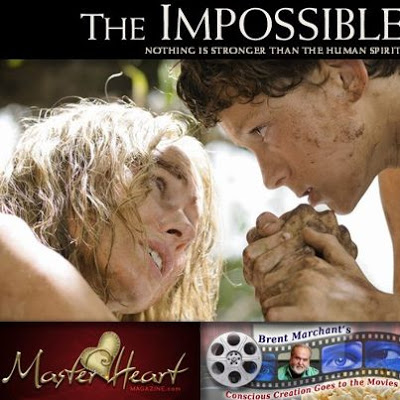