‘State of Illusion’ reveals the reality of reality

We all know how reality works, right? Or do we? Many of us like to think of our existence as an easily definable, quantifiable experience governed by readily identified laws that apply across the board. But is it really that simple, or is there something more subjective at work, especially when discrepancies make their presence felt? Those are just some of the considerations addressed in the enlightening documentary “People v. The State of Illusion,” now available on DVD.

Aaron Rogers (no relation to the Green Bay Packers quarterback) (J.B. Tuttle) is having a difficult time in life. Separated from his wife and potentially facing a layoff from his job, he struggles to get by. But that’s all before things go downhill.

One evening, after attending a school play featuring his daughter, Hope (Melanie Lindahl), Aaron runs a red light while driving her home, causing a tragic car accident in which the driver of the other vehicle, a mother of two young children, is killed. But, if that weren’t bad enough, he’s also found to be legally drunk. Having attended happy hour before meeting Hope, he had enough alcohol in his system at the time of the accident to be charged with DUI – as well as manslaughter.

Not long thereafter, Aaron is tried, found guilty and sentenced to six years in prison. With his life falling apart, he sees no future for himself. He views his existence as a living hell, one that was bad on the outside before the accident but that has now been made that much worse on the inside. Little did he know, however, that this self-assessment of his life would provide him with a fitting metaphor for capturing the essence of his existence – one that would also be the key in helping him to turn things around.

While in jail, Aaron crosses paths with two people who will play significant roles in helping him sort out his life, a prison guard (Kevin McDonald) and a janitor (Michael McCormick). Through his conversations with them, Aaron comes to realize that his circumstances, both before and after incarceration, are clearly the product of his own creation, the physical manifestation of his prevailing beliefs and worldview. And, as a result of that newfound awareness, he subsequently comes to recognize that changing his fate going forward is also just as much a product of his beliefs and worldview – provided that he allows change to occur.

The story line of this fictional narrative thus takes viewers through the process of awakening and self-discovery that Aaron experiences. Each of the realizations that he experiences as part of that process are defined and commented upon by a panel of experts in the fields of medicine, physiology, psychology and metaphysics, explaining the intrinsic connections between these various disciplines (and how those connections apply to each of us) and illustrating how Aaron’s circumstances are, in fact, the result of his own making, how such connections lead to the thoughts that become the things that make up his life.

In reaching these conclusions, the experts essentially take the notion of conscious creation (or law of attraction) as a given, a fundamental starting point for understanding how reality works. They then walk viewers through the steps of how one’s tangible existence arises from one’s intangible beliefs. However, the experts hasten to add that the beliefs we draw upon to create the reality we experience represent only an infinitesimal part of the total range of belief options available to us. We could just as easily choose a different set of beliefs from the ones we adhere to, but, until we do, the reality we manifest will persist in materializing an existence in line with whatever beliefs prevail.

In that sense, then, the reality we experience is essentially an “illusion,” one of many possibilities that we’re each capable of experiencing but that simultaneously does not serve as an intrinsically objective universal truth applicable to everyone. Whatever we experience comes down to whatever we choose to focus our attention on, a concept repeatedly reinforced in the writings of author and conscious creation advocate Jane Roberts and her noncorporeal channeled entity, Seth. If what we focus on suits us, that’s great; if that’s not the case, however, then it’s time for a change and taking the steps to make that possible.

Learning how to liberate ourselves from our own self-imposed imprisonment – a fitting notion given Aaron’s example – is the key to creating a life of greater fulfillment. Of course, becoming aware of the fact that we have that option at our disposal in the first place is crucial if we ever hope to escape the confinement that we tend to view as fixed and unalterable. In doing so, we must also be willing to accept responsibility for what we manifest, because failure in this regard amounts to nothing more than a fundamental abrogation of our role in the process of creating the reality we experience. However, by witnessing Aaron’s odyssey, combined with the insights of the expert commentators, we’re provided with clues as to how we can do the same for ourselves as the protagonist does for himself in his life.

Those familiar with the enormously popular documentaries “What the #$*! Do We (K)now!?” (2004) (commonly known as “What the Bleep”) and “The Secret” (2006) will undoubtedly recognize the parallels between those films and this production in terms of approach, format and content. However, as commendable as both of those films are, I believe that “People v. The State of Illusion” represents a significant step up from those pictures, providing viewers with clearly defined, highly practical and easily understood information on the reality of reality. Its concise, no-nonsense approach makes its arguments impeccably clear and to the point, and even those who are new to these ideas are likely to come away from this film with an indisputable understanding of the concepts it covers.

The presentation of the picture’s central themes in the context of a “trial” is an inspired approach, one that undoubtedly came naturally to screenwriter and narrator Austin Vickers, himself a former trial lawyer. While the narrative doesn’t follow a trial format per se, the protagonist’s actions are clearly on trial in the view of the “people” (i.e., the audience), his contentions countered by the prosecutorial arguments of the narrator and the expert witnesses. And, in the end, after hearing the cases made by each side, we’re left to render a verdict on the process outlined in the film, not only as it applies to Aaron but also to ourselves.

Birthing an existence that suits us can be an exciting yet tricky process, especially if we intentionally don blinders that keep us from seeing all of the possibilities open to us. But, if we’re willing to consider the range of options available and pursue the desired outcomes, we can reap tremendous rewards for ourselves. And that’s no illusion. 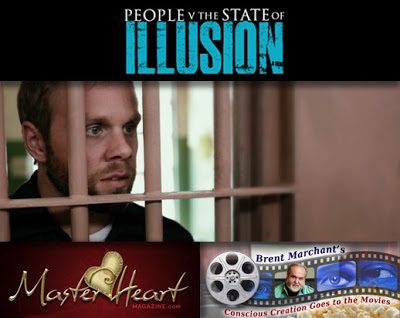