‘Les Misérables’ envisions hope for a world of our dreams

Daring to dream a world better than the one that we have takes foresight and vision. But, above all, it also takes courage, the fortitude to picture an existence that breaks the chains of limitation and embodies the notion that things don’t have to be as they are. Such is the message inherent in the film adaptation of the epic musical drama, “Les Misérables.”

Based on the classic Victor Hugo novel, “Les Misérables” tells the story of ex-convict Jean Valjean (Hugh Jackman) and his struggle to build a new life for himself in post-revolutionary France, a time when class inequality once again threatens to sweep across the land. After spending 19 years in prison for stealing a loaf of bread, Valjean is released by Inspector Javert (Russell Crowe), the officer responsible for his incarceration, who vows to keep close tabs on the parolee. But, if Javert’s threat weren’t enough, once Valjean is free, he finds that no one wants anything to do with him. As a marked man, he’s denied work and lodging and forced to sleep in the streets.

But, just when all seems lost, the Bishop of Digne (Colm Wilkinson) agrees to take in Valjean, feeding and sheltering him. In turn, Valjean repays his host by stealing the abbey’s silver, an act that leads to his capture by the local authorities. When the police ask the Bishop about the theft, however, he denies that Valjean stole the items in question, a gesture of compassion that astonishes the would-be thief. The Bishop then explains to Valjean that, since he has been the recipient of God’s mercy, he must go forth and build a new life for himself, one based on the same principles of benevolence and service to others that have been so generously bestowed upon him. He embraces the Bishop’s advice, vowing to pursue a virtuous, liberated life, and, to demonstrate his commitment to this new path, before leaving the abbey, he tears up his parole papers.

Valjean remains true to his word, spending the next eight years building a new life for himself as a business owner and as the mayor of Montreuil. He lives under an assumed name, an identity he desperately attempts to keep secret from the newly assigned police inspector, his old nemesis, Javert. Despite this ever-present threat to his freedom, Valjean nevertheless has the power and authority to help others, such as a lovely young femme fatale, Fantine (Anne Hathaway), who was wrongly dismissed from her job at Valjean’s factory by an unscrupulous foreman (Michael Jibson). Because of her financial hardships, such as supporting her young daughter, Cosette (Isabelle Allen), and her child’s opportunistic caretakers, innkeepers Monsieur and Madame Thénardier (Sacha Baron Cohen, Helena Bonham Carter), Fantine is forced into a life of prostitution and personal degradation. When Valjean learns of what happened to Fantine, he vows to take care of her and her daughter, a prospect made all the more difficult when Javert learns of his true identity.

To save himself and Cosette, Valjean must once again go on the run, and he successfully manages to elude his would-be captor for nine years. But, while living in Paris on the eve of the French capital’s 1832 Uprising, his wits are tested once again. In addition to hiding himself, Valjean seeks to protect Cosette, now a young woman (Amanda Seyfried), from the perils of the looming revolt, including the advances of a handsome young revolutionary, Marius Pontmercy (Eddie Redmayne). It’s a challenge for Valjean, especially when his efforts embroil him in the insurrection and bring him into contact with an undercover operative attempting to infiltrate the resistance movement, his old foe, Javert.

Will Valjean be able to save his beloved Cosette without alienating her? Will he be unwittingly caught up in a revolt whose intents are noble but whose chances of success are slim? And what of his old adversary, Javert – will he finally get his man? These are just some of the questions that loom as Paris – and Valjean’s life – are about to be enveloped in chaos.

Given the lives of the story’s principal characters, at first glance, one might be tempted to think that its title, “Les Misérables” (loosely translated as “The Miserable Ones,” “The Poor Ones” or “The Victims”), is most appropriate. Yet there’s also a certain irony associated with it since the story also deals with the characters’ attempts at rising above their circumstances, idealists who dare to dream that a better, freer, more equitable way of life is indeed possible. It depicts the power of the human spirit, as well as the power of belief, to create a better existence for ourselves and to enable us to grow and mature as individuals.

Such growth, however, invariably comes with its own set of challenges, as all of the story’s principals come to discover for themselves. In the course of taking on those tests, some will succeed; others will valiantly make the attempt, even if their efforts ultimately “fail”; and still others will be overwhelmed at the prospects of what such liberation affords, unable to handle what potential and prospects it carries. Along the way, there will also be influences that keep the protagonists committed to their tasks, such as Javert’s ongoing pursuit of Valjean, his efforts serving as a symbol of our hero’s “conscience” and his pledge to remain true to his goals – and to his true self.

The payoff for Valjean (and anyone similarly situated) is an escape from one’s limitations, those self-imposed restrictions that come to characterize one’s self-created imprisonment (in Valjean’s case, an outcome that materializes quite literally, at least initially). Learning to rise above such restraints is one of the aims of the conscious creation process, and the characters in this epic saga depict that notion fittingly. The level of success any one of them attains, however, will ultimately depend on what beliefs they hold in manifesting the reality they experience. Their examples serve as effective illustrations for us as we attempt to do the same in our own lives.

Perhaps the most significant realization to come out of such efforts is that we’re all inherently capable of redemption, no matter how indelibly branded we may feel we’ve become as a result of our actions. Escape routes are always open to us, provided that we allow ourselves to believe in them and that we’re capable of spotting them when they arise. Such synchronicities can guide us out of the darkness and into the brilliance of enlightenment, as Valjean discovers for himself, for instance, in the incident at the abbey. Events like that show us new ways for living our lives, providing us with examples for how we can approach others and our day-to-day existence, enabling us to reshape our destinies in this thing we call life.

As much as I try to keep an open mind about cinema, I’ll be the first to admit that I’m typically not a fan of movie musicals (as I wrote in the introduction to my book, Get the Picture: Conscious Creation Goes to the Movies, “most make me wish I’d been born heterosexual”). However, with that said, I must also confess that “Les Misérables” absolutely blew me away, a personal reaction that I was definitely not expecting.

The sheer scale of this production is awe-inspiring, so accolades are clearly in order for director Tom Hooper, if for no other reason than just being able to hold everything together. However, Hooper does more than that here; he has unquestionably marshaled the resources necessary for making a modern epic, one that both entertains and inspires on many levels. The production design and production values are top shelf across the board, from costume design to set design to cinematography and sound quality. But, if that weren’t enough, the film has assembled a remarkable cast, led by the outstanding performances of Jackman, Bonham Carter, Cohen and, above all, Hathaway, whose remarkable vocalizations are a true revelation. If the film has any shortcomings it would be a slight tendency to drag at times in the second half, but that’s more than made up for by everything else it has going for it.

The power to confine – and to liberate – ourselves lies within each of us. What we do with that power is also up to each of us. But recognizing that we have the ability in the first place is a significant milestone along the path to discovering the true nature of our true selves. “Les Misérables” shows us, with heartfelt emotion and remarkable clarity, how we can achieve that for ourselves – and our world. 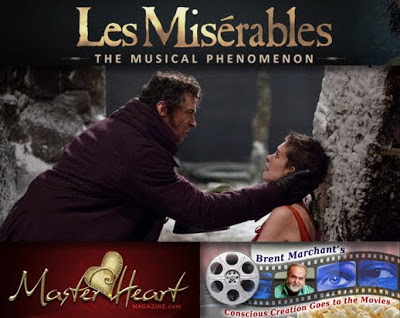