Skip to content
Home/Archives/‘Amour’ illuminates the power of love

‘Amour’ illuminates the power of love

Love is one of those sublime intangibles that artists of all callings, from Shakespeare to the Beatles, have sought to define, revere and embrace through their creations. Yet it encompasses such a vast array of embodiments that it’s difficult to encapsulate, or even grasp, all that it entails and makes possible. Nevertheless, the daunting nature of that task has not deterred those who would pay proper homage to the subject, as is amply evidenced in the latest offering from director Michael Haneke, “Amour” (“Love”).

Former music teachers Georges and Anne Laurent (Jean-Louis Trintignant, Emmanuelle Riva) enjoy a comfortable retirement. The middle class octogenarian couple lives a rich, rewarding life in Paris filled with evenings at the arts, visits from Eva, their daughter (Isabelle Huppert), and Alexandre, a now-famous former student (Alexandre Tharaud), and, above all, the loving company of one another. Indeed, despite the passage of many years, it’s obvious that Georges and Anne are still very much in love with one another. Which is why it’s so utterly heartbreaking when Anne’s health takes a turn for the worse. She suffers a series of strokes, and each episode leads to progressively greater debilitation – and steadily greater demands on Georges’ ability to care for her.

With Anne’s continual descent into incapacitation, the couple is forced to adapt to their new circumstances. While they struggle to preserve things as they always have been, they must increasingly face the reality of a future of things never being the same ever again. Perhaps the only constant in their lives is the love they share for one another, a bond that’s persistently challenged as they go forward, its strength and resilience repeatedly tested in the wake of ever-changing circumstances. But is that love enough to see them through? Or will a breaking point be reached? And, if so, what then? Such are the hard choices the couple must address.

As conscious creation practitioners are well aware, there’s tremendous power in our beliefs to shape the reality we experience. This is especially true when it comes to beliefs related to love. The power associated with beliefs tied to that emotion is so formidable that it’s sometimes difficult to fathom, even by those making use of it in the course of everyday living. But what wonders it can work! For instance, the power to create an intimate, committed relationship spanning decades, such as that enjoyed by Georges and Anne, is just one such example of what it can do. The power that it provides each of them to successfully maintain their bond for so long, and especially in the face of ever-growing challenges over time, is truly awe-inspiring, to say the least.

But love’s ability to nurture and uphold a partnership over the long term represents only a portion of its capabilities. It’s a power that enables its adherents to cope with our beliefs related to other creations, such as life and death, and their associated emotions, such as letting go and acceptance, not to mention the natural frustration that frequently accompanies all this. While love may not be a panacea for such circumstances, it can at least provide a cushioning buffer to ameliorate their impact, making them more manageable to deal with. Indeed, were it not for the belief in love that Georges and Anne have for one another, their journey together would be considerably more difficult (if that’s even possible to imagine).

Beliefs also play a significant role in this film in terms of defining the world that Georges and Anne experience. As time goes by and circumstances begin to close in on them, their world becomes progressively – and noticeably – “smaller.” Limitation significantly begins to define their existence. Moreover, “outside” influences, including such seemingly important factors as the role of family and friends, play an increasingly irrelevant part in the protagonists’ daily lives. As Georges and Anne approach the end of their time together, they use their beliefs to manifest a reality that centers almost exclusively on just the two of them. They spend virtually all of their time only with one another and only within the confines of their apartment. It’s a feeling that audiences might find uncomfortably claustrophobic (despite its cinematic effectiveness), but it’s also a view that Georges and Anne are unlikely to share; they’re simply creating an existence that suits their needs and wants at the time, one that’s designed to get as much out of the devotion they have for one another with whatever time they have left. Some might take issue with such choices, but, when one examines what’s driving them, it’s easy to see the characters’ motivation – the love that they share – despite the prevailing conditions.

Director Michael Haneke has produced an excellent picture here, even if it’s one that’s painful to watch at times. Riva and Trintignant both turn in superb performances, evoking genuine, heartfelt (some would say heartbreaking) emotions throughout, so keep those handkerchiefs handy. And please do keep an open mind to what this film is saying; it’s not merely a heart-tugging tearjerker but a thoughtful meditation on the power and beauty of the emotion that comprises the movie’s title. I recommend it highly.

The power to love (and to be loved) has to be one of the greatest conceptions that we, as conscious creators, could have come up with in our exploration of reality creation. When we see what it makes possible, even in the face of whatever adversity we may simultaneously co-create in conjunction with it, we can draw inspiration from this potent force to help see us through the difficulties that come our way. “Amour” sheds light on this notion, and it does so brilliantly, allowing us to see how each of us can shine – even in the shadow of looming darkness.

Author’s Note: Who will come up the winners at this year’s Oscars? Check out my predictions for the major award categories in my recently posted blog on the subject, What To Expect Out of This Year’s Oscars, available by clicking here. 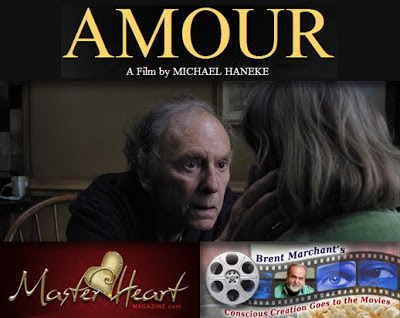