Skip to content
Home/Archives/‘Compliance’ reveals the danger of deference

‘Compliance’ reveals the danger of deference

Think you know how you’ll react when the reputations and well-being of others are threatened by the unproven accusations of those in positions of power? Will fairness and justice prevail? Or will self-serving interests and cowardice take precedence? Those are just a few of the thorny questions examined in the gripping independent film, “Compliance,” now available on DVD.

With the weekend approaching, it promises to be yet another hectic Friday night at the South End branch of ChickWich, a fictitious fast food restaurant located in an unnamed Ohio suburb. In addition to serving the typically large, demanding crowd, the short-staffed crew must cope with rationing certain food items (due to a freezer issue that resulted in spoilage) and preparing for a possible corporate quality control visit by a mystery shopper. The restaurant’s manager, Sandra (Ann Dowd), quietly struggles to keep everything together, shuffling staff to meet operating needs and frantically (but professionally) attempting to anticipate the challenges that are almost certain to arise. But those inflated crises pale in comparison to what she’ll have to face when she receives an unexpected call from the police.

Not long into her shift, Sandra’s told she’s wanted on the phone to speak with Officer Daniels (Pat Healy), a detective calling to investigate the alleged theft of money from a customer’s purse while waiting to be served by one of the restaurant’s counter cashiers, Becky (Dreama Walker). Sandra is initially surprised by the allegation, but Officer Daniels makes a case against the teenage suspect that sounds thoroughly convincing. He asks Sandra to sequester Becky for interrogation, an order that she follows dutifully, without hesitation. But what begins as simple questioning over the phone quickly spirals out of control, leading to an embarrassing, intimidating strip search and other acts of humiliation that cause discomfort for all involved, including, eventually, other employees and even outsiders. And, through it all, the officer is never present, issuing his commands completely over the phone – orders that are generally followed to the letter, without question. The detective’s legally dubious dictates grow progressively more demeaning, but the full scope of this exercise in degradation doesn’t become apparent until it’s discovered the call is a prank – and a sick, twisted one at that.

Given the nature of the film’s narrative, viewers might be tempted to dismiss it as patently preposterous. But is it? After all, the story was inspired by actual events. And, while the picture’s plot isn’t a verbatim recounting of any one particular incident, director Craig Zobel observes (in an interview included in the DVD’s Extra Features) that it is an amalgamation of events that transpired during the 70 such instances that have been reported in 30 states across the U.S., a statistic cited at the movie’s conclusion.

The big question that this film raises, of course, is “How can something like this happen?” Once again, according to director Zobel in his Extras interview, the picture takes a hard look at our responses to situations involving authority figures. Citing psychological studies conducted in the 1960s, Zobel notes that, when the majority of subjects were placed in circumstances involving representatives of officialdom, they would nearly always capitulate to the authority figures’ demands, no matter how questionable the directives and regardless of how they believed they would have responded to comparable hypothetical situations before the start of the experiments. “Compliance” lends credence to that finding, showing how it might – and indeed can – play out under conditions like those portrayed in the fictitious ChickWich outlet.

This, then, begs the question, “Why would someone respond like that if he or she knew better?” From a conscious creation standpoint, this is where the concept of beliefs, the cornerstone of reality materialization, comes into play.

For many of us, our beliefs about the world are shaped by our early life experiences, many of which are strongly influenced by our responses to various authority figures (parents, teachers, religious figures, health care providers, etc.). Such responses, in turn, come to form a “belief template” that provides the foundation for our worldview and its myriad applications. And one of the beliefs often found in that template is “Don’t question authority figures.” As a consequence, many of us tend to manifest an existence characterized by such attributes as obedience, conformity, deference and, as the movie’s title suggests, compliance.

As we grow older, however, our life experiences often prompt shifts in our beliefs and worldviews, not to mention the realities we conceive. Unfortunately, the incumbent beliefs, which have undoubtedly been in place for a long time, hold on steadfastly in our consciousness, even if they no longer serve us, creating significant disconnects when they come into conflict with the new beliefs attempting to usurp them. The power of the prevailing notions causes us to doubt the validity of the new beliefs, making us hesitant to act upon and implement them. And, when faced with such inherent contradictions, the newcomers are likely to be dismissed. Under circumstances like those found in the film, the original belief that nearly all of the characters abide by – “Obey authorities, no matter what” – will win out over any new conceptions that question that notion, leading to the unfortunate consequences that unfold on screen.

We’ve all likely experienced similar circumstances in various situations in our own lives. Think, for example, of how we typically react to being stopped by a traffic cop, or visiting the doctor, or passing through the security screening area at the airport. In some instances, following the prevailing beliefs described above may be entirely appropriate, while, in others, questioning the circumstances would be the wiser course. But which response is called for under which conditions?

This is where the value of intuition figures into the equation. That nebulous gut feeling we get plays an important role in shaping the beliefs that shape our reality. However, because our intuition tends to be less defined than the other component that factors into belief formation – our intellect – we often ignore it, sometimes out of hand, especially when opposed by potent existing, often-intractable beliefs. But engaging in such behavior can be perilous; our intuition, though sometimes vague, occupies a place in our consciousness for a reason – to provide us with the necessary heads-up in crucial situations, just when we need it most.

Sandra, Becky and their colleagues are tested on this idea repeatedly throughout the film, and it’s readily apparent that they would prefer to respond differently to their circumstances than they actually do. And, were it not for Officer Daniels’ domineering demeanor – even over the phone – they otherwise might have. But, given the alleged detective’s imposing presence, they reluctantly dismiss their untried intuitive feelings and default to the beliefs to which they’re most accustomed. That’s unfortunate, too, since putting forth a little effort to validate those intuitive feelings would have made it incredibly easy to refute Officer Daniels’ claims – and to avoid the regrettable fallout that arises from such failings.

Acting in this way can have huge consequences. It creates a sense of personal disempowerment and leads to an abrogation of personal responsibility. Both of these outcomes, in turn, contribute to an embracing of victim status, a condition that causes many of us to believe we have no choice in how our lives unfold. This limits the range of options that we believe we have open to us, allowing us to see only a fraction of the infinite probabilities that conscious creation makes possible. And the bottom line in all this is that we run the risk of stagnating as the masters of our destiny, never living up to our full potential for personal growth and development. Such is the danger inherent in undisputed deference.

“Compliance” is an excellent, underrated independent production that truly deserved wider recognition than it received in its largely ignored original release. Director Zobel’s highly credible cautionary tale impresses across the board, from its crisp writing to its innovative cinematography to its distinctive soundtrack. What’s more, it clearly depicts the risk associated with failing to follow our instincts, and it does so by creating a taut, almost claustrophobic sense of suspense throughout, the creepy kind that successfully manages to get under one’s skin. It’s the sort of film where viewers might not know exactly what’s going to happen next, but they can be certain that it’s definitely going to be worse than whatever preceded it.

In that regard, then, some viewers may find this picture difficult to watch. You may easily find yourself squirming in your seat. Or you may just as readily feel outraged and infuriated; should this reaction arise, however, just make sure you’re aware of who it is you’re outraged or infuriated at. Remember, as conscious creators, we each create our own reality through the beliefs we hold, no matter what they are, for better or worse.

The film’s performances are especially noteworthy. The superb ensemble cast of mostly newcomers creates a totally believable collection of characters, falling into their roles so effortlessly that it’s easy to view them with the familiarity we likely have of individuals we already know. Dowd, in particular, turns in a stellar portrayal, having won the National Board of Review’s award for best supporting actress, as well as nominations in the recent Golden Globe Award and upcoming Independent Spirit Award competitions. The picture was also named one of the NBR’s top 10 independent films of 2012.

In an age when many are feeling increasing pressure to toe the line in all of life’s endeavors, asserting one’s independence can be difficult, no matter how strong the impulse to do so. Retreating into our protective shells may seem like the path of least resistance, especially when our livelihoods are at stake. But going against the genuine inclinations of our gut can have tremendous implications, perhaps far worse than any personal setbacks we might suffer as a result of being true to ourselves. To that end, the cautions served up in “Compliance” provide a stern warning of what can result when we blindly follow the path of what we believe to be the best of intentions. 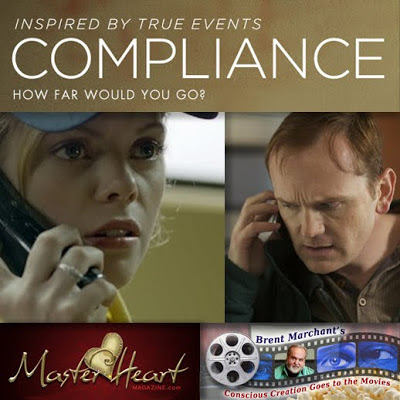