‘Side Effects’ underscores the perils of unintended consequences

Scottish poet Robert Burns is perhaps best known for having penned the lines, “The best laid schemes of mice and men oft go awry, and leave us nothing but grief and pain, for promised joy!” Such disappointments can indeed be devastating, but they can be that much worse for those who rely on insincere intentions and artificial means of assistance in seeking to achieve their goals, outcomes candidly depicted in the dramatic new thriller, “Side Effects.”

Emily Taylor (Rooney Mara) leads a challenging life. With her husband, Martin (Channing Tatum), incarcerated on insider trading charges, she struggles to cope with his absence and with making ends meet financially in the often-unforgiving world that is New York, conditions that frequently test her wits, as well as her sometimes-fragile psychological state. At times she lapses into depression, longing for the protected, genteel life of her upbringing in suburban Greenwich, Connecticut. And at other times she thinks about more drastic solutions – like bringing an end to things – even if she doesn’t recall considering such extreme measures after the fact. Martin’s eventual release from prison doesn’t seem to help matters much, either; Emily’s emotional breakdowns, bouts of withdrawal and listless behavior grow more common, as do her unwitting suicide attempts.

After one such incident, Emily’s hospitalized and placed under the care of psychiatrist Dr. Jonathan Banks (Jude Law), who agrees to take on her case to keep her from being institutionalized. In reviewing her clinical records, he discovers that she had been in therapy once before while in Greenwich, a patient of Dr. Victoria Siebert (Catherine Zeta-Jones). Dr. Banks consults his colleague about Emily, learning his new patient’s case history, particularly the antidepressants that Dr. Siebert prescribed for her, many of which seemed to offer little help. As an alternative, Dr. Siebert suggests that Dr. Banks try putting Emily on Ablixa, a new medication for which she’s serving as a consultant to the drug’s manufacturer. Dr. Banks’s curiosity is decidedly piqued, but the new wonder drug is not without its controversies, having been linked to some potentially serious side effects. Nevertheless, Dr. Banks decides to prescribe Ablixa for Emily, a decision that he’ll soon come to regret, especially when a tragedy befalls his patient that sets in motion a chain of events that threatens not only her well-being but also that of many others, himself included.

To say more at this point would reveal far too much about how the film ultimately plays out. Suffice it to say, however, that the pivotal incident in question has serious ramifications for Dr. Banks, his reputation, his practice and even his marriage, not to mention the lives and livelihoods of Emily, Martin and Dr. Siebert. Intrigue abounds as intrepid truth seekers look to reveal what really happened, an investigation that brings to light such dubious considerations as alleged professional misconduct, potential conflicts of interest, drug safety issues, pharmaceutical company profits, premeditated murder, offshore bank accounts and even a covert lesbian relationship. And, in the end, the “side effects” that spring forth in this scenario make those associated with the new drug itself seem trivial by comparison.

For many of us, when bad things happen, we look to retreat from them, hoping they’ll just go away or even actively attempting to deny them. Those efforts are sometimes abetted by mental health care professionals, too, when they over-prescribe medications that effectively squelch the discomfort (by switching off the brain’s sadness mechanism, as Dr. Banks puts it). But do these efforts do much to resolve these issues? Isn’t this just a case of kicking the problems down the road in hopes that they’ll be dealt with later? And, if so, will they indeed be handled at that future time?

Such denial is, in essence, little more than an effort to ignore the issues in question rather than take responsibility for dealing with their causes. From a conscious creation perspective, this essentially involves turning a blind eye to examining and analyzing the beliefs and intents that, for better or worse, prompt their manifestation in the reality we experience. Failing to look at why we create what we create, either out of ignorance or deliberate intention, keeps us locked in place, unable to move forward. And, when counselors primarily use drugs as the core course of “treatment” for their patients’ problems, they effectively abrogate their healing obligations and sanction continued patient disavowal of the issues at hand.

What’s worse, though, is that delays in taking action only tend to prolong the suffering, perhaps even giving rise to unanticipated consequences – or “side effects” – that make these situations even more unbearable. Whether such results come about from simple neglect or from conscious acts of denial (aided by mind-numbing chemical agents that only serve to exacerbate such efforts) is ultimately irrelevant, because the bottom line is fundamentally the same in both instances.

As this aptly titled film shows, the side effects of failing to be honest with ourselves about our beliefs and to actively take steps to address them can be far worse than anything we might anticipate, too. And this grows ever more onerous the more intentionally disingenuously we go about it. Engaging in such continued behavior potentially sets us up for disaster. Ultimately, the outcome of this can be much more devastating than just dealing with the issues in question in the first place, a lesson that some of the characters in this picture learn the hard way.

Getting to the heart of what’s going on with our beliefs is much easier to accomplish for those who understand how we formulate them and what faculties we employ in doing so. In conscious creation terms, this specifically involves learning how we use our intellect and our intuition to birth the beliefs we use in creating our reality. Someone like Dr. Banks is especially skilled at this, not only in analyzing his own motivations but also those of others (which is what essentially makes him such an effective therapist). We’d be wise to follow his lead in coming to terms with understanding who we are, what we create, how we do so and why we experience the existence we live through. By doing this, we’d be much more likely to honestly manifest what we desire, perhaps being able to avoid the potential problems associated with misdirected materializations (and the chemical crutches that can amplify them), not to mention all the unwanted side effects related to both.

From the film’s trailer and marketing campaign, “Side Effects” comes across like a movie that deals head-on with the issue of pharmaceuticals and the unexpected consequences that might arise with their use, a story that has been steadily receiving increased attention of late, especially in the alternative media. And, to be sure, there are some aspects of the film that address this controversy openly, but they’re definitely not as prevalent as one might be led to believe going in. In that sense, then, “Side Effects” isn’t exactly the picture one might expect it to be. Still, despite the movie’s limited direct treatment of this issue, its narrative nevertheless provides a fitting metaphor for this subject, as well as an excellent example of how creation efforts gone haywire can yield “unintended” results. On that score, the film drives home its point well, providing viewers with a potent cautionary tale of what can happen when, for whatever reason, we get sloppy in our manifestation efforts. This message is effectively punctuated by the fine performances of the principals, too, particularly Mara, Law and Zeta-Jones.

However, despite these strengths, “Side Effects” could use some judicious tweaking. It’s at times a tad slow-paced for a thriller, occasionally becoming a little too talky for its own good. The plot sometimes gets a little too convoluted as well, a problem not helped by its pacing issues. Had these drawbacks been shorn up a bit, they would have made for a much better picture. As it stands now, the film is certainly noteworthy, though, arguably, not as memorable as it otherwise might have been.

Years ago, the Rolling Stones cautioned us, “you can’t always get what you want, but sometimes, you just might find, you get what you need.” From a conscious creation standpoint, I’d reword that admonition slightly to read “you just might find, you get what you believe,” no matter what those beliefs entail. “Side Effects” capably captures the essence of that reworded sentiment, and it does so by giving us pause to think twice about what intentions we put out there. That’s some strong medicine, metaphysically speaking – but it’s certainly preferable than being left with a hard pill to swallow. 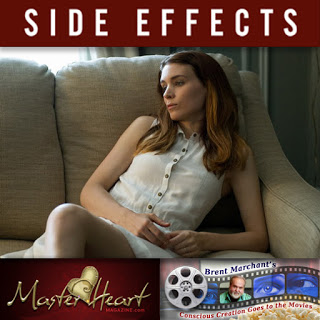