Feelings of detachment are, unfortunately, all too prevalent these days. So many people believe themselves to be so removed from one another that they often wonder whether or not they’ll ever be able to get those feelings back. Correcting such failings may require drastic measures, too, as becomes all too apparent in the compelling new drama, “Disconnect.”

The narrative of “Disconnect” weaves a number of story threads together, creating an intriguing interconnected tapestry:

* Shy, sensitive high school musician Ben Boyd (Jonah Bobo) feels isolated from his family and most of his classmates. His father, lawyer Rich Boyd (Jason Bateman), mother (Hope Davis) and sister (Haley Ramm) are preoccupied with their own lives and interests, paying little attention to him, and his peers see the enigmatic recluse as something of an inscrutable freak. To cope, Ben loses himself in his music, tuning out much of the world around him. So it comes as quite a surprise when he takes an active interest in a lonely young woman, Jessica Rhony, whom he befriends – and falls for – through a social network connection. The kindred spirits develop a bond, sharing intimate thoughts and confidences with one another. There’s just one hitch, though – there is no Jessica. Her profile is the fabrication of a pair of prankster classmates, Jason (Colin Ford) and Frye (Aviad Bernstein). The impish wags get a good laugh out of their geeky target’s online reactions and responses, but their scheme backfires when things take a shocking left turn. (So much for fun and games.)

* Cindy Hull (Paula Patton) and her husband Derek (Alexander Skarsgård) are sliding toward a breakup. Having tragically lost their young son, they’ve grown apart, rarely speaking to one another. Derek, a hardened military veteran, refuses to deal with his grief, losing himself in his work and in protracted online gambling sessions. Cindy, meanwhile, escapes her circumstances by frequenting the chat room of an online grief support network, communicating extensively – and quite intimately – with a fellow survivor who goes by the screen name “fearandloathing.” But, if this growing chasm of emotional separation weren’t enough, Cindy and Derek soon find themselves the victims of identity theft, their bank accounts having been emptied and their credit cards having been maxed out for all kinds of fraudulent purchases. They hire cyber crime investigator Mike Dixon (Frank Grillo), a tough-nosed former cop, to look into the matter, a painful process that winds up exposing the many secrets that Cindy and Derek have been keeping from one another. The investigation also identifies a suspected culprit (Michael Nyqvist), a middle-aged out-of-town dry cleaner who goes by the all-too-familiar online alias fearandloathing. Feeling violated and seeking justice, Derek decides to take matters into his own hands, but his decision carries its own share of unforeseen consequences, circumstances that no one involved is expecting – or adequately prepared to handle.

* Reporter Nina Dunham (Andrea Riseborough) has grown tired of doing endless puff pieces for her television station’s local news broadcasts. She wants to do work that’s more meaningful and substantive. And she gets her shot at that when her editor, Peter (Norbert Leo Butz), agrees to let her do a report about the life of a young internet sex worker named Kyle (Max Thieriot), who unabashedly flaunts his wares over web cams for cash. Kyle agrees to Nina’s proposal as long as she guarantees his anonymity, fearing repercussions from his boss, Harvey (Marc Jacobs), who runs an online network of live erotic web sites, some of which involve allegedly legitimate (but obviously underage) cyber models. Nina’s reporting is well-received, even capturing the attention of CNN. But, given the age of some of the parties involved in Harvey’s network, the broadcast also gets the attention of the FBI. Investigator Roberta Washington (Kasi Lemmons) wants to contact Nina’s sources, but, given the promise of anonymity she made to Kyle, Nina resists divulging what she knows. Faced with suspension from her job and possible criminal charges, Nina must decide whether to keep her word or to keep herself out of jail, a hard choice that has implications for everyone involved.

As the story progresses, the interconnecting threads of the various plot lines become apparent, revealing connections that are peppered with highly synchronistic twists. For example, Mike Dixon, Cindy and Derek’s internet investigator, turns out to be the father of Jason, one of the teens posing as Jessica in the mercilessly cruel online teasing of his emotionally vulnerable classmate. Likewise, when Nina’s employer needs legal advice in the wake of the pending FBI investigation, Peter calls on the station’s lawyer, Rich Boyd, for counsel. And, as events play out, characters once thought to be widely separated from one another come together for ironic encounters as the film approaches its dramatic climax.

Of course, that illusion of separation is what this film is ultimately out to dispel. As anyone versed in any number of metaphysical disciplines (including conscious creation) can attest, there is an intrinsic connectedness binding everything. The notion that any of us or any of the elements that make up our reality are somehow separate, distinct and apart from one another is the height of folly, a grand misconception of how the Universe operates. And, regrettably, it’s also the source of the isolation that so many of us are feeling these days.

Getting reacquainted with our sense of connection as a means to overcome our feelings of separation is at the heart of what “Disconnect” is all about, but it doesn’t take a direct route in reaching that destination. In fact, its path is deliberately convoluted, an approach that ultimately serves to heighten viewer awareness and appreciation of what’s missing, and the fulfillment that comes from getting it back, by intentionally focusing, at least initially, on its palpable absence. The picture accomplishes this by showcasing characters who, as the movie’s title implies, feel disconnected from one another. They turn to the internet to reach out to others, a tool that, at least in theory, has the potential to strengthen our connections to one another, ultimately bringing us closer together. But, as the protagonists discover for themselves, surfing the web can sometimes have exactly the opposite effect, creating even greater emotional distance and deeper isolation, leaving us feeling more disconnected than ever. Indeed, technology is no substitute for intimacy.

So why does this happen? By attempting to employ something outside of ourselves as a means for fixing something that inherently arises from within us, we not only fail to repair what’s broken, but we also reinforce the prevailing dissatisfaction. Trying to eliminate our isolation by making use of a technology that can sometimes promote it only exacerbates our circumstances. Now, this is not meant to demonize the internet, because comparable results will arise with any externalized materialization that we attempt to use to rectify an internal deficiency. As conscious creators know, to change our reality, we must change the beliefs that spawn it. So, in order to effectively rid ourselves of our feelings of isolation, we must look inward and eliminate the thoughts that give rise to them in the first place. We get what we concentrate upon, so if we’re focused on feelings of separation, that’s what will be reflected back to us in all we experience, even in the externalized tools we use to try to correct the problem.

In attaining what we want, however, we must often first experience (and then sometimes even endure) what we don’t want. In this case, the characters must create, and then tire of, their sense of isolation as a means to eradicate it and to open up space for something to replace it – like a renewed awareness of connectedness. Clearing that space can be an arduous undertaking, though, especially if the beliefs that perpetuate the prevailing conditions are particularly entrenched. Reaching that goal, then, may require drastic measures, including the introduction of beliefs and the ensuing manifestation of circumstances and events that dramatically upend the status quo, ripping out the roots of the metaphysical weeds that threaten to overgrow the garden of one’s happiness and contentment. Such experiences may be anything but pleasant; however, they also hold the promise for ushering in a renewed sense of peace, enjoyment and fulfillment.

Derek and Cindy’s relationship, for example, is so far gone that there’s precious little to save it if they continue down the path they’ve been on for so long. They obviously must significantly change their circumstances if they hope to hold on to their marriage. The revelation of hurtful secrets and the need to fight for their collective economic survival are volatile conditions, but they’re also incentives powerful enough to raise the question, “Is this relationship worth salvaging, or do we end it now?” The beliefs that created those events, and the beliefs that will arise to address the foregoing question, will determine how things ultimately play out between them.

Taking such radical steps to change one’s circumstances may seem unnecessary, but, then, sometimes there may be no other way to achieve that goal under such intractable conditions. In films like “Crash” (2005) and “Ordinary People” (1980), for instance, we see characters so desperate to feel anything that they’re even willing to experience negative emotions just to be able to restore their ability to feel at all. So it is also with the principals in “Disconnect,” who are so desperate to restore their sense of connection that they’re willing to endure anything to be able to reestablish their capacity for it. For their sake, we can only hope they succeed.

“Disconnect” is a real knock-out of a picture. Filmmaker Henry-Alex Rubin’s debut fictional feature is an impressive effort, excellent in every respect but especially in its writing, editing and direction. The picture’s deft fusion of live action and on-screen text graphics make for imaginative storytelling (given the subject matter), and its innovative use of sound and its engaging soundtrack provide added dimensions to the material. The film also features terrific performances across the board, especially Bateman (who shows surprising depth), Grillo, Riseborough and Patton, as well as the young performers (Thieriot, Ford, Bobo and Bernstein), who demonstrate an acting maturity beyond their years.

Some viewers and critics have labeled “Disconnect” an overwrought melodrama whose messages aren’t especially original. However, I would contend that heartfelt emotion – the kind often on display in this film – is not the same as melodrama, and it’s refreshing to see a movie that reflects this quality as well as this one does. And, even if its messages aren’t particularly groundbreaking, either in terms of their cyber world cautions or their metaphysical precepts, they’re far from trite or insignificant (and certainly can’t hurt by being repeated). “Disconnect” is easily the best release of 2013 thus far, and I sure hope it doesn’t get forgotten at awards time (though its release this early in the year, unfortunately, could hurt its chances in that regard).

Restoring our connections to one another, as well as to our awareness of the innate connectedness of all things in the Universe, is one of the chief challenges we face these days. Movies like “Disconnect” help to remind us of that, providing us with insights into its importance, as well as illustrations for how we might go about getting it back. And we’d be wise to pay attention, for the stakes are quite high – both for the future of our species and our planet. 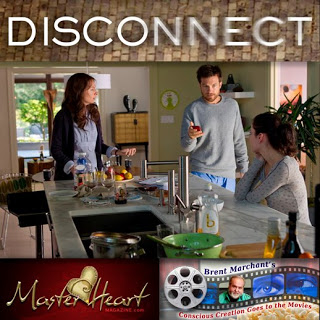