‘Now You See Me’ works magic on screen

We’re all familiar with such magic tricks as pulling a rabbit out of a hat or sawing someone in half. These fun little ruses have entertained us for ages, often prompting enthralled onlookers to wonder how such supernatural feats are accomplished. But such simple stunts are nothing in comparison to the grand creative exploits successfully executed by a team of illusionists in the magically enjoyable new release, “Now You See Me.”

There’s magic in the air across the country. In Chicago, card trick master J. Daniel Atlas (Jesse Eisenberg) amazes crowds gathered on street corners with feats of creative trickery. Meanwhile, in New Orleans, mentalist Merritt McKinney (Woody Harrelson) captivates and surprises tourists with his hypnosis and mind-reading skills. Out west, in Los Angeles, escape artist Henley Reeves (Isla Fisher) wows audiences with breathtaking stunts. And, in New York, sleight of hand maestro Jack Wilder (Dave Franco) stuns unsuspecting spectators with lightning-fast moves that leave heads spinning. So what do these four practitioners of playfully deceitful legerdemain have in common? They each receive a Tarot card with an invitation directing them to a rundown apartment in lower Manhattan for a meeting with a mystery – one that’s about to change their lives in incredible ways.

A year later, the magicians find themselves on a glitzy Las Vegas stage performing under the name the Four Horsemen. Under the sponsorship of wealthy impresario Arthur Tressler (Michael Caine), they work their magic before a packed house, performing feat after amazing feat. But, as mesmerizing as those tricks are, they pale in comparison to their closing routine, one in which they rob a bank – in Paris. With the aid of an audience member (José Garcia), the Horsemen magically teleport their unsuspecting colleague from Nevada to France, where he helps his stateside accomplices steal a stash of 3.2 million Euros. Moments later, the money miraculously appears in the Vegas theater, where it showers down upon ebullient spectators eager to scoop up some of the cash. Talk about finales!

When the Parisian bank officials open their vault and find it empty, they immediately call in authorities in Europe and the U.S. The American side of the investigation is headed up by FBI agent Dylan Rhodes (Mark Ruffalo) with the aid of French Interpol agent Alma Dray (Mélanie Laurent). They arrest the Horsemen, who put up no resistance, but, thanks to their deft trickery and unquestionable confidence, they quickly proceed to make the investigators look like fools (and fools who are unable to charge them with any crimes at that). The magicians walk out of jail, accompanied by their grinning benefactor, and head off to their next show in New Orleans, which they promise will include a feat even more spectacular than the one they just pulled off.

Frustrated at the blatant arrogance of the slick thieves, Rhodes and Dray look for whatever assistance they can find to help them nail the slippery crooks. And, remarkably, that help comes to them unsolicited in the guise of Thaddeus Bradley (Morgan Freeman), a former magician-turned-debunker, who has built a successful career making videos exposing how magicians pull off their tricks. Bradley attempts to strike a deal with the authorities, who reject his offer out of hand, partly because of what it amounts to and partly because of the public relations nightmare that would result if word were to leak out about the FBI’s involvement with someone like him in an official investigation. Before leaving, though, Bradley warns Rhodes and company that they’re fools for failing to appreciate how professional magicians operate – and what they’re really capable of.

Meanwhile, the second act is about to play out in the Big Easy. With the authorities and Bradley in tow, the Horsemen prepare for their next show, which they boast is the setup for their final, and biggest, trick of all, a spectacle of monumental proportions to be carried out subsequently in New York. But, before they descend upon the Big Apple for that ultimate score, the Horsemen have a performance to give in New Orleans, one that’s sure to be full of twists, turns and huge surprises for those still trying to figure them out, as well as those who think they know them best. And what a show it is!

So why would a group of magicians go to all the trouble of robbing a bank only to turn over the fruits of their heist to the audience? In part it has to do with one interpretation of the true purposes behind the origin of magic.

In conducting background research for her investigation, Dray learns that sleight of hand techniques were said to have been developed in ancient Egypt, where high-ranking servants of the pharaohs who were appalled at the slavish treatment of their junior peers discovered how to steal food for them without the royals’ awareness. Dray quietly speculates that the spirit of this practice may be the motivation driving the magicians’ true agenda. After all, the institution they rob appears to be one of those uncaring mega-banks, an organization whose compassion level is about on par with that of the ancient Egyptian rulers. In light of that, then, bringing down such an all-powerful institution in a dramatically impactful way would seem an aptly fitting goal for this eager band of illusionist “activists”; their Biblically inspired apocalyptic name – the Four Horsemen – suits them perfectly as zealous, undeterred vanquishers of a supposedly unassailable giant. Indeed, as seasoned magicians would agree, there really is more than meets the eye going on here.

Regardless of their motivation, though, the magicians ultimately accomplish something even more significant through their actions – they expertly demonstrate what really matters in making the conscious creation process work. In essence, their unshakable faith in their ability to successfully carry out their feats is what makes them happen, no matter how seemingly improbable or miraculous they might appear. Now, some debunkers and naysayers might argue that the performers simply employ clandestine (but explainable) techniques and gadgetry in executing their tricks, thereby negating whatever ‘magic’ might allegedly be involved. However, does it really matter what “mechanics” they draw upon to achieve their goal? No matter what tools they use, they’re utterly convinced they can pull off their implausible stunts and entertain their spectators, all the while making things look effortless and mystical. In the end, it’s their beliefs that ultimately make such results possible; the mechanics of their tricks, while in fact tangible (but discrete), are merely the means of pulling them off.

The example they set through their magic is something we’d all be wise to follow when seeking to achieve cherished goals. If we look to accomplish a particular objective, we should focus on the outcome more than on the methods for getting there, just as the magicians do in carrying off their tricks. All too often, though, we place too much emphasis on how we attain our goals and not enough on the goals themselves. By shifting our attention to the result, however, we significantly increase the likelihood of its fulfillment; the specific means for achieving the outcome will reveal themselves, and, as long as we’re paying attention, we’ll recognize the solutions when we see them.

An admonition often used by magicians in describing their craft – “Don’t look too close or you’ll miss too much” – seems appropriate in this context. Looking too closely is analogous to putting too much attention on the means and not enough on the ends; if we do so, we just might miss the solution we seek, just as spectators often overlook the actual sleight of hand technique at work as a trick is carried out. We ignore this advice at our peril, too. In fact, that’s how magicians (and politicians!) get their audiences (and constituencies) to buy into (i.e., “believe”) the artfully enacted deceit; by getting onlookers to focus their attention on the mechanics of what trick is unfolding, rather than the outcome of what that stunt might be, the illusionist perpetrators are able to create (i.e., get away with) their carefully crafted deceptions. (Now that’s a lesson we should all heed.)

For better or worse, though, working magic is essentially what we do as conscious creators. In fact, the ways in which we employ our intellect and intuition to form the beliefs we use in the manifestation process is sometimes referred to as “the magical approach” to conscious creation. But, regardless of what one calls it, conscious creation is truly the practice of everyday miracles made real. What the Horsemen do is, for all practical purposes, the same thing we do every day, only on a grander scale – but one that serves as a tremendous source of inspiration, both for those in their fictitious audiences and those of us watching the action unfolding on screen.

“Now You See Me” is a raucously fun thrill ride, a wonderful piece of summertime escapist fluff, yet its deceptively subtle, metaphysically rich narrative is surprisingly deeper than the cinematic clothes it wears. I’ll admit that I wasn’t terribly impressed by the trailer, but I was very pleasantly surprised at the outcome (proving my point that even I was guilty of initially looking too closely at the means and not enough at the ends). Watch this movie for its sheer enjoyment, and you won’t be disappointed (the film’s terrific special effects alone are well worth it). But pay attention to the themes underlying its pretext, and you’ll be richly rewarded.

The movie features decent performances across the board, except for Ruffalo, whose over-the-top portrayal is a bit much (even in scenes where it’s called for). The picture also does a great job of explaining how some of the tricks work, but it doesn’t reveal so much that it spoils the fun that magic really is. Nevertheless, don’t spend a lot of time looking for the wires or mirrors that make the tricks work; you’ll only be cheating yourself out of a good time if you do.

Magic is something we often think of as being reserved for a select talented few. But, as this picture reveals, it’s something we can all practice, on scales great and small, as long as we believe in ourselves, employ genuine intents and know where to place our focus. By doing so, the results just may astonish everyone – including ourselves. 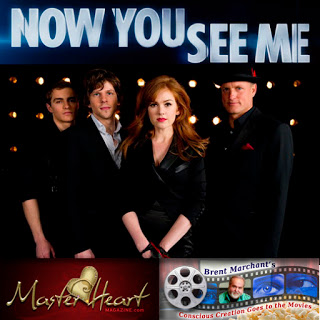