‘Man of Steel’ shows us how to soar

Aspiring to become more than what we perceive ourselves to be is a goal that many of us hold dearly. Following through on that undertaking can be a challenging process, though, particularly when we realize everything that’s involved. Nevertheless, those of us who are undeterred won’t allow potential obstacles to hold us back in this pursuit, especially when we avail ourselves of guidance and inspiration on how to proceed, concepts that are superbly showcased in the new summertime action adventure, “Man of Steel.”

The planet Krypton is a dying world. Having served as home to a technologically advanced species for eons, it’s now on the brink of its demise, an outcome attributable to its inhabitants’ mismanagement of the planet’s natural resources. Sadly, the end of Krypton also means the end of its people unless something can be done quickly to evacuate at least some of the population. Leading the argument for evacuation are Jor-El (Russell Crowe), Krypton’s chief science advisor, and General Zod (Michael Shannon), the planet’s military leader. However, with time running short, no meaningful evacuation plans in place and incessant bickering about how to proceed, the prospects of saving anyone or anything of Krypton look increasingly bleak.

Given these circumstances, Jor-El and his wife, Lara (Ayelet Zurer), decide to take drastic measures. They plan to evacuate their infant son, Kal-El, by sending him to a new celestial home, his destination being a distant planet known as Earth. But, not long before Kal’s departure, General Zod learns of Jor-El’s plans and the allegedly illegal, morally offensive acts he perpetrated to make his son’s escape possible. With planetary Armageddon looming, one might wonder why someone like Zod would still be preoccupied with matters such as this, but, as the planet’s chief law enforcement officer, he feels compelled to execute his duties right up to the end. Just as Kal’s ship departs, Zod and Jor-El do battle with one another, a conflict that ends in Jor-El’s death and earns Zod a prolonged sentence in interdimensional confinement.

With Kal-El safely on his way to Earth, at least something of his home world’s existence is preserved. His escape was fortuitously timed, too, for, not long after his departure, Krypton’s end at last comes. The planet’s explosion, however, has an additional, and unintended, outcome – it liberates the once-confined general, who’s hell-bent on tracking down the object of Jor-El’s “transgressions,” no matter what it takes or where it takes him.

Kal-El, meanwhile, arrives on Earth. His ship crash-lands in a field near Smallville, Kansas, where he’s taken in by a childless farming couple, Jonathan and Martha Kent (Kevin Costner, Diane Lane), who raise the alien youngster as their own, naming him Clark. But, as Clark grows up, he quickly learns he’s very different from the other children, possessing exceptional strength and remarkable powers that no one else has. Clark’s extraordinary abilities are due to his exposure to the sun, a younger star than the one that illuminated his native Krypton and whose more intense solar radiation amplifies his physical capabilities. Needless to say, those astonishing talents sometimes scare Clark’s peers (as well as Clark himself). But, with the loving guidance of the Kents, as Clark enters adolescence and adulthood (Henry Cavill), he learns to adapt to his differences and to manage how and when to make use of them.

Even with that awareness, though, Clark is still left with the challenge of discovering and understanding his true nature, an odyssey that takes him to many parts of the globe in search of himself. It’s a journey that exposes him to a wide range of experiences and introduces him to a diverse array of people, such as intrepid newspaper reporter Lois Lane (Amy Adams). It also eventually leads him to discover the truth about his off-world origins.

With the gaps in his background at last filled in, Clark finally feels ready to take up the challenge of finding his own place in the world. And that couldn’t happen soon enough, both for himself and his fellow earthlings, with the arrival of an unexpected visitor – General Zod. This “Super Man,” this “Man of Steel” is thus about to have his potential put to the test at the hands of an old family nemesis – someone who’s obsessively convinced he has a major score to settle with someone he’s never met.

Embracing one’s personal power might seem like something everyone would naturally want, but such is not the case. In fact, we’re often frightfully intimidated at the prospect. As author Marianne Williamson wrote in her book A Return to Love: Reflections on the Principles of A Course in Miracles (HarperCollins, 1992), “Our deepest fear is not that we are inadequate. Our deepest fear is that we are powerful beyond measure.” So it is with Kal/Clark, who struggles to come to grips with what he’s capable of. On more than one occasion he has witnessed “lesser beings” misusing what power they possess, so the prospect of uncontrollably unleashing his considerably superior capabilities frequently stops Clark in his tracks, giving him pause to evaluate what he should do.

This principle parallels what conscious creators often go through as they grow into their own power. Learning how to employ the practice judiciously, tempered by restraint and wisdom, is arguably one of the most important lessons of our conscious creation education. It teaches us how to use our abilities responsibly. It also encourages us to employ these skills in furthering such causes as justice (rather than vengeance), compassion (rather than callousness) and selflessness (rather than selfishness). And, through it all, it also impels us to overcome our fears (in this case, a potentially big one, the fear of success) so that we may move forward in our lives courageously, even heroically.

Possessing as many powers as Kal/Clark does can easily be overwhelming, something else he needs to learn how to handle. This is best illustrated in a flashback to our hero’s childhood, when a 9-year-old Clark (Cooper Timberline) first begins to become aware of his x-ray vision capabilities. He initially freaks out at the prospect of being able to see inside others, a revelation that causes him to flee in fright. He even secludes himself in a closet in a futile attempt to turn off the capability. However, thanks to Martha’s comforting words of reassurance, he comes to appreciate the ability as something “natural” where he’s concerned. By developing focus and tuning out unnecessary distractions, Clark is further able to refine his special skills, enabling him to master those abilities and allowing him to make use of them with proficiency and without hesitation.

As Clark grows as a sentient being, his character evolves (in his case as someone who represents – and embodies – the best of two worlds). He comes to recognize, as practiced conscious creators do, that evolution is a natural state of affairs, that we’re all in a constant state of becoming, and the more freely we embrace that notion, the more we’re able to relish the joys of creation and existence that it affords.

This is in stark contrast to what happens to those who are unwilling to accept this idea, such as General Zod. Life can be frustrating and difficult for such individuals. By failing to recognize that certain lines of probability are meant to come to an end once they’ve run their course, they set themselves up for heartache and agony by trying to hold on to what should be let go. The fallout from such lost causes can become exacerbated, too, when diehard adherents engage in desperate attempts to sustain what’s clearly meant to fall away. And, in the end, no matter what they might do to forestall the inevitable, the inevitable will always win out, a realization that can be a particularly painful lesson for those who let stubborn hubris get in the way.

By recognizing, embracing and practicing all of the foregoing principles, we each have the potential to become our own “super men” and “super women,” at least metaphorically speaking. Kal’s story thus serves as a fable to symbolize our own personal growth and development, a call to rise above our current status and become more of what we’re truly capable of being. Through such experiences, we even have the potential to live out our value fulfillment, the conscious creation principle having to do with realizing our destiny for the betterment of ourselves and those around us. Kal certainly understands what it means to live his life in this way, providing us with an exceptional example we’d all be wise to emulate, no matter what context we apply it to.

“Man of Steel” is a flat-out winner in virtually every respect, thoroughly entertaining and extremely thoughtful from start to finish. It features great performances across the board (particularly Shannon), thanks to the picture’s spot-on casting. The numerous action sequences are punctuated by terrific special effects and a wonderful musical score, but they’re only part of the story here. It’s indeed refreshing to see a film of this genre that doesn’t rely exclusively on explosions and fight scenes to carry the narrative, for this movie is as much a showcase for its characters as it is for its mind-blowing high-tech wizardry.

That said, perhaps the film’s greatest asset is its knock-out screenplay, which relates the Superman saga in a compelling new way. Viewers are given a much more thorough treatment of the character’s back story, and, through a series of well-placed flashbacks, the film shows in considerably greater detail how and why Clark Kent and his superhero alter-ego became who they are. The material is also presented with a more mature tone than in previous iterations of the Man of Steel mythology, elevating the story line to a more meaningful and sophisticated level. But, then, that shouldn’t come as any surprise, given that the story and script were developed by Christopher Nolan and David S. Goyer, the driving forces behind the most recent series of “Batman” movies, all of which feature comparable subject matter treatment. Give credit also to director Zack Snyder, who has taken a major step up in his craft with this offering, easily the best work he’s done to date.

Whether we’re aware of it or not, a Superman resides within each of us, but we’ll never realize that unless we allow this archetype’s emergence. Kal’s story thus serves as an eloquent allegory for how we can give life to our own latent superheroes. In an age with as many challenges as we face, we’d be wise to birth that powerful part of ourselves in hopes that doing so can better our planet and all who dwell on it. If we doubt that, we need only look to the fate of Krypton, a catastrophe not unlike one we might face ourselves someday, but one that we also just might be able to avoid if we permit our men and women of steel to step forward to prevent it. To that end, then, may we all have the courage, wisdom and insight to take the necessary measures to save our world – before it’s too late. 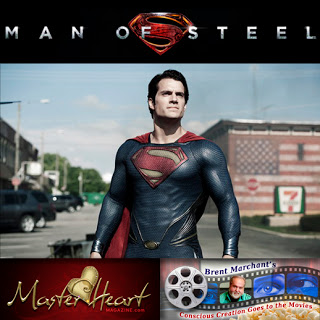