When life doesn’t turn out as hoped for, it’s easy to slip into despair. But, if we adhere to the principles of conscious creation, we must also realize that, however our existence unfolds, the results ultimately originate with us. How we respond to those outcomes is what makes the difference in terms of how much fulfillment we get out of the experience and how we might change our circumstances if need be. These are some of the significant themes that characterize the story in the charming new comedy-drama, “Unfinished Song.”

If anyone ever epitomized the persona of a “curmudgeon,” it would be Arthur Harris (Terence Stamp). The crusty, middle class British retiree complains about virtually everything from indoor smoking restrictions to the well-meaning gestures of others to the life led by his son, James (Christopher Eccleston), a blue collar divorced father who works hard to help his parents and support his daughter, Jennifer (Orla Hill). In fact, about the only thing Arthur doesn’t complain about is his beloved wife, Marion (Vanessa Redgrave), whom he truly adores. But, as insufferably grumpy as Arthur appears on the outside, Marion knows that his allegedly sour demeanor is mostly benign. She’s well aware that, deep down inside, he possesses the disposition of a pussycat; she just wishes that he’d let it out for everyone else to see.

Marion’s wish, as heartfelt as it is, however, may also be one of her last. She’s rapidly succumbing to an aggressive form of cancer that leaves her quite debilitated much of the time. But, as someone whose personality is the antithesis of Arthur’s, she refuses to let her illness deter her from enjoying what time she has left. Marion spends much of that time singing with a seniors’ choral group (the OAPz) at a nearby community center. Leading the chorus of spry septuagenarians is Elizabeth (Gemma Arteron), a spunky young music director who conducts her crooners in a selection of pieces not typical of their age group, including works by the likes of Stevie Wonder, Cyndi Lauper, the B-52s and Salt-n-Pepa.

True to form, Arthur thinks the OAPz are making fools of themselves. Marion, by contrast, is having a blast. And, by intentionally selecting music not typical of her performers’ generation, Elizabeth believes she’s helping to keep the seniors youthful and vital compared to others their age. Marion and Elizabeth hold out hope that Arthur will come to see the joy their music brings them. But, as one who’s content to wallow in dour self-absorption, not to mention agonizing over his wife’s impending demise, Arthur won’t allow himself – as Cyndi Lauper’s hopeful lyrics earnestly implore – to “let [his] true colors come shining through.” And, as one who’s anxiously watching time run out, Marion prays that her husband comes to this realization for himself before it’s too late. 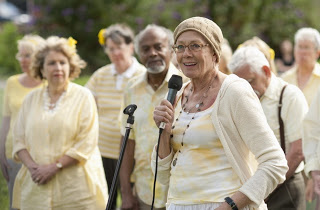 While singing to her curmudgeonly husband, Arthur, terminally ill songstress Marion Harris (Vanessa Redgrave) attempts to demonstrate how much enjoyment and fulfillment can come from creating for its own sake in director Paul Andrew Williams’s delightful new release, “Unfinished Song.” Photo by Nick Wall, courtesy of The Weinstein Co.

Anyone who actively engages in conscious creation realizes that we create our reality through the thoughts, beliefs and intents we hold. The existence we experience is thus a direct reflection of what we believe, mirroring that outlook back to us with remarkable fidelity. So, given Arthur’s gloomy mindset, is it any surprise that his reality ostensibly reflects what thoughts he’s putting out? Having apparently bought into the idea that “life always disappoints,” he thus experiences an existence seemingly in line with that belief.

However, it should be noted that the emphasis here is on the word “seemingly.” As Marion so astutely observes, Arthur’s true demeanor is unlike the disposition he appears to put out. She’s without doubt that much of his attitude is mere bluster, that he’s truly a warm, compassionate soul on the inside – and she should know, having been the direct beneficiary of his innate kindness for all the years of their marriage. She’s convinced, even if Arthur isn’t, that he’ll get much more satisfaction out of life if he’ll only let that side of himself surface. That concerns her, too, given that her departure from his world is looming; she sincerely hopes that he’ll find a way to enjoy what remains of his life once she’s gone, especially since she’s apparently been his sole source of pleasure for a very long time.

To turn things around, all Arthur need do is rewrite the beliefs he employs to create his reality. However, that may not be as easy as it sounds, especially since he’s spent years building a façade made up of disappointment-based beliefs, despite whatever his authentic self might really be like. If only he’d make the effort to take a closer look at his life, he just might find that it’s not so bad after all, that many elements of it are right in line with the uplifting nature at the core of his being. This is particularly important for two areas of his life – the joy that music provides and the relationship he has with his son. If Arthur were to see these aspects of his existence with greater clarity, he just might reassess them and consequently discover that his life is much more worth living than he’s typically believed. 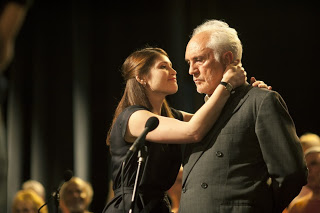 To that end, the film strongly encourages all of us to consider the merits of creation for its own sake, no matter how the process is applied or how “well” any of its manifestations might turn out. A song sung with joy for the sake of its mere expression is intrinsically beautiful, whether it’s performed with superior artistry or entirely off-key. Marion and her choral peers understand this, and, even though they’re not the best singers, they always seek to get better (but don’t really care if they do). The joy that comes from the act of creating is reward enough. That’s part of our birthright as beings who have chosen to explore what characterizes the experience of physical existence, for better or worse. Now if only the rest of us could see that….

“Unfinished Song” is an enjoyable way to spend an afternoon at the movies. It’s admittedly somewhat predictable and manipulative, but its predictability and manipulation are so well handled – thanks to fine writing and the superb performances of Stamp and Redgrave – that it’s easy to overlook these shortcomings. The film features a wealth of great laughs, as well as a number of very touching moments, all skillfully handled by director Paul Andrew Williams. Arthur’s back story is a little underdeveloped (we never get clear explanations about the source of his pervasive bitterness or his disappointment with James), so some strengthening in this area would have done much to improve the overall narrative.

“Unfinished Song” shows us that it’s never too late to change our tune – as long as we allow it to happen. By living with integrity, honoring the nature of our true selves and paying attention to the inherent character of our reality, we can alter our circumstances to our liking, providing us with lives of greater satisfaction and fulfillment. Indeed, if Marion can do this for herself, considering her experience, we’d be wise to follow her lead.

Maybe there’s hope for us yet.