Every year, thousands of tourists flock to marine theme parks around the globe to see performances featuring large sea mammals like bottlenose dolphins and, especially, killer whales. Facilities like the SeaWorld parks feature heavily promoted, high-profile orca shows that generate billions of dollars annually from sales of tickets, stuffed animals and other souvenirs. But those prolific profits come at a high cost, as the new documentary, “Blackfish,” articulately illustrates.

So what, exactly, are the costs involved? As the film clearly shows, it involves more than just money. 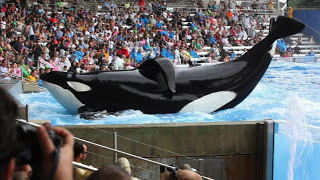 Tilikum, a male killer whale linked to the death of SeaWorld Orlando trainer Dawn Brancheau in February 2010, performs for the crowds in the riveting new documentary, “Blackfish.” Photo courtesy of Magnolia Pictures.

According to the experts interviewed for this picture, virtually all of the marine mammals in captivity are psychologically damaged in one way or another. This is especially true for killer whales, creatures who are known for being intelligent, highly social beings who live long lives in well-developed family groups in the wild. When held in captivity, however, they’re subjected to highly unnatural conditions for their species, generally confined to spaces far smaller than what they’re typically accustomed to and living out their days with whales who are seldom part of their native pods. But, if that weren’t bad enough, the offspring who are born in captivity are often taken away from their parents and transferred to other theme parks to meet marketplace demands, creating serious separation anxiety that exacerbates whatever other psychological ills these creatures may already be experiencing. (Think of what it might be like if your adoring two-year-old were suddenly snatched away from your loving arms and given to another parent in “need” of a child, and you get an idea what the whales go through, an emotional tragedy painfully depicted in the film.) 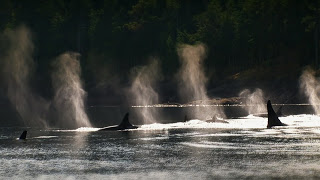 A pod of orcas swimming in the wild reveals the majestic beauty of these noble creatures, as shown in the powerful new documentary, “Blackfish.” Photo courtesy of Magnolia Pictures.

Despite the parks’ claims that these creatures are better off in captivity than they are in the wild, the experts contend the exact opposite is true. They argue that captive orcas suffer from more health problems, social conflicts and behavioral issues than their wild counterparts, ultimately living much shorter and more stress-filled lives than they would in the open ocean. As one interview subject succinctly puts it, wouldn’t each of us go a little crazy if we were forced to spend 25 years in a bathtub?

But the whales aren’t the only victims in this scenario; the trainers who work with these animals are in potential peril as well. This became tragically apparent on February 24, 2010, when SeaWorld Orlando trainer Dawn Brancheau was killed in an incident involving a whale named Tilikum, a male orca with a history of unpredictable behavior and who was linked to other incidents that were quietly kept under wraps. What’s more, Tilikum’s unfortunate exploits are not isolated occurrences, either; other captive whales (some of whose genetic makeup includes Tilikum’s DNA) have been implicated in other incidents of violence against humans, something that has never been known to occur among orcas in the wild. Indeed, the fact that Tilikum’s DNA is in the genes of many orcas bred in captivity around the globe should give trainers worldwide cause for legitimate concern.

Knowing all this, then, one can’t help but ask how we can possibly sanction such activities in all good conscience. Isn’t such treatment unduly cruel, if not downright barbaric? And how would we feel if the roles were reversed? Wouldn’t we be pleading for our liberation as well? Moreover, is the pursuit of profit worth placing the lives of park staff members in perpetual jeopardy thanks to the whales’ erratic behavior? “Blackfish” addresses all of these questions, and it does so with unflinching candor. 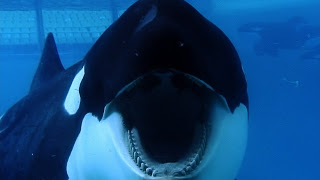 The film also says a lot metaphysically, at least by implication. As conscious creation practitioners are well aware, we each create our own realities through the power of our beliefs working in conjunction with the power of the Universe. Yet, despite the outcomes that arise from our individual efforts, we also work collectively to manifest co-created mass events, thanks to the intrinsic connectedness that binds everything in the Universe.

So how do these notions relate to the plight of captive killer whales? Our materialization of popular marine parks like those showcased in the film is an example of a mass event that’s designed, arguably, to draw our attention to (and thereby make us aware of) how we treat the other creatures who are part of our collective connected existence. At its heart, a co-creation such as this provides us with a much-needed lesson about ourselves. It essentially holds up a mirror that allows us to see ourselves in a light that we might not readily recognize otherwise. It prompts us to look at our nature, our beliefs and our behavior, some of which may be in serious need of significant re-examination. It forces us to ask ourselves questions like, knowing what we do, how can we allow this to go on? Are we really honoring our fellow earth creatures by keeping them captive and compelling them to perform inane stunts just to get fed? At bottom, are we really so superficial, self-centered and uncaring that we’ll go to such lengths for the sake of mere entertainment value?

Ideally, most of us would probably like to think we should be readily aware of the answers to such questions. But, if we’re indeed so oblivious about our actions that we can’t see the errors of our ways, then maybe we need to materialize creations like this – disturbing though they may be – to make the answers painfully obvious. Pointing out the folly of our ways, one would hope, would help to keep us from repeating them. What’s more, experiences like this should also help to enlighten us about the sacrifices the whales are making to further our maturation and education. By becoming aware of all this, we might be more likely to treat not only whales but all of our fellow earth dwellers more humanely (just imagine what a reality embodying that principle might be like!).

Whales are appropriate teachers for this, too. As pointed out in the film, their brains appear to be more developed than our own, suggesting that they may well possess an intelligence that exceeds ours, one that naturally, even matter-of-factly, recognizes the collective consciousness that binds all the members of their species. Such a heightened awareness enables them to act in concert with one another when the need arises, actions that are demonstrated repeatedly throughout the film, especially among orcas in the wild who are part of their native pods. This natural sense of collaboration allows them to accomplish things that serve the best interests of the collective. Indeed, by cooperating rather than competing, they can achieve much. They thus provide a shining example to follow, enlightening us to aspects of connectedness that right now we can hardly begin to fathom and thus encouraging our evolution as a species. However, it’s not realistic to assume they can teach us much of anything if we treat them unnaturally, subjecting them to harsh conditions for the sake of performing circus tricks. 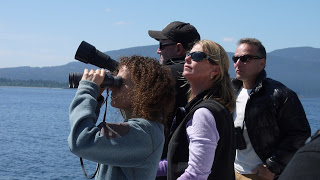 “Blackfish” is a powerful documentary, technically brilliant and emotionally stirring. Its superb combination of whale footage, interviews with former trainers and marine experts, and media report segments is well packaged, skillfully edited, taut and to the point, without filler or padding. Its full disclosure of SeaWorld’s unwillingness to respond on-camera to the contentions raised in the picture lends credibility to the integrity of the reporting, too, demonstrating the filmmakers’ sincere desire for journalistic fairness, an effort that’s truly to be commended. Keep your eye on this film come awards season, as it stands a good chance to capture some well-deserved feature documentary honors.

Sometimes it takes “a dumb animal” to teach us some of our most valuable lessons, but, as “Blackfish” reveals, killer whales are anything but dense. In fact, they have the potential to show us much about ourselves, as well as who we’re capable of becoming. And, since conscious creators know that we’re all in a constant state of becoming, it truly helps to have mentors to help show us the way in that regard. “Blackfish” makes us aware of who some of those teachers are; now, if only we’ll let loose the shackles that bind them – and let them do their jobs.