‘In a World’ gives voice to one’s power

When we seek to realize a dream, we start by envisioning the idea in our consciousness, forming beliefs to support it and then taking actions that, we hope, will bring it into being. But, to truly make that prospect a reality, we must also infuse the process with the personal power that drives its materialization. And the more we give voice to that notion, the more likely we are to see it manifest, a theme explored with loads of laughs in the uproarious new independent comedy, “In a World….”

For years, Don LaFontaine was the voice of the movie industry. In a career spanning four decades, he did voiceovers for more than 5,000 motion picture trailers. His velvety, booming intonation became virtually synonymous with film previews, especially those introduced with his signature catchphrase, “In a world….” In fact, LaFontaine’s services were in such high demand, and his industry presence was so ubiquitous, that it was virtually impossible for anyone to match the level of success he attained – that is, until 2008, when he died.

With the passing of this real-life industry giant, the door thus opened for the emergence of a successor, and that’s where this film comes in. It chronicles the fictitious jockeying that takes place among the contenders eagerly seeking to fill the king’s shoes.

According to the picture’s story line, one of the aspirants who grew up in LaFontaine’s shadow – and who began attaining wider prominence after the legend’s death – is Sam Sotto (Fred Melamed). Having achieved a respectable degree of acclaim throughout his career, Sam has come to be seen by many in Hollywood as the industry’s heir apparent. But, given his advancing age, others wonder about his future, viewing him as something of a relic and preferring a fresh, new voice instead – a realization that even Sam himself acknowledges, albeit begrudgingly.

So who’s going to don the grand master’s mantle? That’s where brash young vocal artist Gustav Warner (Ken Marino) comes into play. With a great set of pipes, an array of industry connections and Sam’s professional blessing, Gustav seems poised for boundless success. But is Gustav really the new “it” guy that he and Sam think he is?

Enter Carol Solomon (Lake Bell), a thirty-something voice coach and accent specialist who helps high-profile movie stars (like Eva Longoria, who plays herself) polish their delivery. She also just happens to be Sam’s daughter, and she has long dreamed of following in her father’s footsteps. But, in the good ole boy network that is Hollywood, the idea of a woman doing movie trailer voiceovers is tantamount to heresy, and doors swiftly close with each attempt she makes to break into the business. Even Sam openly discourages her, condescendingly urging her to be a good little girl and stick to what she does best. And, if that weren’t bad enough, he’s quick to tactlessly inform Carol that, despite her currently dismal career prospects, he wants her to move out on her own, mainly because his chirpy girlfriend, Jamie (Alexandra Holden), wants to move in. 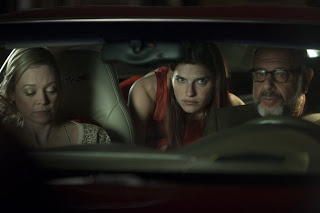 With her life seemingly hitting the skids, Carol desperately looks to regroup. She moves in with her sister, Dani (Michaela Watkins), and brother-in-law, Moe (Rob Corddry), while she gets her professional act together. She soon gets a big boost in that arena, too, when Louis (Demetri Martin), a talented young sound engineer, helps her land her first voiceover gig, one for which she bests, of all people, Gustav.

When word of a woman landing a voiceover job hits the streets, the reaction is mixed. Some are suitably appalled that someone of the fairer sex would dare step onto the big boys’ turf. But others are so impressed by this novel, gutsy professional coup that Carol is fast-tracked into the running for a plum assignment, the voiceover work for a blockbuster “quadrilogy” under development by bigwig producer Katherine Huling (Geena Davis). The highly coveted pot for this job is further sweetened by the fact that the voiceover copy for the project leads off with the iconic words “In a world…,” the sacred text that has been conspicuously out of use since LaFontaine’s demise.

Landing the job will not be easy, though; Carol faces stiff competition, not only from Gustav, but also from dear old dad, who decides to pursue the work at the eleventh hour, mostly out of sexist, egotistical spite. Suddenly, professional rivalries turn highly personal. But, with so many supporters from so many camps pulling for Carol, she just might surprise a lot of people, including herself, and not necessarily for the reasons one might imagine. 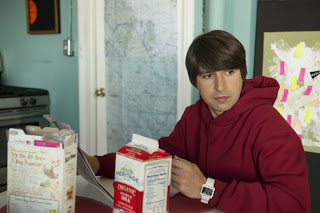 In a community as supposedly liberal as Hollywood and an industry as allegedly creative as cinema, it’s ironic that such limited, sexist, archaic conditions persist, even when it comes to something as seemingly innocuous as who narrates the text of a movie trailer. Yet, as conscious creators are aware, beliefs are amazingly powerful forces, and they can hold on incredibly stubbornly when allowed to become entrenched, as is clearly the case here. So it’s at times like this when revolutionary creative acts like those Carol undertakes are required to shake up the prevailing paradigm and move things forward. And moving things forward is indeed important, not only for avoiding the pitfalls of stagnation, but also for furthering the spirit of conscious creation, which, by its nature, maintains that we’re all in a constant state of becoming, especially where breaking through limitations is concerned.

I find it ironic that these ideas are symbolically explored in the context of the voiceover industry. Through Carol’s courageous actions, we witness her power being given voice. And, by making that happen, she thus sets an example for others, not just for those in her specific profession or for those of her particular gender, but for anyone seeking to stretch, grow and develop themselves, especially when it comes to pursuing their dreams. With her aspirations given voice, they’re allowed to manifest physically, thereby birthing yet another unexpressed aspect of existence, one that’s never been explored before.

Now that’s a message truly worth listening to!

“In a World…” is a funny, quirky romp from start to finish, smartly written with ample unexpected humor and terrific performances across the board, particularly those turned in by Bell and Melamed. It provides an intriguing look inside a business that few people see up close but whose product is something virtually all of us readily recognize. It’s also an inspiration to women who take delight in seeing yet another glass ceiling effectively shattered. Admittedly, the film sometimes gets a little bogged down in a few too many subplots, and some of the humor is a tad silly, but the picture never fails to entertain, and it makes its points without becoming hostile, preachy or sanctimonious.

This project represents quite an undertaking – and quite an accomplishment – for writer/actor/director Lake Bell. She has made an impressive debut as a feature film auteur, setting a high standard for movie comedy and establishing herself as someone to watch going forward. If this release is any indication of what she has to offer, I can’t wait to see what she comes up with next.

“In a World…” is currently playing in limited release, mainly in theaters specializing in independent cinema. However, the picture has received much praise and considerable buzz in the media, so this bodes well for wider recognition and perhaps even wider release. If that doesn’t come to pass, however, be sure to seek it out once it’s available on DVD; it’s definitely worth the effort.

Seeing our heartfelt desires materialize is a genuinely rewarding experience, especially when we approach the challenge with passion, confidence and integrity. Carol comes to understand this, but not only for her own ego fulfillment; she recognizes the importance of blazing a trail, making it possible for others to follow her lead by setting an example that shows how it’s indeed possible to access what was once thought inconceivable. And, considering the nature of, and means behind, her mission, that’s something worth shouting about.