What’s real and what isn’t? From a conscious creation perspective, anything we perceive is technically “real,” so a better question would probably be, what’s genuine and what isn’t? Making that distinction is where the power of discernment comes into play, a theme that permeates the story line of the charming new romantic comedy, “Austenland.”

No matter what she does, Jane Hayes (Keri Russell) just can’t seem to find love. It’s not for a lack of trying, but nothing ever seems to work out. Some would say – including some potential suitors – that it’s because she has unrealistic expectations about relationships, thanks to her consuming preoccupation with the classic romances of English novelist Jane Austen (1775-1817). Like a prototypical Austen-esque heroine, Jane is looking to be swept her off her feet by an amorous aristocratic hero a la Mr. Darcy from the author’s classic opus, Pride and Prejudice. But, in this day and age, what man realistically can live up to such a storybook image?

With nothing to lose, Jane decides to pay a visit to Austenland, a sort of Jane Austen role playing theme park located on an English country estate, where guests live out romantic adventures portraying characters inspired by the facility’s namesake. They interact with actors (to use the term loosely) who play characters in customized scenarios created for each of the guests. Jane’s visit costs her nearly all of her life savings, but, believing that she has nothing to lose, she takes a chance that, just like Austenland’s promotional brochure promises, she’ll come to know love by the end of her stay. 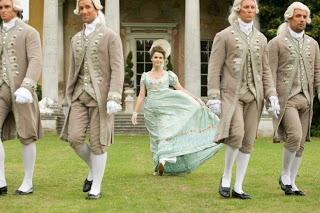 Upon arrival, Jane is greeted by the hostess for her visit, Mrs. Wattlesbrook (Jane Seymour), and is assigned her fictitious identity, Miss Jane Erstwhile, a woman of limited standing whom the estate takes pity on. She then meets two companions who’ll accompany her on her adventure, a sweet but dimwitted fellow American who goes by the character name Miss Elizabeth Charming (Jennifer Coolidge) and an emotionally overwrought, self-serving aristocrat dubbed Lady Amelia Heartwright (Georgia King). Next, she’s introduced to the facilitators of her little drama, the standoffish Mr. Henry Nobly (JJ Feild), the eccentric, adventurous Colonel Andrews (James Callis), and the dapper, swashbuckling Captain East (Ricky Whittle). And, to help Jane maneuver her way through the maze that is this protocol-driven world, there’s Martin (Bret McKenzie), a kindly stable hand.

During her stay, Jane lives out an array of Regency Era escapades (and experiences a rollercoaster of emotions in doing so). This is primarily due to the simultaneous pursuit of our heroine by two would-be lovers, Martin and Mr. Nobly. Martin doesn’t hesitate to make his feelings known, and Jane feels drawn to him, but, as a mere employee and not one of the characters in the role playing fantasy, he’s expected to keep his place. Meanwhile, the once-reticent Mr. Nobly gradually warms up to the fair Miss Erstwhile the more he gets to know her, but, despite a mutual simmering attraction, Jane remains cautiously reserved to his advances, unsure of the reasons behind his seemingly inexplicable change of heart. And, over time and in true Austen fashion, all of these little dramas build to a climax worthy of the author herself, one that will keep those on- and off-screen guessing right up until the very end. Jane will have to decide for herself what’s genuine and what isn’t, a challenge that will test her powers of intuition and her ability to discern what exactly constitutes true love. 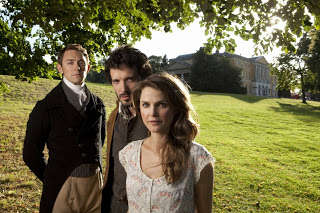 The complex, often-muddled circumstances with which Jane is presented provide the focus for the film’s central theme, that of learning one’s power of discernment. This skill is crucial for honing one’s conscious creation abilities, for it helps us to sharpen our capacity for making effective use of our intuition, one of the key components we rely upon in developing the beliefs that we use in manifesting our surrounding reality. Discernment helps to show us the way in determining what’s valid and viable as opposed to what’s illusory wishful thinking.

And what better environment to sharpen this skill than in the fantasyland that is a role playing theme park! Austenland provides Jane with a metaphysical test kitchen to try out her beliefs and to help her determine which of them align with her true self. Is she being unrealistic in believing that a real-life Mr. Darcy can come along and sweep her off her feet? Or is it truly possible that this dream can be made manifest as long as she employs beliefs that are suitable for making it happen? Or should she take a more grounded approach, looking for something more “realistically” attainable, even if it doesn’t live up to all of her desires and expectations? She’ll get an opportunity to address each of these questions through her Austenland experience. The biggest question, of course, is, which one will she choose? 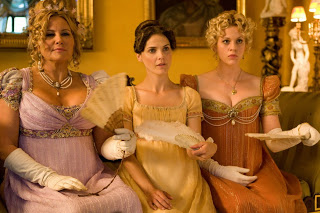 Jane’s experience offers us an excellent example that we can each draw upon in our own lives, especially when we’re faced with circumstances that force us to ask, are we truly being honest with ourselves? It’s fortuitous that this exercise is being played out in a theme park like this, too, because it shows us that the process should be fun and playful, not dour and burdensome, as many of us probably feel when addressing such questions. Indeed, Jane reveals to us that the process of self-discovery should be something to be enjoyed, not endured, and we’d all be wise to follow her lead.

“Austenland” is a hilarious cinematic romp, if a bit episodic and unevenly paced at times. But those shortcomings are more than compensated for by its ample laughs, drawn from the picture’s clever writing (as seen in such aspects as Miss Charming’s repeated failures at properly using Briticisms) and its intentional over-the-top overacting (best exemplified by the amateurish delivery of the actor, and part-time porn star, who portrays Captain East). It’s a terrific spoof of the Austen material, one that even those unfamiliar with the author’s books will no doubt find amusing (and that her fans are sure to find positively uproarious). The film also features excellent costume design and wonderfully whimsical art direction as seen in its many deliberately cheesy elements (such as its ubiquitous menagerie of bad taxidermy specimens) and anachronistic touches (like its placement of a bowl of bagels on a Regency Era breakfast table). 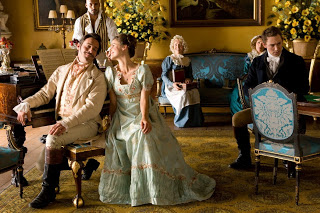 I’m truly baffled why critics have been so unduly harsh on this release. Many have criticized its exaggerated acting and technical elements as being too overblown to be credible, but then consider the source material involved here. When viewed in that light, these attributes seem perfectly in context, especially when considered from a satirical standpoint. This movie is great fun throughout, and I believe that those who don’t see it that way, unfortunately, are truly missing the point. Don’t take it so seriously, and you’ll have a great time.

“Austenland” is playing in limited release, primarily at theaters that specialize in independent cinema. But, like so many of the other wonderful indie flicks that have been released this summer, it’s well worth the effort to search it out, be it in the theater or in eventual release on disk.

When faced with trying to decide what’s genuine and what isn’t, we should all follow the example set in this film. Employing the process of discernment may be tricky at times, but it can be a fulfilling and fun-filled exercise as well, one that helps us discover what we truly want and don’t want in our lives. And, above all, it has the potential to produce the kind of happy ending that I’m sure even Miss Austen would approve of.