‘Wadjda’ inspires us to claim our power

It’s easy to allow ourselves to feel disempowered, especially under conditions where we feel as though our will has been sucked out from underneath us. That can be particularly daunting to those who operate under circumstances that are oppressive and seemingly unrelenting. Claiming our rightful power in those instances can be challenging, but it is possible, as long as we believe in the idea, a notion explored in the heartwarming new release, “Wadjda.”

Buying a new bike shouldn’t be a big deal, but, if you’re a young girl in Saudi Arabia, it’s a lot easier said than done. The prevailing wisdom maintains that youthful members of the so-called fairer sex shouldn’t engage in an activity as risky as riding a bicycle for fears that “it might compromise their virtue.” In fact, it’s just one of many everyday activities considered taboo that Westerners take for granted. Going against such cultural prohibitions is something most Saudi women wouldn’t think of challenging, but not Wadjda (Waad Mohammed). She simply won’t have it. 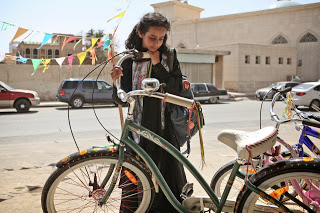 To buy or not to buy? That’s the question faced by Saudi schoolgirl Wadjda (Waad Mohammed) when it comes to purchasing a bicycle for herself, a culturally radical act, in the heartwarming new release, “Wadjda.” Photo by Tobias Kownatzki © Razor Film, courtesy of Sony Pictures Classics.

The tomboyish schoolgirl’s quest to acquire this dangerous piece of equipment arises from a dare she puts to her neighbor, Abdullah (Abdullrahman Al Gohani), who playfully taunts Wadjda while riding his bike. She wants one of her own so she can challenge him to a race, a contest she’s certain she’d win. But, when Wadjda tells her mother (Reem Abdullah) of her plan, she’s chastised for even thinking about such a ludicrous, heretical notion. It’s bad enough that she wants to expose herself to such a needlessly risky venture, but it’s even worse that her proposal involves Abdullah. After all, any public interaction – even talking – with him (or any male, for that matter) is a morally reprehensible act for a young girl, one that could get her shamed or even killed.

If Wadjda is ever to get her bike, she’s going to have to do so on her own (and, given the “radical” nature of her plan, quietly at that). In particular, she needs to keep below the radar at school and the ever-watchful eye of head mistress Ms. Hussa (Ahd), who never hesitates to delve out severe tongue lashings to her girls for even the slightest of moral infringements. To fulfill her goal, Wadjda clandestinely pursues various entrepreneurial opportunities, such as making football bracelets out of yarn, creations that produce modest amounts of money. But, to raise the substantial funds required for her purchase, she needs to find an opportunity that will provide a significant infusion of cash. 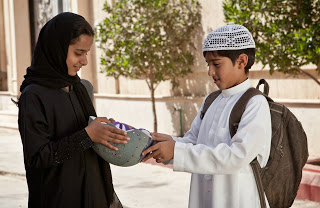 That chance comes with the announcement of the school’s annual Koran recitation competition, in which an ample monetary prize is to be awarded to the winner. As someone whose knowledge of the holy book is fair at best, Wadjda seems an unlikely candidate for the contest. But, with her goal on the line, she zealously begins studying the Koran. Wadjda’s religion teacher (Nouf Saad) is impressed with her student’s rapid improvement, warning other contestants that she’s a worthy contender. Ms. Hussa is favorably impressed as well, encouraged that her once-troublesome pupil has finally seen the light and turned a significant behavioral corner. Little do any of them know, however, what Wadjda really has in mind. The scope of her intention has implications that go beyond the mere acquisition of a bike, and even she may not be fully aware of what they are or the extent of their reach. But, as everyone will soon see, her accomplishments will have effects that are felt far and wide at home and at school and, potentially, even at the grass-roots level of Saudi society.

Wadjda’s story is a classic illustration of a conscious creator determined to push boundaries and break through the barriers of limiting beliefs. While she’s never callous or blatantly disrespectful in her efforts, she also doesn’t see any reason to blindly adhere to prevailing dictates just because someone tells her so. She’s merely following her own heart and her own sense of personal integrity to manifest that which she will. That’s something all of us should aspire to in our materialization efforts, and Wadjda provides a powerful example to follow.

Much of Wadjda’s success comes from the passion that fuels her beliefs. She’s so focused on attaining her objectives that her determination never wavers, despite whatever obstacles pop up in her way. Ironically, those roadblocks actually serve a valuable purpose as compelling motivators, keeping her committed to her intended path. This effectively shows us how maintaining enthusiasm for our beliefs is crucial to see the manifestation process through to completion. 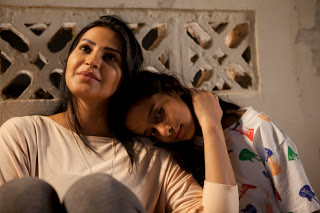 Above all, though, Wadjda’s odyssey is an inspiration to anyone who’s willing to question the status quo, not just when it comes to a matter as simple as making a purchase, but also to engaging in calculated acts of defiance. On some level, she sees the bike as an implement of liberation. In addition to providing her the freedom to physically go where she pleases, it also makes it possible for Wadjda to psychologically go where she pleases. This reinforces her belief that she’s the master of her destiny, that she’s in charge of creating her chosen reality, not those who would attempt to hold her back and keep her in place.

Support for goals like Wadjda’s may be more forthcoming than expected, too, even from unexpected sources. Surprisingly, the alleged oppressors who Saudi women are so routinely taught to cower before (i.e., men) may at times offer them more encouragement than they believe they’re entitled to. In their own way, Abdullah, Wadjda’s father (Sultan Al Assaf) and a neighborhood toy store owner (Mohammed Alkhozain) all quietly and playfully provide a measure of support. While their level of encouragement may not amount to a blanket endorsement, it’s nevertheless far from the opposing attitudes or outright threats that Wadjda and her female peers are repeatedly conditioned to expect. Fortunately, Wadjda is astute enough to pick up on this, a realization that emboldens her in her quest even more.

Those who feel oppressed and aspire to more than the seriously constricted roles and rights to which they’ve been relegated (like many Saudi women) can take heart from Wadjda’s example. While it certainly would be overstating things to call her story a feminist manifesto, it nevertheless makes apparent possibilities that the repressed may have never considered. They can draw from the courage and conviction on display here to rewrite their own destinies as fully engaged conscious creators.

“Wadjda” is a simple but powerful story, well told and emotionally effective, without ever becoming cutesy or overly sentimental. The writing and performances are solid across the board, especially those of Mohammed and Abdullah (both of whom are making their feature film debuts) and Ahd. This combination of elements makes for an enjoyable time at the movies, one suitable for viewers of all ages and backgrounds. The film is currently playing in limited distribution, primarily in theaters that specialize in independent and foreign cinema, but it’s worth searching for, especially for those seeking inspirational tales for impressionable viewers.

The back story behind this production is as almost interesting as the film itself. It’s the first feature-length movie ever filmed entirely within the Kingdom of Saudi Arabia (mostly in the suburbs of the capital city of Riyadh). It’s also the first fictional feature from director Haifaa Al Mansour, the nation’s preeminent female filmmaker and one of the country’s leading cinematic visionaries. That’s quite an accomplishment for a land without movie theaters.

No matter how overwhelming our circumstances may appear, it’s possible to rise above them as long as we hold fast to our belief in our personal power. As long as we maintain sight of the fact that we can dissolve disempowering circumstances just as easily as we create them, we can move forward confidently to manifest new conditions that better suit us. That’s something “Wadjda” teaches us, and we’d be wise to abide by its message, especially at times when it feels like we’re about to be buried by what’s around us. And, if we do so, we just might get our own bikes after all.