We’ve all undoubtedly had days where we’ve found our heads spinning, overwhelmed by the complexities before us. It’s enough to make us crazy. It’s also enough to get us to ask ourselves. “Why me?” Such are the circumstances served up in the new independent comedy, “Chinese Puzzle.”

This film, the third in a trilogy that began with “L’auberge espagnole” (“The Spanish Apartment”) (2002) and was followed up with “Russian Dolls” (“Les poupées russes”) (2005), follows the exploits of a group of long-terms friends and lovers who are now about to turn 40. And, as they approach the midpoint of their lives, a key question hangs over them: Why must life be so complicated? That thought has been weighing especially heavily on the mind of novelist Xavier Rousseau (Romain Duris). In fact, the notion has so preoccupied his thoughts that he’s even begun writing a new book on the subject, a novel bearing the apropos title Chinese Puzzle. It’s also a work he can relate to personally since it’s largely based on his own experiences.

So how did Xavier’s life get so complicated? It all started in Paris, where he had been living a comfortable life in an upscale flat with his British-born wife, Wendy (Kelly Reilly), and their two children, Tom (Pablo Mugnier-Jacob) and Mia (Margaux Mansart). However, Xavier’s seemingly blissful existence was anything but happy. He was stuck in a writing job he loathed, and tension on the home front had been mounting for some time. But, if all that weren’t bad enough, Xavier inflamed circumstances further when he announced that he had agreed to help his lesbian pal, Isabelle (Cécile de France), have a baby by volunteering to be her sperm donor. That decision went too far for Wendy, who promptly made an announcement of her own – that she was leaving Xavier and moving to New York with the kids.

Wendy’s proclamation devastated Xavier, especially when he learned that she was also intending to move in with a new love interest, John (Peter Hermann), upon her arrival in New York. Despite his begrudging reluctance to let her go, he was determined not to let the same thing happen to his relationship with his children. So, to keep Tom and Mia in his life, Xavier made plans of his own to relocate to New York, taking up residence in a cramped, dingy Chinatown apartment. His decision was eased somewhat by the news that Isabelle had also just moved to the Big Apple to be with her new lover, Ju (Sandrine Holt). But, even with the companionship of a good friend for this new adventure, Xavier still had to contend with the reality of having his life completely disrupted practically overnight. 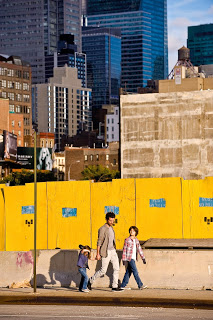 Once in New York, Xavier’s life grew progressively more complex. He often wondered how this happened (even if seemingly unforeseen events provided ever more fodder for his new writing project). So, while sorting out divorce and custody matters with Wendy, Xavier also had to wrestle with a variety of other complications, including:

* An unexpected visit from an old flame, Martine (Audrey Tautou), and her two children, Lucas (Amin Djakliou) and Jade (Clara Abbasi), a reunion with implications beyond just reminiscing about old times; and

* The birth of Isabelle’s baby and her subsequent (and less-than-subtle) flirtation with the child’s nubile young babysitter (Flore Bonaventura).

With all this going on, it’s no wonder Xavier’s life has come to resemble a Chinese puzzle. But how its pieces all ultimately fit together remains to be seen, something that will invariably play out in both the pages of his book – and the everyday events of his existence. 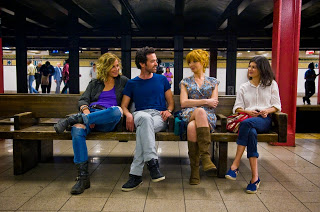 In an uncomfortable moment, novelist Xavier Rousseau (Romain Duris, second from left) attempts to keep his cool when confronted by the women in his life, including his ex-wife, Wendy (Kelly Reilly, second from right), his old frame, Martine (Audrey Tautou, right), and his lesbian pal, Isabelle (Cécile de France, left), in the new comedy release, “Chinese Puzzle.” Photo courtesy of Cohen Media Group.

So what’s the answer to the question Xavier poses in the film and in his writing? Anyone versed in conscious creation can answer that inquiry in a heartbeat – the reason Xavier’s life (or anyone’s life, for that matter) seems so complicated is that he creates it that way in the first place.

In a nutshell, the events transpiring in Xavier’s reality are a direct result of what he’s manifesting with his beliefs and intents through the conscious creation process. His existence flows from where his thoughts go. And, if he’s unhappy with what he’s creating, then he needs to look at the beliefs he’s drawing upon to materialize the existence unfolding before him, making changes as needed to create circumstances more to his liking.

Given Xavier’s vocation – one that typically calls upon its practitioners to understand their characters’ insights and motivations – it’s actually rather surprising that he hasn’t already figured this out for himself. Some might say he’s too close to the situation and unable to see what’s really going on, an argument that has some merit. However, considering the genuinely clueless outlook Xavier seems to have regarding his circumstances, those skilled in conscious creation would probably maintain that his reality is the result of practicing un-conscious creation or creation by default. Under such circumstances, he lets life happen to him without any attempt to consciously understand how or why conditions materialize as they do.

Following a path like this is akin to walking through a minefield, and conscious creation practitioners who watch Xavier on his perilous journey will probably hold their breath as he makes his way among the buried explosives. At the same time, they’re also likely to view the protagonist as Homer Simpson with a French accent. “What,” they may legitimately ask, “is he thinking?” But therein lies the inherent problem with creation by default – it’s carried out without much effort to become conscious of the way reality works.

Xavier is not the only one in this film following the path of un-conscious creation. One need only look to Isabelle’s experiences as well. Here’s someone who has a beautiful new baby and a devoted new lover, and yet she risks losing it all by carelessly chasing the skirt of the babysitter. Again, what is she thinking? But also, once again, such is the nature of creation by default.

Getting off this carousel of ignorance can be challenging, and those who ride it often have to “bottom out” on their way to reaching a point where they crave change. As painful and difficult as that can be, however, it nevertheless provides a starting point for charting a new course. 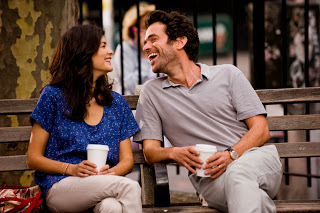 To make effective use of this opportunity, those of us seeking change must take several important steps. First, we must make a concerted effort to choose to be “conscious” about our lives and how they unfold. Willfully opting to remain oblivious won’t change things, so getting onto the conscious creation path truly requires getting serious about doing things with a purposeful sense of awareness.

Second, embracing a more conscious outlook about how life materializes impels us to realize that we’re in the driver’s seat, that we’re directing the show. At the same time, it also requires us to realize that we’re the ones responsible for what transpires. When we embrace the un-conscious approach, it’s easy to abrogate our sense of responsibility. But, when we opt for something a little more engaged, we can no longer turn a blind eye to what we manifest. If we create something, it also means we conceived it, for better or worse, and there’s no escaping who’s responsible for the outcome.

Finally, once we’ve come to the foregoing realizations, it would behoove us to understand that we get the best results when we’re honest with ourselves. Getting a handle on what we really want to create – and then backing up those desires with appropriate manifesting beliefs – bring us that much closer to materializing hoped-for outcomes. This requires us to operate with integrity, being sincere with ourselves and our intents, an approach that may prompt dilemmas and hard choices. But, when we see what we get for such actions, the effort is certainly well worth it. Xavier and his pals need to wise up about this. 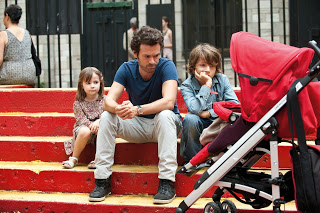 Life in New York is a far cry from life in Paris, as novelist Xavier Rousseau (Romain Duris, center) and his kids, Tom (Pablo Mugnier-Jacob, right) and Mia (Margaux Mansart, left), discover for themselves in “Chinese Puzzle.” Photo courtesy of Cohen Media Group.

“Chinese Puzzle” is a mildly entertaining comedy that, unfortunately, takes its central premise and makes it all a little too obvious. In making its point, the seemingly forced madcap narrative becomes excessive – and eventually tiresome – despite the general likability of the characters and overall story. Unresolved plot threads, the inconsistent use of novel storytelling elements (clever though some of them may be) and the underdevelopment of certain supporting characters take away from what could have been a much more engaging film.

When looking for answers to life’s complexities, we can save a lot of time and effort by first looking to ourselves. The causes – and solutions – don’t lie “out there somewhere” but, rather, within each of us. Being willing to take such a step may require embracing a more responsible approach than we’d like or that we’re used to, but doing so will get us to a satisfactory resolution and a deeper understanding of circumstances more quickly and easily. Indeed, solving the puzzles of our lives need not be difficult as long as we’re willing to figure out how the pieces fit together rather than blaming them for not doing so on their own.