Our everyday existence has many components that we consider essential for our personal growth, if not our very survival. Many times, however, we take these things for granted, giving little thought to them, including why they’ve taken the forms that they have (or that we’ve had a substantial hand in their realization). So, when these creations start to go awry, we’re often befuddled at how they’ve materialized as they have. “Why,” we rhetorically ask ourselves, “have these staples of existence assumed such unsuitable forms?” That’s a heady metaphysical question, one that provides a potent undercurrent in two new documentaries that deal with some of life’s essentials, “Ivory Tower” and “Fed Up.”

Education in America is frequently looked upon as an inalienable right, something to which we’re all entitled to have access, especially since it’s considered central to our development as productive, contributing members of society. At the very least, we assume that we’re entitled to a high school diploma, if not a college degree. That wisdom has occupied a prominent place in our beliefs for decades, too, and, over the years, various public and private programs have been established to further those objectives, noble ventures, to be sure.

However, over roughly the past 35 years, the pursuit of a university education has become an increasingly arduous undertaking, particularly financially. What was once seen as a realistically attainable goal has, in recent years, morphed into a fiscal calamity for many students and their families. Student loan debt, for example, has exploded to the point where graduates often face the prospect of having to pay off their obligations for the rest of their lives, a sort of modern-day form of indentured servitude. 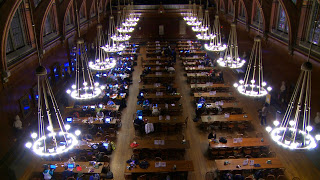 The hallowed halls of Harvard University are one of the featured colleges in the new documentary, “Ivory Tower.” Photo courtesy of Samuel Goldwyn Films.

How did we go from the point where students could pay for their educations by working summer jobs and taking out modest loans to the nightmare of being overwhelmed with debt in near perpetuity? That’s one of the key questions that “Ivory Tower” seeks to address. Through interviews with students, professors, administrators and politicians, coupled with a plethora of statistical data, the filmmakers explore this issue and document the reasons for this debacle, many of which have surprisingly little to do with the actual cost of educating pupils. By focusing on such issues as shelling out huge sums for expensive campus construction programs aimed at luring would-be students (often in an attempt at little more than one-upping competing universities) and paying administrators salaries in excess of what they’re likely worth, the nation’s colleges have unwittingly ballooned tuition and living costs beyond reason. Students, consequently, are saddled with debts they’re likely to have considerable difficulty paying off after graduation (if that even happens), especially since starting salaries have not kept pace with what they owe. In fact, the increasingly dire nature of these circumstances has even prompted a growing number of university candidates to question whether attending college is still worth the investment.

The foregoing concerns thus raise an even bigger question – what exactly do we want out of our educational institutions these days? That’s the issue “Ivory Tower” takes up after addressing the core problem. By examining the educational objectives being pursued by a number of the nation’s colleges – some well known, some not – the filmmakers attempt to examine this question, which has myriad ramifications in terms of what subjects are taught, how those lessons are delivered, what facilities and instructors are necessary for said programs, and what alternatives are possible. With a bloated, overpriced system on the brink of collapse, these are significant considerations that educators seriously need to examine – before it’s too late. 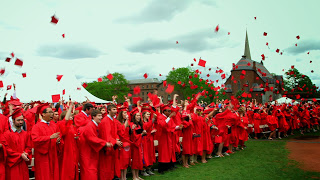 Graduation day should be a time of joy, but, for many debt-burdened students and parents these days, it may be a short-lived joy, as detailed in the new documentary, “Ivory Tower.” Photo courtesy of Samuel Goldwyn Films.

While education may nourish the soul, something that’s even more essential to our sustenance is food, and it, too, is something that has become a problematic staple for us today. That’s the issue explored in “Fed Up.”

How is it that something that’s supposed to sustain us is making us so sick? With childhood obesity at record levels and rates of chronic illnesses like diabetes and heart disease skyrocketing, the food processing industry has come under serious scrutiny as the chief culprit in these problems, particularly for its products that contain added sugar (roughly 80% of the processed food items on the US market today). These problems have been compounded by a medical profession that has clung to outmoded recommendations for combating these conditions, by food manufacturers who skillfully manipulate and entice the tastes of consumers (especially children), often with deceptive marketing campaigns and disingenuous product offerings, and by complicit government agencies and officials that have apparently turned a blind eye to the reality of these issues to appease corporate interests at the expense of public health. 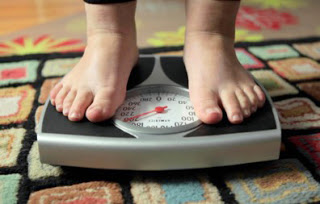 America’s expanding waistline – and the food industry’s role in that phenomenon – provide the focus of the new documentary, “Fed Up.” Photo courtesy of RADiUS-TWC.

Through interviews with public health officials, politicians, medical researchers and consumers afflicted by food-related conditions, the film details how these circumstances arose, how they have been perpetuated, their current and projected future impacts, and the reasons why effective solutions have been thwarted or are hard to come by. The revelations offered up provide considerable food for thought for all consumers.

So how is it that we have arrived at this point with regard to our educational system and food supply? It would be easy to point a finger at the providers of these commodities and cite such considerations as incompetence or greed, and those contentions genuinely have some merit. However, as anyone who practices conscious creation understands, we all have a hand in the unfolding of these scenarios, whether or not we recognize it or are willing to own up to it. Given that we each create our reality through the power of our thoughts, beliefs and intents, we have been participants in the emergence of these circumstances as well, even if only as part of these mass-created events. The big question, in light of that, then, is why?

That “why,” of course, is the $64,000 question. As noted in my previous blog, “‘Grand Seduction’ extols the power of co-creation,” in a collectively created mass event (such as the crises depicted here), we each have our own particular role to play, despite our participation in the larger whole. So, in light of that, the beliefs we contribute to the creation of these circumstances are highly individualized (and thus impossible to generalize to the entire group). However, considering the common attributes that pervade these events, it’s possible to speculate about some of the recurring themes in our collective belief contributions.

For instance, in creating our increasingly fast-paced way of life, we have grown progressively willing to abrogate our responsibility for being directly involved in the manifestation of many of our reality’s components. That interest in expediency may enable us to focus more on our own particular contributions to our existence, but it also leaves us “susceptible” to the impact of the beliefs (and motivations) underlying the creation beliefs of others. If we’re dissatisfied with those elements of our existence, then it behooves us to take back the reins of responsibility and become re-engaged in the process that brought those materializations into being. Placing the blame on others only goes so far if we recognize the role of our own complacency and disengagement in the emergence of such conditions.

In a larger sense, realizations about the manifestation of particular aspects of our existence not only alert us to the materialization of those specific attributes, but they also make us more aware of the part we play in the conscious creation of our wider reality. Indeed, when we become aware that we participate in the creation of a portion of our existence, it also sheds light on the role we occupy in the manifestation of its greater totality. Now, this is not to suggest that we should engage in acts of self-imposed penance or flagellation when it comes to those aspects of our existence that require remediation, but it does imply that taking responsibility to stay involved and attuned is crucial if we seek to create the elements of reality that best suits us.

When adverse or unsatisfactory conditions arise, it’s incumbent upon us to change them, a process that often encourages us to think outside the box. It prompts us to think more creatively, to envision never-tried-before possibilities, to seek resolutions not previously explored. That’s reasonable, too, especially since previously untried probabilities to address once-prevailing priorities were what got us into these circumstances in the first place. But, with those “solutions” having run their course and raised new challenges for remediation, it’s time to move on from them – and doing so using the same process that brought them into being initially.

Both films do capable jobs of probing their respective issues, and they both encourage viewer activism to rectify them. Individually, they also each have their strengths and weaknesses. “Ivory Tower,” for example, effectively details its core issue and offers a range of possible solutions (some of which work, some of which don’t and all of which are examined honestly). However, despite the film’s overall candor, its investigative efforts sometimes feel like they don’t probe deeply enough, that the picture doesn’t go for the jugular as much as it could (or should) have with some of its interview subjects. 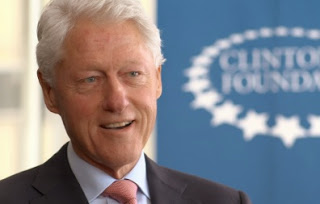 President Bill Clinton, one of a number of featured experts in the new documentary, “Fed Up.” Photo courtesy of RADiUS-TWC.

“Fed Up” is also good at detailing its central problem. In fact, some have even argued that it goes overboard in doing so at times (a contention not without merit), though, personally, I’d rather that a film like this overstate its case than downplay its significance. With that said, however, the picture could be better at proposing solutions; the suggestions offered, though seemingly viable, come too few and far between. This sometimes makes for a film that’s more focused on damning the guilty than encouraging inspired resolution.

Trite though it may seem, it’s often been said that, if you’re not part of the solution, then you’re part of the problem. And, when it comes to the educational system and the food supply, the same applies, as these films illustrate. If we truly want things to be different, we must become involved, both actively and metaphysically, to effect change. In both cases, there’s too much at stake for anyone concerned about them to remain on the sidelines.