‘I Origins’ choreographs the dance of science and spirit

The relationship between science and spirit is an often-precarious one. Each of these metaphysical dance partners tries to lead or sometimes even dominate the steps they take together. But, considering it takes two to tango, they need to collaborate and achieve a proper balance if they’re to work together successfully in creating the reality we experience. That elaborate, intertwined footwork is the subject of an intriguing new science fiction release, “I Origins.”

Many of us believe that “the eyes are the window to the soul.” But, for Dr. Ian Gray (Michael Pitt), a molecular biologist, they’re the key to scientific proof of evolution. The New York City grad student believes that, if it’s possible to conclusively document that contention, it would not only prove the theory, but it would also finally, and definitively, put an end to what he considers the childish, nonsensical notions of the nature of existence put forth by religion and spirituality. In essence, he’s out to disprove the notion of intelligent design, a conclusion that would, for all practical purposes, make God irrelevant.

Ian’s study focuses on eyes, because he believes they’re the piece of the evolutionary puzzle that’s missing to irrefutably prove the theory. He’s fascinated by their unique character and takes countless photos of the irises of innumerable subjects, known and unknown, to further his research. With the aid of two colleagues, first-year research assistant Karen (Brit Marling) and fellow grad student Kenny (Steven Yeun), he diligently pursues his investigation into this singular marker of one’s being. And, despite his obviously passionate obsession with the topic, he nevertheless takes a scrupulously dispassionate approach to his work, summarily eschewing any considerations that are even remotely unscientific.

That all goes out the window, however, when Ian meets a beguiling woman at a Halloween party. They share a brief encounter, including one of his ocular photo sessions, but they quickly part ways. Yet, despite the brevity of this seemingly chance meeting, Ian can’t put her out of his mind, and, before long, they’re reunited through a series of undeniable synchronicities that even he can’t dismiss. Ian subsequently gets to know this mystery woman, a cosmetics model named Sofi (Astrid Bergès-Frisbey), and soon falls in love with her – her fascination with, and faith in, the supernatural notwithstanding.

A New York City billboard is one of many intriguing synchronicities responsible for drawing together separated lovers in the captivating new sci-fi romance, “I Origins.” Photo courtesy of Fox Searchlight Pictures.

Sofi is especially interested in reincarnation. She believes she and Ian have known one another before and will know one another again, their souls being drawn together by the same kinds of synchronicities that fortuitously reunited them in this life. For his part, Ian looks upon Sofi’s ideas as simple and naïve, but, because he cares for her so deeply, he’s willing to humor her. Besides, it’s something he’ll have to get used to, particularly once they’re married.

The marriage, however, never takes place due to a tragic accident. Ian is devastated by Sofi’s loss, but he takes comfort in the arms of Karen, who sees him through his grief. In fact, they eventually fall in love and marry. Through his work and this new relationship, Ian is able to heal, and, seven years later, he becomes a respected expert, a published author and a father-to-be. 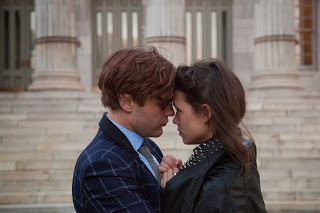 On the surface, life is good – or so it would seem. But, when fond memories of Sofi resurface, a new string of intriguing synchronicities begins to unfold, leading Ian and Karen down a path neither of them could have foreseen. Through a series of captivating twists and turns, Ian embarks on a journey of discovery that takes him from his Connecticut home to a dairy farm in Idaho and a community center in India. These experiences, coupled with unexpected interactions with a high-ranking research scientist (Cara Seymour), a community activist (Archie Panjabi), a missionary businessman (William Mapother) and a young orphan girl (Kashish), spur revelations that hold the potential to radically challenge Ian’s beliefs – and his prevailing worldview.

As any conscious creation practitioner knows, the process is based on the beliefs we draw upon to manifest the reality we experience. Those beliefs form as a result of the input provided by our intellect and intuition, attributes correlative to the disciplines of science and spirit, the primary themes explored in this film. And, as noted earlier, striking a balance between the two is crucial to make the practice work effectively. Indeed, refusing to acknowledge the functioning or existence of either component provides a skewed and often-bewildering impression of how things work.

This is a challenge Ian obviously must come to terms with. His stubborn denial of the spirit world hampers his progress in making use of conscious creation, not to mention his understanding of how his reality comes into being. His resolve is so strong that he’s reluctant to acknowledge the influence of the metaphysical, even when it impacts him directly. He demands extraordinary proof of these concepts before he’ll even consider them. But, thankfully, for his sake, he’s also unwittingly adept at manifesting such proof just when he needs it most.

Sofi plays a key role in helping to make Ian aware of these ideas. She makes a particularly convincing argument when she asserts that all creatures perceive their reality based on whatever sensory capabilities they’ve created for themselves. She observes, for instance, that worms, the subject of one of Ian’s evolution experiments, perceive their world with only two senses, smell and touch. Humans, by contrast, generally assess their existence with the benefit of the five senses we all know. However, Sofi suggests, what if some of us have developed additional sensory capabilities that go beyond the basic five faculties most of us possess? Are such individuals to be dismissed for having a sixth sense? We would never fault the worms for having only two senses, so why should we assume that the five senses we’re familiar with are the maximum we’re capable of materializing? 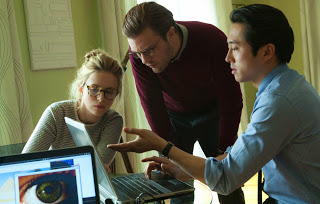 Ian, of course, yet again demands proof of such a contention, but, Sofi counters, how can we produce proof for something that someone with lesser capabilities isn’t even capable of comprehending in the first place? How could a worm, with no eyes, comprehend a concept like light? Yet light, as we all know, is a phenomenon that exists, one we perceive with our sense of sight, and we would never consider denying its existence. The lack of “proof” of an extraordinary sense to someone lacking it, she asserts, doesn’t mean the faculty doesn’t exist; it just can’t be substantiated by conventional means.

To further bolster her metaphysical contentions, Sofi points to the synchronicities that reunited them. She knows that he’s aware of them on some level and that they quietly captivate him. Which is why it also puzzles her that he’s unwilling to embrace them. Their significance has been clearly demonstrated to him, so doesn’t that constitute the kind of “proof” he seeks? Why, she wonders, would scientific proof be considered valid but metaphysical proof isn’t? Is it because metaphysical proof can’t readily be replicated? Or is it another case of just plain stubbornness?

Synchronicities are significant, because they shed light on the inherent connectedness of all things in the Universe. This is an integral component of conscious creation philosophy. But it’s also a key consideration in quantum physics, conscious creation’s scientific cousin. The principle of quantum entanglement, for example, implies an innate connection between anything and everything, and synchronicities lend credence to the validity of this notion. Indeed, if related quantum elements can exist across the span of space (as Ian’s and Sofi’s experience suggests), what’s to say that they also couldn’t exist across the span of time (as Sofi’s reincarnational beliefs propose)? Once again, Ian demands proof of this notion, and, one would think that, as a scientist, he should readily be able to recognize such evidence when it appears. And, if materializing proof of such ideas is so important to him, one can only begin to imagine how amazed he will be if he’s actually able to achieve that. Sofi would undoubtedly take it all in stride, but, for Ian, it would be quite a revelation, to be sure.

After a series of unexpected interactions, such as an encounter with an Indian community center worker (Archie Panjabi, right), molecular biologist Dr. Ian Gray (Michael Pitt, left) is on the verge of an earth-shattering discovery in director Mike Cahill’s “I Origins.” Photo courtesy of Fox Searchlight Pictures.

“I Origins” is an intriguing film that effectively weaves together elements of science fiction and interpersonal relationships, much like Cahill’s previous offering, “Another Earth” (2011). The story is solid and engaging, exploring its heady themes with sublime elegance. Admittedly, the writing is a bit too technical at times, the pacing is a little slow at the outset and some of the picture’s attempts at humor don’t always work. However, the overall narrative is captivating and generally well presented, providing viewers with much to ponder about the nature of existence and what makes it work.

The dance of life – both in its current form and across the ages – is a wondrous creation in all its various permutations. We’d serve ourselves well by enjoying – and embracing – all it has to offer. But, to do that, we must leave ourselves open to all of the metaphysical resources at our disposal. Cutting ourselves off from the elements available to us only harms us in the long run, robbing us of the opportunity to show off what we’re really capable of achieving on that Universal dance floor.