‘Moonlight’ seeks to expose the magic of life

Life would be pretty tedious if everything could be explained in purely rational terms. As valuable as logic and the intellect are, they don’t take into account the mystery of magic and the intuition, elements that add spice and flavor to our lives and the realities we create for ourselves. And forgoing one of those components of existence at the expense of the other can be a painful experience, to be sure. Learning to strike a balance between the two is important to our well-being and happiness as a beleaguered protagonist discovers for himself in the latest offering from director Woody Allen, “Magic in the Moonlight.”

Stanley Crawford (a.k.a. Wei Ling Soo) (Colin Firth) enjoys quite a following as a master magician touring the capitals of 1920s Europe. Ironically, though, for all the seemingly astounding feats he performs on stage before captivated audiences, Stanley is a scrupulously rational man who believes everything can be explained with logic and facts. And, because of his proficiency in magic and his unshakable faith in the power of reason, he has developed a reputation as a leading debunker of the wildly popular spirit mediums of his day, a talent not unlike that of famed contemporary Harry Houdini (1874-1926).

After one of his performances, Stanley is approached by longtime friend, colleague and fellow magician Howard Burkan (Simon McBurney) to investigate the claims of an up-and-coming psychic, Sophie Baker (Emma Stone), who has been retained by wealthy friends to perform séances for them. Howard is concerned that Sophie and her manager mother (Marcia Gay Harden) are out to fleece his friend Grace Catledge (Jacki Weaver) and her son, Brice (Hamish Linklater), who has become quite smitten with the beautiful young spiritualist (and is ready to practically hand over the family fortune to her). However, despite Howard’s doubts, Sophie comes across as so convincing that he believes she just might be the real deal. Stanley remains steadfastly skeptical, though, and he’s confident that he can expose Sophie for the fraud that he believes she is. 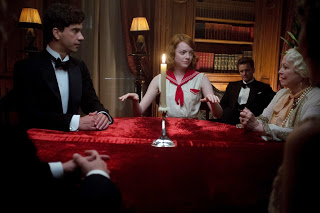 Not long thereafter, Stanley is on his way to the Catledge villa in the south of France to conduct his investigation. He looks forward to the opportunity to unmask yet another con artist. He also welcomes the trip as a chance to visit his favorite aunt, Vanessa (Eileen Atkins), whom he looks upon like a mother figure. But, as much as he relishes this assignment, Stanley may also be taking on more than he bargained for.

Upon his initial meeting with Sophie, Stanley is convinced she’s a fake. However, when she begins making pronouncements concerning matters she couldn’t possibly know anything about, he’s floored. And, when she invokes what appear to be inexplicable miracles during séances, he’s utterly dumbfounded. He’s not sure what to think, especially when he begins succumbing to her charms.

So is Sophie for real, or is she yet another imposter? That’s what Stanley – and the audience – are left to figure out. And, in the process, Stanley just may find his world turned upside down. 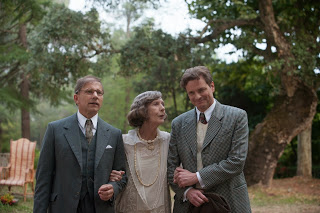 Psychic debunker Stanley Crawford (Colin Firth, right) journeys to the south of France on an assignment at the behest of his colleague, Howard Burkan (Simon McBurney, left), a trip that also gives him an opportunity to visit his beloved Aunt Vanessa (Eileen Atkins, center), in director Woody Allen’s new romantic comedy, “Magic in the Moonlight.” Photo by Jack English © 2014 Gravier Productions, courtesy of Sony Pictures Classics.

In many ways, Stanley is a walking contradiction. He’s such a stickler for all things rational and scientific, yet he practices magic without reservation. Even though he acknowledges that there are logical explanations behind all the tricks of his craft, he nevertheless promotes a belief in the supernatural among his audiences. Yet, at the same time, he unreservedly tells people that they shouldn’t believe in such nonsense. What are people to think?

The conscious creation process requires us to learn how to strike a balance between the influences of science and spirituality, of logic and metaphysics, of reason and magic, of intellect and intuition. In his own way, Stanley seems to understand both, but he dismisses the magical out of hand, despite his on-stage efforts at promoting it. He’s so confident that rationality reigns supreme – and that his belief in it is inherently superior to other ways of thought – that he never considers what might happen if those alternative viewpoints appear to have any credibility.

So why does he so stubbornly hold onto this view? Perhaps it’s because he’s such a hard-nosed control freak, believing that everything can be understood with certainty and logic. But, when his beliefs get shaken, he suddenly feels less in control, uncertain of what’s really transpiring in his world. His discernment abilities are clearly being tested. 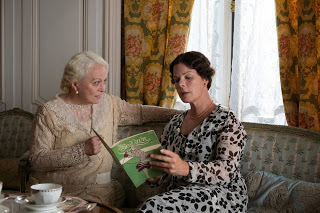 Sophie’s presence in Stanley’s life is designed to stir the pot of his beliefs, and, on some level, he must have wanted that; otherwise, he wouldn’t have drawn her into his reality. The same can be said of Aunt Vanessa, who has long tried to convince Stanley that we should embrace the magic in our lives, for it often brings us joy greater than we can imagine. But will Stanley recognize what these influences have to offer? It all depends on what he’s willing to believe.

As conscious creators know, there’s a place for both intellect and intuition. We just need to know which to draw upon and when, again spotlighting the importance of discernment. This is not to suggest that we should automatically buy into the phony claims of charlatans, but it also means that we shouldn’t reject magic out of hand just because it doesn’t comport with the strict regimens of logic. (Pay attention, Stanley.)

“Magic in the Moonlight” is a modestly amusing, though not especially stellar, offering from Woody Allen. The picture could have benefited from better lead performances (Firth is too bombastic, while Stone often sleepwalks through her role). Even more surprising, however, is the inconsistent writing. The film starts out crisp but fizzles as the story unfolds, especially in the meandering final 30 minutes. The narrative also rehashes story elements found in some of Allen’s earlier films, such as “You Will Meet a Tall Dark Stranger” (2010), “Shadows and Fog” (1991) and “The Curse of the Jade Scorpion” (2001). A fine supporting cast (particularly Weaver, Atkins, McBurney and Linklater), gorgeous cinematography and terrific period piece production values help to shore up these shortcomings, making for a visually appealing and mildly entertaining, though not especially memorable, time at the movies. 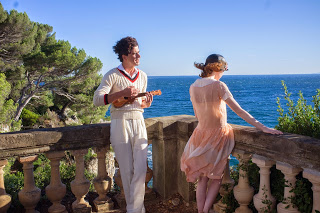 Just as the intellect gives us a rational basis for our existence, the brilliance of sunlight illuminates all we see and gives life to our world. But, as crucial as this is, we also need the magic and mystery of the intuition – the illumination metaphorically afforded by the moonlight – to give life character and, ultimately, make it worth living. May we all have the wisdom to recognize and embrace both the sun’s rays and the moonbeams that come our way to make our existence truly magical.