‘The Giver’ probes the essence of human nature

Like an enormous dam holding back a huge reservoir, efforts aimed at intentionally quashing the essence of human nature pose quite a challenge for those seeking to implement them. And, should the occasion arise when those metaphorical floodgates need to be opened, those in charge of monitoring those relief mechanisms had better be prepared for what flows through them. The consequences of mishandling such an important task could be devastating for those seeking to maintain control. But, then, perhaps control isn’t all it’s cracked up to be, a notion capably explored in the new sci-fi adventure, “The Giver,” based on the best-selling young adult novel by author Lois Lowry.

Life in “the Community,” a pristine, well-mannered society of the future, seems like a utopian enclave. But, as quickly becomes apparent, looks can be deceiving. While political, social and economic problems like war, famine and poverty have been eradicated – systematically dispensed with in the wake of “the Ruin” – those benefits come with a cost:

• Everyone’s behavior is rigidly controlled, and their actions are tightly monitored, with Community residents receiving daily drug injections to ensure tranquility and cooperation – not to mention quietly coerced compliance.

• Nearly all decisions – both big and small – are handled by a Council of Elders, with major pronouncements delivered with ostensibly convincing sincerity by the Community’s Chief Elder (Meryl Streep).

• Even though family units resemble the traditional model, their makeup is determined by considerations other than biology – or even basic emotional bonds.

• Each resident’s calling in life is predetermined, with lifetime vocational assignments doled out upon turning age 18. Community members retain these assignments until retirement, when they are quietly relocated to a new life in “Elsewhere.”

Seems like paradise, right? Community members apparently believe so. But that’s all about to change with the coming of age of a gifted young man named Jonas (Brenton Thwaites).

During a ceremony in which lifetime work assignments are handed out, Jonas learns that he has been given a special designation, “the Receiver of Memories.” Unlike his peers, who are assigned comparatively mundane tasks like groundskeeper and child nurturer, Jonas is given this charge because of his unique capabilities, most notably his gift of second sight, an ability to see beyond the ordinary and accepted aspects of daily life. He’s chosen for this task because only one who possesses such qualities is deemed worthy of such a challenging – and potentially dangerous – assignment.

When Jonas begins his training, he’s assigned to work with the current holder of memories. And, since Jonas is to become the Receiver of such information, the one charged with imparting it to him is known simply as “the Giver” (Jeff Bridges), an aging mentor who is all too familiar with the arduous responsibility Jonas is about to assume. 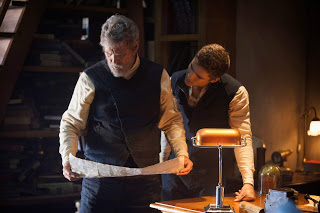 Jonas (Brenton Thwaites, right), the newly appointed Receiver of Memories for a future society known as the Community, learns the ropes from an aging mentor simply known as the Giver (Jeff Bridges, left) in the new sci-fi adventure, “The Giver.” Photo courtesy of The Weinstein Co.

In the course of his training, Jonas learns many things previously unknown to him (or to any of his peers for that matter). As the Receiver of Memories, he’s exposed to knowledge of all the aforementioned ills that have been purged from Community life and consciousness. But, at the same time, he also discovers the many joys that have been expunged from the residents’ awareness. Beneficial and uplifting concepts that we take for granted, like love and happiness, are totally foreign to Jonas and his peers. What’s more, Jonas is strictly forbidden from sharing these ideas with them; his knowledge is only to be used for “consultations” with the Elders when they need memory-related advice for solving problems. But, thanks to the aid of the Giver, Jonas and his fellow residents are about to embark on an odyssey filled with remarkable revelations.

Of course, there are tremendous risks in what Jonas is about to undertake. The Giver is well aware of this, too, especially in light of his unfortunate experience with a previous Receiver (Taylor Swift), who struggled with the power of such knowledge and its attendant ramifications. On top of this, those interested in protecting the status quo frown upon the dissemination of such radical ideas, and they’re willing to take whatever steps are necessary to preserve their way of life. They even try turning Jonas’s friends (Odeya Rush, Cameron Monaghan) and family (Alexander Skarsgård, Katie Holmes, Emily Tremblay) against him to get him to abandon his plans. But, considering the risks – and rewards – involved, Jonas forges ahead, despite a highly uncertain future. 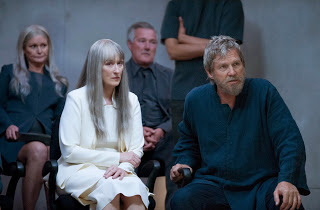 The quietly coercive Chief Elder (Meryl Streep, foreground, left) of a future society known as the Community tries to thwart plans for reform initiated by the aging Receiver of Memories, a.k.a. the Giver (Jeff Bridges, foreground, right) in director Phillip Noyce’s “The Giver.” Photo by David Bloomer, courtesy of The Weinstein Co.

Those well-versed in conscious creation, the means by which we create the reality we experience, understand that our beliefs determine what unfolds before us. The nature of those beliefs, in turn, depends on the input afforded them by our intellect and intuition. Both are essential to make the process work effectively. And that’s where the Community’s founders got themselves, the residents and their progeny into trouble.

Given the virtual absence of emotion and feeling – hallmarks of the intuitive side of the belief equation – in the Community, it’s obvious that those who established the foundations of this new society did so on the basis of logic and reason, key indicia of the intellect. Now, there’s nothing inherently wrong with the intellect, but relying upon it exclusively to determine the nature of one’s beliefs (and everything that stems from them) is a recipe for disaster (especially when employed on a scale as wide as that of an entire population). It stifles creativity and even hampers the functioning of everyday skills, like basic problem-solving (as is apparent from the Elders’ need to have someone with the Receiver’s knowledge on hand to begin with). And, should glimmers of awareness of these “volatile” concepts begin to emerge, those who try to squelch them have no idea what they’re up against.

So why are the Elders so preoccupied with stifling such “radical” notions? They sincerely believe that the fallout from the Ruin was so intolerable that they must take all necessary steps to prevent its recurrence. The cure for that, in their estimation, is to rein in the causes that prompted it, most notably the power of choice. The Elders have successfully convinced themselves that this fundamental human birthright is the root of all of the ills that gave rise to the Ruin and that it must be contained at all costs. Choice, they surmise, leads to differences, which lead to comparison, which then lead to jealousy, envy and greed, qualities that ultimately brought down the world of before. So, by eliminating the source of the problem, they maintain, the problem is itself eradicated. Or so they think. Indeed, as the Chief Elder ardently observes (and sincerely believes), “When people have the freedom to choose, they choose wrong.” 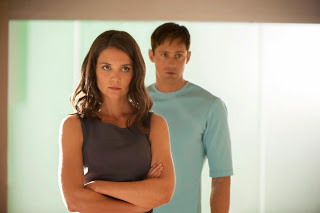 As parents of a gifted young man, a concerned Mother (Katie Holmes, left) and Father (Alexander Skarsgård, right) grow worried when their son embarks on what appear to be socially unacceptable plans in the young adult sci-fi adventure, “The Giver.” Photo courtesy of The Weinstein Co.

In light of human history, some would contend that a good argument could be made for the Chief Elder’s outlook. However, eliminating choice carries other consequences. It stifles such natural human tendencies as the need and desire to create, to evolve, to overcome limitations and to pursue our intrinsic constant state of becoming. By removing such abilities from our manifestation toolbox, we leave ourselves open to being unprepared for the challenges we face, some of which could have implications tied to the nature of our humanity – and possibly even our very survival.

It’s futile to think these innate stirrings can be suppressed indefinitely. As has been demonstrated previously through the experiences of the inhabitants of other would-be utopias, such as those portrayed in films like “Brave New World” (1998), “Logan’s Run” (1976), “THX 1138” (1971) and even “TRON: Legacy” (2010), the denial of our inherent nature as beings whose fundamental purpose is to live to create is destined to fail. That can be a difficult lesson for those who would attempt to thwart us in the pursuit of our basic human mission, but it’s one that must come to pass for those who try to block its fulfillment. 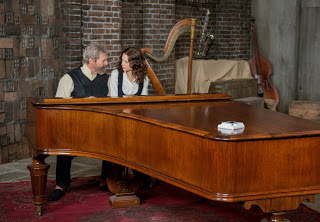 Haunted by the painful memories of a previous protégé (Taylor Swift, right) unprepared for her responsibilities, the aging Receiver of Memories (Jeff Bridges, left) recalls a happier time in their ill-fated relationship in the movie adaptation of author Lois Lowry’s “The Giver.” Photo courtesy of The Weinstein Co.

The young adult dystopian future movie genre has been somewhat overworked in recent years with the release of such pictures as “The Hunger Games” films (2012, 2013) and “Divergent” (2014), among others, but “The Giver” nevertheless does a respectable job of delivering the goods. Its inventive cinematography, offering a carefully crafted mix of black-and-white and color photography reminiscent of the techniques used in “Pleasantville” (1998), lends a poetic touch to the narrative (especially in its duotone depiction of the Community, a world where virtually everything is metaphorically seen in black and white). Capable acting and an emotive background score complement the imagery well.

With that said, however, the film’s writing leaves much to be desired at times. Some sequences go on too long, others are underexplained and some are wholly improbable, even with a healthy stretch of the imagination. A half-hearted attempt at incorporating a love story between Jonas and his friend Fiona (Rush) comes up short, too. But, even with these failings, the picture still provides ample fodder for contemplation and discussion, especially for those who are new to the metaphysical concepts explored here, the young adult audience at which this film (and its source material) are targeted. 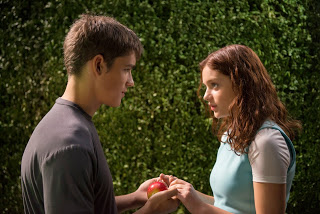 With the intention of creating a better life for his friend Fiona (Odeya Rush, right), Jonas, the newly appointed Receiver of Memories (Brenton Thwaites, left), prepares to embark on a perilous personal journey in “The Giver.” Photo courtesy of The Weinstein Co.

In an age when so many of us have been so willing to surrender so much for the sake of comfort and security, “The Giver” should serve as a cautionary tale about what we stand to lose if we give away too much. It’s likely that those losses ultimately won’t endure, given the power of human nature, but recapturing what we willingly forfeit may be a major hurdle to surmount. So, in light of that, we should keep a finger on the button to those aforementioned floodgates – just in case we need it.