To many of us, the resolution of certain types of situations may seem obvious. But are they really? Some might contend that such views are overly simplistic, that multiple impressions – and outcomes – are possible. This is especially true in courtroom settings, where the advocates for each side present compelling arguments for their clients. How everything shakes out depends on who makes the better case, a result that’s based (at least in part) on the beliefs employed in interpreting those contentions. That’s the scenario that unfolds in the engaging new Israeli drama, “Gett: The Trial of Viviane Amsalem.”

Viviane Amsalem (Ronit Elkabetz) no longer loves her husband, Elisha (Simon Abkarian), and wants a divorce. There’s just one hitch – she’s unlikely to receive it. As a citizen of Israel, where civil marriage and divorce don’t exist, Viviane can dissolve her union only with the approval of an orthodox rabbinical tribunal and her spouse’s consent. And, under such a male-dominated paradigm, circumstances are nearly always stacked against women; the chances of Viviane receiving her divorce (a gett) depend heavily on what the men want. 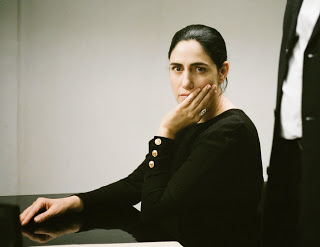 Ronit Elkabetz co-wrote, co-directed and plays the title role in “Gett: The Trial of Viviane Amsalem,” the saga of an Israeli woman who endures a painfully protracted proceeding to seek a divorce from her husband before a rabbinical tribunal. Photo courtesy of Music Box Films.

Viviane’s case is particularly problematic, because Elisha refuses to grant her request. As a devoutly religious man, he’s committed to upholding tradition, preserving the supposed sanctity of his marriage at all costs, despite an obvious attitude of indifference toward his wife. The burden thus falls on Viviane to establish why she should receive her gett.

To make her case, Viviane offers some fairly simple reasoning: She’s not in love with Elisha, and it sounds like she never really was, having been more or less coerced into the arrangement. In spite of these circumstances, she nevertheless devoted years to her commitment as a dutiful wife and mother. But, after putting up with that situation for so long, she’s now ready to move on with her life – provided her husband will agree to it.

While conducting the divorce proceeding, the rabbis (Eli Gornstein, Rami Danon, Roberto Pollak) ask Viviane if Elisha has ever been abusive or unfaithful or if he has ever failed to provide for her, grounds for which a divorce would readily be granted. Viviane freely admits that these considerations have never been issues but that she still wants her gett. The rabbis, in response, are dumbfounded – why would a woman willingly want to give up such “stability”? They thus side with Elisha.

Elisha (Simon Abkarian, right), an intractable, quietly vindictive spouse, refuses to grant a divorce to his wife, Viviane (Ronit Elkabetz, left), despite her best efforts and the fervent advocacy of her attorney, Carmel (Menashe Noy, center), in “Gett: The Trial of Viviane Amsalem.” Photo courtesy of Music Box Films.

But Viviane and her attorney, Carmel Ben Tovim (Menashe Noy), press their case, asking, “Why would a man want to stay stuck in a marriage with no love, passion or hope for the future?” Elisha’s response is, “because he can”; if he can no longer have a functioning relationship with his wife, at least he can take “comfort” in the notion that no one else will, either. Vindictiveness thus becomes the reasoning behind Elisha’s refusal, a decision that remains unchanged every time he’s asked.

Despite Elisha’s unwillingness to grant the divorce, Viviane appeals the decision, setting in motion a lengthy process through which family members, friends and neighbors offer their impressions of the relationship to the tribunal. During such testimony, the witnesses present their views of the marriage in response to an array of queries from the rabbis, Carmel, and Elisha’s advocate, Rabbi Shimon (Sasson Gabai). The inquisitors rely on these responses – which range from the sublime to the utterly ridiculous – to qualify the character of the marriage to determine whether Viviane’s divorce request is warranted. In doing so, Carmel makes an impassioned plea for common sense, while Shimon repeatedly and ludicrously suggests that there must be something wrong with Viviane for wanting to give up such an allegedly good deal.

After years of contentious courtroom proceedings and legal maneuverings, the embattled couple struggles to seek resolution. Will Viviane’s request finally be granted? Or will the couple stay perpetually stuck in limbo? With the institution of marriage and the integrity of personal character on trial, it remains to be seen which viewpoint will ultimately prevail. 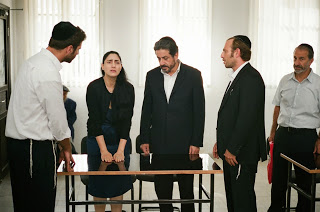 In examining this situation, one of the questions that arises is, “Why does everyone involved hold such differing views of the circumstances?” The answer, quite simply, lies in the nature of conscious creation, the philosophy that maintains we each manifest our own existence through the power of our thoughts, beliefs and intents. And, in this case, everything depends on each party’s fundamental beliefs and how they apply them in the creation of their respective realities.

To Viviane, divorce is the only logical course, since there’s seemingly no point in continuing the marriage. In her view, the relationship has outlived whatever usefulness it might have had, and it’s time to move on. She’s now seeking to materialize a reality commensurate with such beliefs.

For Elisha, however, maintaining a traditional Jewish marriage and household is paramount above all else, and he can’t fathom why Viviane won’t cooperate in that endeavor (especially in light of her onetime agreement to it and despite his personal indifference toward her). He sees divorce as anathema to the pursuit of this venture, so he can’t possibly agree to her request. And, to maintain that posture, he justifies his stance by drawing upon one of his most potent creations – the force of law – to galvanize his convictions and what springs forth from them.

As for everyone else involved, their views of these circumstances fall in line with their beliefs, too. Viviane’s attorney and witnesses, for example, hold opinions that support her thinking, while Elisha’s witnesses, his advocate and, to a certain extent, the rabbis side with his views. Since these individuals routinely apply their respective beliefs in the materialization of their realities, it’s only natural that they would do the same in viewing the character of the couple’s marriage. In essence, they employ the same metaphysical lenses and filters to both situations.

The diverse yet uniform character of these individuals’ manifestations – both inside and outside of the courtroom – suggest that these creations are products of their originators’ core beliefs, the intents that underlie most, if not all, of their respective materializations. Such beliefs, in turn, provide the basis of their prevailing perspectives, the overarching outlooks they hold, which all end up getting put on trial during these proceedings. Some of these perspectives are heartbreaking, as evidenced by Viviane’s emotional testimony. Some are indifferent, as is apparent in Elisha’s attitude toward Viviane. Others are impassioned, as seen in Carmel’s fervent advocacy. And others still are utterly laughable, as seen in Shimon’s often-absurd line of questioning. But, no matter what perspectives they adhere to, they’re all ultimately based on the core beliefs that spawn them. 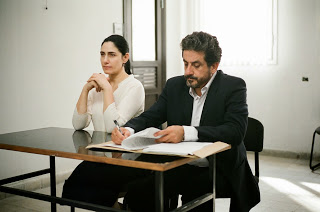 As divergent as these perspectives are, however, they’re all part of the overall drama playing out here. They each feed into the creation of a mass event, the product of our collective consciousnesses joining forces to materialize a larger, multifaceted phenomenon. The manifestation of an event like this affords an opportunity to examine all of its component perspectives, thereby allowing assessments of the merits and drawbacks of each. Those who participate in such a scenario thus become champions for their respective causes and perspectives, something that accounts for the diverse range of events and emotions that emerge from it, which, in this case, spans a range encompassing everything from the heartfelt to the circus-like.

Given Viviane’s ordeal, one might wonder why she’s chosen to put herself through it. Yet, as a champion for her cause – both personally and for others similarly situated – it could be argued that she needed to create these circumstances as a means to draw attention to the issue. Indeed, to address what some would see as an inherent gender bias in Israeli divorce proceedings, advocates for amending the process must first expose and spotlight this inequity if a movement aimed at changing it is ever to gain a foothold. And, for a nation that claims to aspire to democratic principles, one could easily make a case that such reform is needed.

But, with that said, Viviane clearly faces an uphill battle, given that her opponents – Elisha, Shimon and even the tribunal itself – are equally ardent champions of their cause, the maintenance of the status quo. As anachronistic as their views may seem to some, they nonetheless firmly believe in the perpetuation of tradition. And, because conscious creation maintains that all lines of probability are equally viable, they believe they have a valid case. Whether they succeed, though, depends on how committed they are to their beliefs – and how well the opposition’s intents counter their contentions. In the end, though, as with any type of manifestation, it will all come down to which beliefs prevail.

“Gett” is an absorbing drama, if a bit stagey at times (not entirely unexpected, though, given the courtroom setting of the story). Elkabetz gives a riveting performance, displaying a range of emotions reflective of the many moods that make up the narrative. The picture’s excellent script does a fine job of presenting different sides of the same story, effectively demonstrating how the circumstances of a situation may not always be as cut and dried as we might like to think they are. This affords viewers an opportunity to see how beliefs and perspectives allow a “single” scenario to be interpreted in multiple ways, something we should bear in mind when faced with having to make up our own minds under comparable circumstances. The film, a Golden Globe nominee for best foreign language film, is primarily playing at theaters specializing in foreign and independent cinema.

Situations whose character might seem self-evident at first glance can quickly become muddled when confronted with the slippery slope of perspective. Under such circumstances, different outlooks may emerge. We may become ever more convinced of our position. Or we could inexplicably find ourselves changing our minds. Or we might wind up perplexed, unsure what to believe. But, no matter what happens, we must always remember that our viewpoints stem from us, from the beliefs we hold and the perspectives we maintain. And, once we remind ourselves of that, we may find that it’s just what we need to see our way clear.