The impact of an idea can be considerable. When that notion is infused with the energy of a mass collaboration, it can become huge. And, when that initiative is linked with others of like tenor, a movement is born. So it was when the women of America united to get behind a cause that liberated them from the shackles of stifling limitation, a culture-changing crusade that reshaped society forever, the subject of the engaging new documentary, “She’s Beautiful When She’s Angry.”

In 1963, author Betty Friedan set off a social and cultural firestorm with the release of her immensely popular book, The Feminine Mystique, which revealed that a sizable number of American women were dissatisfied with the limitations of their roles as wives and mothers. That literary spark, in turn, gave rise to what would become one of the most influential social crusades in the nation’s history – the women’s liberation movement.

The dissatisfaction Friedan chronicled went beyond the aforementioned role limitations, however. Once word of these sentiments began to spread, women started expressing their discontent with the way their gender was being treated (or ignored) on a variety of fronts, all of which quickly fed into the blossoming of a multifaceted social crusade.

Chief among the movement’s initiatives was the push for equal pay and job opportunities. Many women had grown tired of being relegated to the domestic arena and began seeking change. But things didn’t stop with these economic and vocational initiatives; campaigns aimed at securing equal rights of all kinds were subsequently launched. 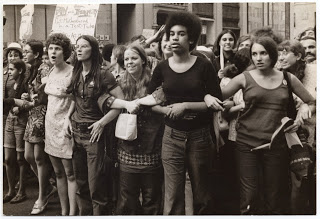 Protestors gather to participate in the August 26, 1970 Women’s Strike march, one of the principal events of the women’s liberation movement depicted in the excellent new documentary, “She’s Beautiful When She’s Angry.” Photo by Diana Davies, courtesy of International Film Circuit, Inc.

This new focus of the crusade was an outgrowth of the era’s civil rights movement, which had benefited tremendously from the participation of many formidable, strong-minded women, some of whom encountered gender-based discrimination of their own at the hands of their male counterparts. The indignation that these and other women experienced helped fuel their passion for feminist initiatives. It inspired organizers to rally and amass ranks of followers. And, with the rise of nonviolent public protests over issues like voting rights and the Vietnam War, women now had a model to draw upon to make their platform known – and their voices heard.

The other causes the crusade took on covered a wide range of topics, including the needs of minority women (particularly in the African-American, Latina and Lesbian communities), support for rape victims and women coerced into forced servitude, better funding for women’s health research and education, reproductive rights advocacy (especially in the areas of legalized abortion and access to contraceptives), increased child care availability, and political activism (including such areas as equitable representation in office and passage of the Equal Rights Amendment). This agenda made for a very full plate, but it was one that women in the movement eagerly pursued with vigor. 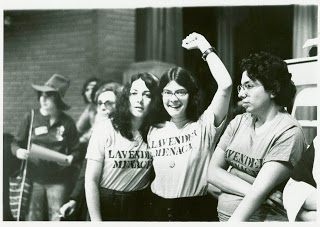 Members of the Lavender Menace, an organization devoted to addressing the needs of the Lesbian community of the women’s liberation movement, made their voices heard through provocative, innovative tactics, as detailed in director Mary Dore’s “She’s Beautiful When She’s Angry.” Photo by Diana Davies, courtesy of International Film Circuit, Inc.

Urban centers became significant hubs for activism, especially in cities like Boston, New York, Washington, Chicago, San Francisco and Berkeley. A number of advocate groups sprang up, such as the National Organization for Women, and their members became experts at networking and recruiting huge numbers of followers (a pretty amazing accomplishment, given that there was no Internet at the time). Public events also became important, such as the 1970 Women’s Strike, which attracted throngs of participants to raise public consciousness about the movement’s issues.

As successful as these conventional measures were, however, an array of innovative tactics were employed, too. A number of high-profile initiatives aimed at taking on bastions of the old order (and generating significant media coverage) were organized, such as protests at the Miss America pageant, a sit-in at the offices of the Ladies Home Journal, public bra burnings and performances of an all-female activist rock band (an innovation for the time). Many women used humor to make their points, too, as evidenced by the emergence of protest groups like the Women’s International Terrorist Conspiracy from Hell (W.I.T.C.H.), an organization whose followers intentionally dressed like the namesake of their group’s acronym to taunt those who openly mischaracterized the liberation movement. Given the effectiveness of these efforts, those who condescendingly criticized the crusade (nearly always men) opened their mouths at their peril. 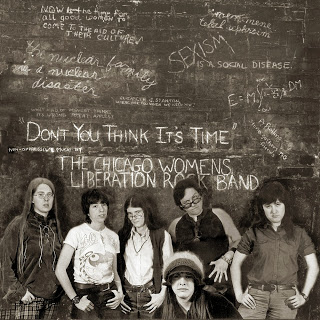 Performances by the Chicago Women’s Liberation Rock Band, one of the first all-female rock acts, captured the attention of more than just curiosity seekers and supporters of the cause during the rise of the women’s rights movement, as seen in director Mary Dore’s engaging new documentary, “She’s Beautiful When She’s Angry.” Photo by Virginia Blaisdell, courtesy of International Film Circuit, Inc.

Despite the movement’s many successes, it was not without its challenges, either, some of which came from within as well as from without. For instance, minority women sometimes questioned whether their interests were being adequately represented within the movement, given that many of its leaders and members came from more mainstream economic, social and ethnic backgrounds. Then there was the question of radicalism, which prompted many women to wrestle with the question of “How far is too far?” For example, suggestions put forth by radical Lesbians that all women should abandon the heterosexual lifestyle and willingly embrace their “innate” gay nature didn’t go over well with many of the movement’s more conservative members, who were eager to fight for equal rights but not anxious to be coerced into a change in their sexual orientation. Women who were mothers were similarly chastised at times, their critics contending that children bound them to a more traditional, “unliberated” way of life. When such issues became public knowledge, they sometimes discouraged women who were on the fence about getting involved, especially when word of them was gleefully spread by chauvinists in the backlash movement seeking to discredit and stymie the crusade. But, as the movement progressed, solutions to these challenges gradually emerged, allowing them to be addressed in their own time and on their own terms.

The impact the women’s liberation movement had on society was substantial, to say the least. The gains made between 1966 and 1973, the principal period covered in the film, changed the country in profound ways, something that becomes particularly apparent in film clips depicting American culture before the rise of the crusade. And, while it may be tempting to think that there’s no going back in the wake of these many accomplishments, the picture nevertheless makes it clear that there’s work yet to be done, especially in the area of protecting reproductive rights in battleground states like Texas. But, if contemporary women rise to the challenge in the same way their predecessors did, their opponents have cause for concern.

The movement’s achievements also make apparent its constituents’ proficiency as practitioners of conscious creation, the philosophy that maintains we each manifest our reality through the power of our thoughts, beliefs and intents. As evidenced in the film, the power inherent in their impassioned beliefs is considerable. Indeed, such potent convictions aptly illustrate the contention of conscious creation author and advocate Jane Roberts that there’s more power in a focused intent than is required to send a rocket to the moon. They also depict what’s attainable when we employ the ability to envision desired outcomes, a notion espoused in The Lost Mode of Prayer by author Gregg Braden, who asserts that it’s entirely possible to reach our goals when we act as if the hoped-for results have already occurred. The visionaries who launched the women’s liberation movement obviously had these elements going for them, and the outcomes speak for themselves. 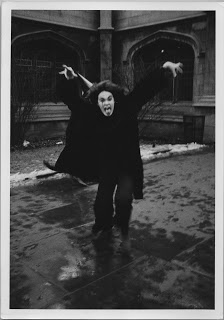 Members of W.I.T.C.H. (the Women’s International Terrorist Conspiracy from Hell), an organization whose followers intentionally dressed like the namesake of their group’s acronym to taunt those who openly mischaracterized the liberation movement, caused a humorous stir during the emergence of the women’s liberation movement, as chronicled in “She’s Beautiful When She’s Angry.” Photo by Jo Freeman, courtesy of International Film Circuit, Inc.

Of course, much of the success behind these efforts stems from the numbers who got behind them. The women’s liberation movement is a prime example of a consciously created mass event carried out with confidence and determination. The fusion of multiple consciousnesses working together can yield unfathomable rewards, and this crusade illustrates this idea as well as any that society has ever witnessed. The movement’s capacity for invoking sweeping change on a mass scale is undeniable, and, if anyone were to doubt that, one need only look at some the picture’s archive footage depictions of once-commonplace attitudes and social conventions that would never be tolerated today.

The movement’s accomplishments also demonstrate how it’s possible for change to arise at the grass-roots level. Many of the milestones attained through these initiatives were launched by women who came from modest, everyday backgrounds. Their names aren’t household words by any means, but they had impact nonetheless. They saw needs, envisioned solutions and formed beliefs to bring them into being. So it was, for example, for abortion rights advocates Judith Arcana and Heather Booth, who helped women gain access to safe procedures in the days before the landmark Supreme Court decision in Roe v. Wade. The same was true for those who advocated for the needs of women of color, including Fran Beal, Linda Burnham and Eleanor Holmes Norton, who was eventually elected to Congress. And then there were the authors of Our Bodies, Ourselves, who collectively compiled this quintessential work on women’s health and sexuality at a time when no comparable work existed. These remarkable women are just a few of the many liberation pioneers who are profiled in the film, and, even though they may not possess the same notoriety as movement luminaries like Bella Abzug, Shirley Chisholm, Betty Friedan and Gloria Steinem (all of whom are depicted in archive footage), their contributions – and creations – are no less significant.

“She’s Beautiful When She’s Angry” is an excellent, capably packaged documentary that covers its subject thoroughly, tautly and poignantly, with a style that’s both informative and refreshingly humorous. Director Mary Dore has skillfully blended a mix of contemporary interview segments and archival footage, creating a finished product that’s both enlightening and entertaining. The film is playing primarily at venues specializing in independent and documentary cinema, with theater listings posted on the picture’s official web site.

When a great idea is blessed with recognition and acceptance, there’s no telling what it can yield. The women’s liberation movement is an example of one of those grand notions, one whose impact has spread far and wide, spanning the globe and even crossing gender lines, amassing support beyond the boundaries of its core constituency. Such success is a fitting tribute to those who gave life to it, and “She’s Beautiful When She’s Angry” effectively echoes those sentiments, providing viewers with a meticulous chronicle that fondly yet objectively recognizes the efforts of those who freely gave so much to benefit so many.