‘Power of the Heart’ plumbs the capabilities of a remarkable resource

When we speak of something having “heart” or of the need to “follow our heart,” what exactly does that mean? For many of us, such expressions seem warm and inviting but are, nevertheless, understandably vague. However, in the recently released DVD and companion book “The Power of the Heart,” director Drew Heriot and writer Baptist de Pape help to eliminate much of the confusion surrounding this often-nebulous topic, offering clear, concise answers applicable in both practical and philosophical contexts.

As he did in his previous work, the immensely popular DVD “The Secret” (2006), director Heriot presents a series of engaging monologues on the subject at hand, discussing it from metaphysical, spiritual and even scientific perspectives. These insights are then intercut with a series of fictional vignettes and re-creations of true stories that illustrate these principles at work in a wide range of applications, covering such diverse concepts as the role the heart plays in intuition, synchronicities, forgiveness, friendship and love. Discussing these notions are a host of new thought leaders, including Deepak Chopra, Neale Donald Walsch, Eckhart Tolle, Paulo Coelho, Marci Shimoff, Gary Zukav, Marianne Williamson, Mark Nepo, Isabel Allende, Michael Beckwith, John Gray, Rollin McCraty, Jane Goodall and the late Maya Angelou. 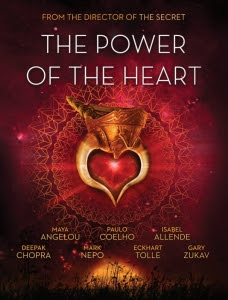 Through the film’s various segments, viewers learn about the remarkable capabilities of that tremendously powerful little muscle that resides within each of us. However, as the picture reveals, its truly amazing faculties might be far greater and more significant than any of us generally realize.

For instance, in one of the film’s most intriguing sequences, researcher Rollin McCraty discusses an experiment conducted to measure the heart’s response to various forms of visual stimuli. In the course of that study, McCraty found that physiological indicators can show responses to such stimuli before a subject actually sees them. The implication of this is that the heart would seem to possess some type of intuitional capability that exists outside of what we think of as “normal” time and space parameters.

Awareness of this capability carries tremendous ramifications. For starters, it would lend credence to the very existence of intuition, something many of us tend to summarily dismiss as purely theoretical at best, irrational wishful thinking at worst. Beyond that, however, it also suggests an inherent and immensely beneficial practicality, one that could potentially help us to be alert to – and perhaps even avoid – difficult or devastating situations, perhaps even providing us with an understanding of the mechanism behind the “fight or flight” response. It could even aid in our application of the conscious creation process, the means by which we create our reality through our thoughts, beliefs and intents, elements that are significantly shaped by the input of our intellect and intuition. Indeed, the possibility of becoming a more proficient conscious creator as a consequence of this is, in itself, a wholly worthwhile prospect.

This sort of intuitional awareness also makes us more cognizant of the role that synchronicities play in conscious creation. These so-called “meaningful coincidences” provide us with valuable insights about how to proceed with our endeavors, in essence giving ourselves clues about what to do. Those who recognize the importance of such correlations often refer to them as “gut feelings” or “gut instincts.” But, in light of the results of this research, perhaps we would be better terming them “heart feelings” or “heart instincts,” giving credit where it really is due.

Needless to say, numerous conscious creation applications have the potential to be substantially affected by these revelations. John Gray, for instance, discusses the implications for romantic relationships, particularly when one’s heart synchronizes with that of a significant other. Similarly, those launching new business ventures or creative undertakings may find themselves particularly well suited when they tap into the power of these considerations, as several individual testimonials indicate.

The gifts of the heart are among its most important attributes. The heart’s capacities for generosity and forgiveness, for example, are especially noteworthy, as illustrated through the re-creations of two true stories. In one, the parents of a young woman killed in a tragic accident comply with their daughter’s organ donation wishes, making her heart available to an older woman in need of a transplant. By following their hearts to see their daughter’s wish fulfilled, they allow the generosity of the heart to come pouring forth, an act that is subsequently returned to them many times over when they become friends with the recipient of this treasured gift.

In the second story, Immaculée Ilibagiza (Jamie Ann Burke), a survivor of the Rwandan civil war who lost most of her family during that insane genocide, tells how she managed to outlast the horrors of the struggle. While in hiding during the conflict, she experienced profound personal revelations that helped her cope with the prolonged and ghastly conditions of her circumstances. Most notably, she learned how to tap into the heart’s power of forgiveness, something many of us might find difficult to fathom given what happened. However, by being able to follow the admonition “to forgive those who trespass against us,” as noted in the Lord’s Prayer, and absolve those who committed atrocities against her and her family, Immaculée was able to free herself from the emotional shackles that might have potentially kept her a prisoner of her own pent-up feelings for the rest of her life. It also enabled her to share her experience with the world, providing an example for all of us to draw from when faced with our own forgiveness challenges to overcome. 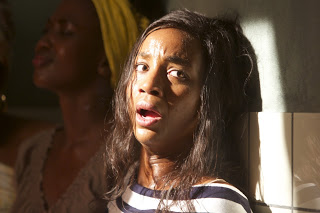 Immaculée Ilibagiza (Jamie Ann Burke), a survivor of the Rwandan civil war who lost most of her family during that insane genocide, tells how she managed to outlast the horrors of the struggle in the engaging documentary, “The Power of the Heart,” now available on DVD.

“The Power of the Heart” is a surprising little gem of a movie, one that hasn’t garnered as much notoriety as it deserves. The production’s overall style is reminiscent of the filmmaker’s previous work, stylishly produced and beautifully presented. And, despite a tendency for some of the story sequences to go on a little long, the film makes for worthwhile viewing, particularly for anyone who earnestly wants to learn how to harness the power of this remarkable biological and spiritual tool, one that’s with us at all times and can be put to use in countless miraculous ways.

When all of the foregoing is considered collectively, the heart would appear to be one of our most valuable personal resources, one that we might cherish more than we do if we were to be more aware of everything it can accomplish. Thankfully, that’s where this film comes in, providing us with an inventory of these attributes – and an opportunity to develop a new appreciation for all it does.