‘The Prophet’ muses about the meaning of life

What’s the essence of life? That’s a question mankind has been wrestling with almost from its inception. And, while answers may vary from individual to individual, there’s now a new animated fantasy that attempts to put this inquiry into a larger, thoughtful context, “Kahlil Gibran’s The Prophet.”

“The Prophet,” the latest offering from the director of “The Lion King” (1994), is based on the best-selling book of the same name by Lebanese-born author Kahlil Gibran (1883-1931), first published in 1923. The film tells the story of a spiritually inspired poet and painter named Mustafa (Liam Neeson). For the past seven years, the charismatic foreign-born artist has been under house arrest near the mythical city of Orphalese, a seaport with a Mediterranean ambiance. Its residents, landscape and culture resemble an amalgamation of the peoples, religions and philosophies of the region, with scenic, architectural and artistic elements that look like those found in such locales as Greece, Turkey, Cypress and Lebanon.

Despite Orphalese’s seemingly idyllic character, there’s an undercurrent of tension in the community. The local authoritarian government keeps a tight rein over its residents. It’s also responsible for Mustafa’s house arrest. His ideas, which speak to empowering concepts like freedom and personal liberty, run afoul of those in charge, especially in light of their widespread appeal among the locals. So, to put a lid on such seditious thinking, Mustafa is kept quietly sequestered.

But, even though Mustafa is out of public view, he’s not without people in his life. He’s guarded by an affable though somewhat bumbling sentry named Halim (John Krasinski), who, in turn, is kept in line by a pompous but equally bumbling sergeant (Alfred Molina). Mustafa’s daily needs are attended to by a sweet, conscientious caretaker, Kamila (Salma Hayek-Pinault), a young widow and single mother whose mischievous daughter, Almitra (Quvenzhané Wallis), frequently gets into trouble. The youngster’s actions largely go unexplained, too, because she hasn’t uttered a word (other than occasional grunts and groans) since her father’s untimely death. 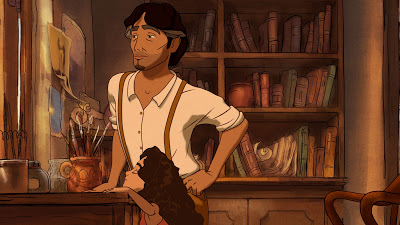 While under house arrest, the poet, painter and prophet Mustafa (voiced by Liam Neeson, background) befriends the mischievous daughter of his caretaker, Almitra (voiced by Quvenzhané Wallis, foreground), in the inspiring animated fantasy, “Kahlil Gibran’s The Prophet.” Photo courtesy of GKIDS.

Mustafa’s routine undergoes an unexpected change, however, when the sergeant informs him that he’s about to be released – provided he leaves Orphalese and agrees never to return. He must also surrender his belongings, including the wealth of new writings and paintings he created while in captivity. So, with a mix of elation and disappointment and only the clothes on his back, Mustafa departs the home that has been his cage for the past seven years, accompanied by Halim and the sergeant, for an appointment with an outbound ship.

While the sergeant wants to dispense with his official escort duties as expeditiously as possible, those hopes are quickly dashed as Mustafa makes his way to the waterfront. His journey allows him to renew contact with hordes of welcoming local residents. They may not have seen him in years, but they clearly remember his words and wisdom and eagerly express their joy at seeing him again.

Much to the sergeant’s consternation, the journey takes much longer than expected. The locals coax Mustafa into making a number of impromptu stops, such as at the wedding reception of a young newlywed couple (Assaf Cohen, Leah Allers) and at a café in the port’s central marketplace. He even has a touching encounter with Almitra. And, during each of these unplanned respites, Mustafa avails himself of the opportunity to freely share his outlooks about life and love and a host of other philosophical topics, imparting the same kinds of “incendiary” insights that got him into trouble with authorities in the first place. In fact, the renewed dissemination of his views upsets the powers that be so much that it’s unclear whether Mustafa will be able to set sail as planned. It seems this unwitting prophet may have quite an eventful encounter awaiting him, one that could lead to despair – or destiny.

Even though Mustafa’s journey provides the means for carrying the film’s story, it’s actually the examination of his philosophical insights that’s what’s most important here. These sequences provide gorgeously animated meditations on his character’s insights. Each is different in terms of appearance and tone, with thoughtful voice-overs and beautiful musical backdrops. They poetically cover a range of life’s big issues, such as freedom, love and death, as well as its myriad everyday applications, including marriage, children, work, and eating and drinking. Each segment makes its points eloquently, both graphically and verbally. 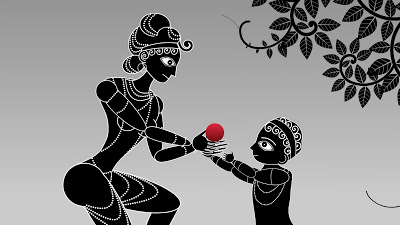 Thoughts on raising children provide the focus for one of the insightful meditative sequences in the beautifully illustrated new animated fantasy, “Kahlil Gibran’s The Prophet.” Photo courtesy of GKIDS.

In exploring these ideas, the meditations all have an underlying theme connecting them – their source of origin. Mustafa’s musings on these subjects clearly state that our personal experiences of these matters all stem from the feelings found in each of our respective hearts. In many ways, this is a poetic way of saying that our individual realities arise from within us, that our outer worlds are physically expressed manifestations of our inner selves. That notion thus parallels the core principle of conscious creation, the philosophy that maintains we create the existence we experience based on our thoughts, beliefs and intents.

The common source of these materializations not only suggests a connectedness linking them to one another, but it also implies an inherent connection binding all of us – and everything in each of our respective realities – to one another. The film thus infers that, despite our seeming personal differences, we are all nevertheless part of a greater collective, and this can be found in both our everyday experiences, as well as our explorations of life’s bigger questions. This is important to bear in mind when we look at what we believe divides us, that we’re ultimately not as different from one another as we might like to think we are. Mustafa’s captors would be especially wise to consider this in their handling of his fate, for, even though his ideas may diverge from theirs, he and they are ultimately all part of a larger human family, one that needs to look more at what we have in common than what separates us. The sooner they (and we) do this, the sooner we all stand a chance of getting along – and working toward the fulfillment of our mutual benefit.

It’s also intriguing how Mustafa’s journey to the docks is, in essence, a metaphor for “finding his way home.” His outward trek mimics his inner, personal passage, taking him down a path designed to lead him back to his true self. It’s a journey we must all take at some point in our lives, preferably with the sort of conscious awareness that he exhibits as he makes his way toward that destination. Approaching our destiny – and the true nature of our individual and collective selves – is always easiest (and most fulfilling) when we do so with our eyes, hearts and minds wide open, just as the protagonist does here. In the end, the outcome from doing so may prove to be far more rewarding than any of us could possibly imagine. 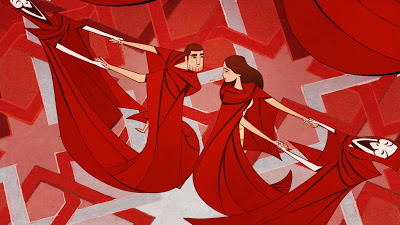 Thoughts on love provide the focus for one of the insightful meditative sequences in the beautifully illustrated new animated fantasy, “Kahlil Gibran’s The Prophet.” Photo courtesy of GKIDS.

“The Prophet” presents an intriguing, inspiring mix of thoughts and ideas in a beautifully animated cinematic package. The meditative sequences are particularly impressive with their stunning imagery and profound thoughts. Viewers young and old are sure to glean valuable insights from these segments. It’s truly refreshing to see a picture that attempts to offer something meaningful to more youthful audiences without being condescending or silly.

With that said, however, the film also has one major flaw – an overlong (and surprisingly somewhat juvenile) opening sequence. While this segment is necessary to introduce the characters and the narrative that carries the story, its execution leaves much to be desired (and could easily turn off viewers whose patience is easily tested). So, in light of this, I heartily suggest that audience members do what they can to grit their teeth and hang on through this portion of the picture. They will indeed be richly rewarded for their persistence if they can successfully make it past a lead-in seriously in need of significant reworking.

The film is currently playing in limited release, primarily at theaters specializing in independent cinema. Visit the picture’s web site for locations where it’s being screened.

Those seeking the truth about the nature of existence have often come to the conclusion that “life is its own answer.” For some, that supposition may seem overly glib or simplistic. However, the more we look at it, the more likely we’ll come to agree with that idea, especially when we sincerely assess the source of our life’s origin. “The Prophet” helps show us the way in that regard, revealing just how beautiful, meaningful and rewarding it – and we – can be.