Skip to content
Home/Archives/Wrapping Up the Chicago Film Festival

Wrapping Up the Chicago Film Festival

Once again this year, I had the pleasure of attending the Chicago International Film Festival, which has come a long way in its 51 years. With its more than 125 film offerings, the two-week event has become a premier cinematic celebration for movie lovers in the Windy City and around the world.

Given the Festival’s extensive schedule, it’s truly difficult to decide what to see. Some of its features will go on to general release (such as Todd Haynes’s “Carol” and Michael Moore’s “Where To Invade Next”), so those pictures can always be seen later. But many other films don’t get picked up by distributors and only screen at festivals like this (which means see it here or not at all). This, combined with the fact that there are only so many hours in a day, means that selecting a Festival watch list usually calls for making some rather hard decisions.

For this year’s Festival, I screened 13 titles, many of which were quite good and well worth seeing. What follows is a summary of the pictures I saw, along with my scores using the Festival’s 1-5 audience rating scale: 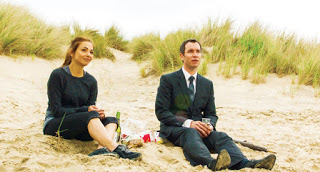 “The Surprise” (Netherlands). This hilarious dark romantic comedy successfully fuses several seemingly unrelated genres into a unique movie-going experience. When a wealthy aristocrat (Jeroen van Koningsbrugge) disappointed with life stumbles upon a company that will do him in for a fee, he jumps at the chance. He even gets to select the method of his demise, for which he chooses the “surprise” option – one in which he won’t know beforehand how or when it’s going to happen. There’s just one catch: Once he signs a contract, there’s no going back, a condition that becomes complicated when he unexpectedly meets a new romantic interest (Georgina Verbaan), who, ironically enough, has chosen the surprise option for herself. What to do? Their story thus plays out with a series of hilarious, unanticipated developments, twists and turns that keep viewers guessing right up until the end.

Director Mike Van Diem’s highly original, well-written offering takes viewers on a whirlwind journey that, as the title suggests, continually surprises. With its polished production values, a terrific cast, and an overall style resembling the movies of directors like Hal Ashby and Peter Weir, the film thoroughly satisfies from start to finish. Unfortunately, even though this production has garnered wide overseas support and earned rounds of applause from Festival audiences, the picture has yet to find a US distributor; I hope it succeeds at that, as this is a fine, funny picture that discriminating American audiences are sure to enjoy. (In English and Dutch with subtitles) Rating: 5/5. 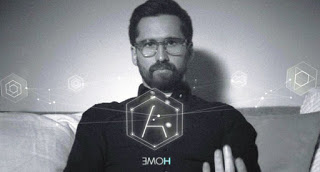 “Creative Control” (US). This smartly written, beautifully filmed, superbly acted independent comedy-drama about modern technology, what we’re doing with it and what it’s doing to us presents a scathing indictment of modern culture and its questionable effects. When an ad agency is hired to come up with a campaign for computer eyewear with interactive capabilities, the organization puts its best man, David (Benjamin Dickinson), on the account. To learn about the product, David tries it out, but the technology’s capabilities are so compelling that he quickly loses his capacity for distinguishing what’s “real” and what he’s created using the product. This creates big issues in his relationships with his girlfriend (Nora Zehetner) and a co-worker (Alexia Rasmussen) with whom he’s become obsessed.

The film’s wry but relevant metaphysical underpinnings give us pause to think about what we’re creating and what we’re becoming as a result of it. Actor/writer/director Benjamin Dickinson, a bona fide rising star, offers up an insightful picture whose thoughtful messages are delivered with incisive humor in a gorgeous, ironic package that definitely deserves wide exposure. (In English) Rating: 5/5. 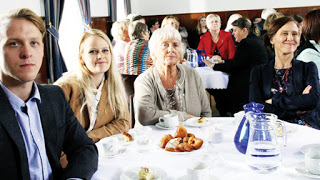 “The Homecoming” (Iceland). This charming, crowd-pleasing comedy-drama entertains with wit, understatement and raucous surprise from start to finish. When an author of self-help books (Hilmir Jensson) becomes bored with writing the same trite titles over and over again and a marriage to a wife he barely knows (Harpa Arnardóttir), he desperately looks for a way to reinvent himself. He gets that opportunity when his son (Hilmir Jensson) comes home with his new fiancée (Þórunn Arna Kristjánsdóttir), a development that shakes up everything about his life – and in more ways than he bargains for.

Director Björn Hlynur Haraldsson’s feature film debut knocks it out of the park through its ironic humor, heartfelt emotion and stellar writing. The superb ensemble cast delivers at every turn, with the performers getting ample mileage out of gestures as modest as simple facial expressions. This film made its US premiere at the Festival, and it truly deserves a US distributor (I sincerely hope it gets one). (In Icelandic with subtitles) Rating: 5/5. 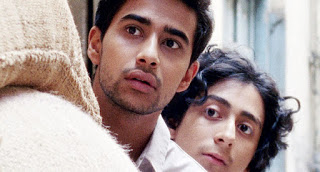 “Umrika” (India). This touching, funny, slice-of-life feature follows the lives of two brothers (Suraj Sharma, Prateik Babbar) from a small, rural Indian village who are obsessed with making something of themselves in “Umrika” (America). But getting there may not be as easy as they think, especially when clues emerge suggesting that everything is not what it seems. The quest for the truth thus sets one brother and his best friend (Tony Revolori) on a journey full of twists, turns and surprises.

Director Prashant Nair’s cross-cultural comedy-drama presents an intriguing look at two worlds, offering viewers insights into them without spoon-feeding the material to audiences. A thoroughly enjoyable, heartwarming offering well worth seeing. (In Hindi with subtitles) Rating: 4/5. 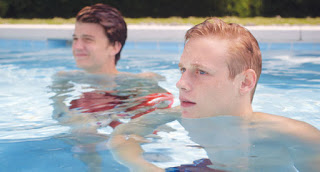 “Henry Gamble’s Birthday Party” (US). Seventeen-year-old Henry Gamble (Cole Doman) is celebrating his birthday with a pool party for friends and family. But the festivities feature more than just cake and presents; the celebration also nudges a number of secrets out into the open, such as Henry’s growing awareness of the need to acknowledge himself as gay, a rather daunting challenge in a household headed by a dad (Pat Healy) who just happens to be an evangelical preacher.

Director Stephen Cone’s insightful coming of age comedy-drama entertains with subtle wit, a degree of suspense and fine performances by an excellent ensemble cast. Despite a slight tendency toward monodimensional character development, the film follows through on its objective nicely. A well-received, award-winning offering at this year’s Festival. (In English) Rating: 4/5. 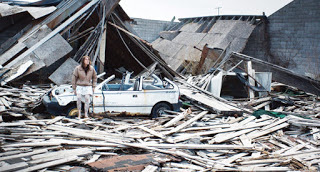 “Embers” (US). This haunting meditation on memory and the different ways we relate to it follows the experiences of a group of characters afflicted with amnesia in a post-apocalyptic world. In doing so, the film offers a variety of views on this subject in a diverse array of settings and locales. Director Claire Carré’s debut feature makes use of incisive writing and editing, coupled with a number of fine minimalist performances, excellent cinematography and a captivating score. A great choice for thoughtful viewing. (In English) Rating: 4/5. 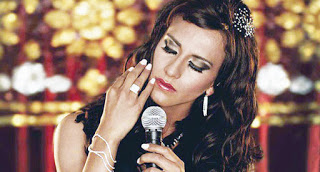 “Carmin Tropical (Mexico). When Mabel, a Mexican muxe cabaret singer (José Pecina), learns of the murder of one of her longtime friends, she returns to the small resort town where she grew up to investigate. While there, Mabel engages in a profound examination of her own life and considers her options for the future, some of which surprise her – and the audience.

Director Rigoberto Pérezcano’s unconventional murder mystery effectively captures a variety of moods from that of an atmospheric noir-esque tale to a kitschy gay comedy to an offbeat, unlikely romance, all rolled into one. Despite a slight tendency to drag (no pun intended) in the last half hour, this multifaceted movie is like curling up with a good book, one that features one of the most effective closing sequences I’ve ever seen in a film. A delightful, emotive surprise. (In Spanish with subtitles) Rating: 3/5. 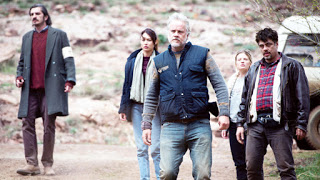 “A Perfect Day” (Spain). Director Fernando León de Aranoa’s latest offering presents an uneven but mildly comic look at the seat-of-the-pants misadventures of a group of ragtag aid workers (led by Tim Robbins and Benicio Del Toro) serving in the waning days of the Balkans conflict of the 1990s. The story is somewhat episodic, with some sequences that pop, some that try too hard and others that crawl at a snail’s pace.

The film, reminiscent of “M.A.S.H.” but with an Eastern European accent, gets better as it goes along, making up for a somewhat slow-paced and often-forced opening 40 minutes. The chemistry of the ensemble cast and the solid performances of the leads do a lot to help shore up the material, which could have used some judicious pruning and snappier dialogue. Overall, not bad, but, if you have better viewing options, take those instead. (In English, Serbian and Spanish with subtitles) Rating: 3/5. 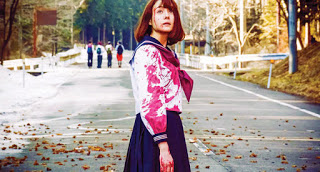 This quirky tale takes viewers on quite a rollercoaster ride, with ample exaggerated laughs along the way. Pacing and editing issues, unfortunately, cause the picture to drag somewhat between action sequences, but, when the film works, it’s utterly hilarious (though definitely not for the squeamish). (In Japanese with subtitles) Rating: 3/5. 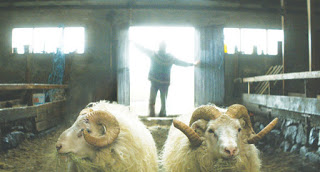 “Rams” (Iceland). Two sheep herding brothers (Sigurður Sigurjónsson, Theodór Júlíusson) live next to each other on neighboring farms but, because of a long-standing feud, haven’t spoken in years. That animosity grows even worse when accusations arise that one brother’s flock may be harboring an incurable disease that threatens their livelihoods and those of their neighbors throughout the surrounding valley. Tensions mount as the brothers wrestle with the authorities – and each other.

Regrettably, director Grímur Hákonarson’s latest offering can never quite make up its mind what it wants to be. What had the makings of being a hilarious absurdist comedy never quite lives up to its potential, with its comic turns spaced too far apart (and generally coming off as a little too incongruently dark when they do so). In turn, its dramatic elements aren’t especially compelling enough to keep viewers riveted at their unfolding. Despite some gorgeous cinematography and an engaging soundtrack, the picture largely misfires in all the areas where it really counts. (In Icelandic with subtitles) Rating: 2/5. 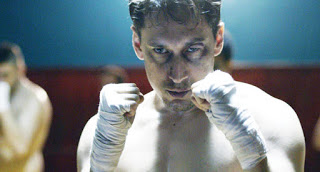 “Full Contact” (Netherlands). What starts as a promising, thought-provoking drama about the moral conflicts of a military drone operator (Grégoire Colin) unfortunately goes off the rails about 30 minutes into the film, never quite recovering. Regrettably, a picture that could have addressed some significant moral, social and personal issues degenerates into a somewhat-overlong exercise in excess and self-indulgence. Director David Verbeek’s effort represents a real missed opportunity, despite the picture’s receipt of the Festival’s Silver Hugo Award for best actress Lizzie Brochere. (In English and French with subtitles) Rating: 2/5. 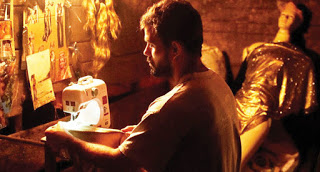 “Neon Bull” (Brazil/Uruguay). Ironically, director Gabriel Mascaro’s would-be character study fails miserably mainly because of a lack of effective character development. The film’s episodic story line follows the unusual life of Iremar (Juliano Cazarré), a rodeo hand who longs to be a fashion designer. Unfortunately, the picture never gets inside the protagonist’s head and spends considerable time irrelevantly focusing on the lives of others.

The inclusion of gratuitous, irrelevant and unnecessary imagery (especially of a graphic sexual nature) and bizarre, surrealistic cinematography intrude on what appears to be the intended narrative, quickly eroding whatever interest one might have in the film. Save your time and money on this epic failure. (In Portuguese with subtitles) Rating: 1/5. 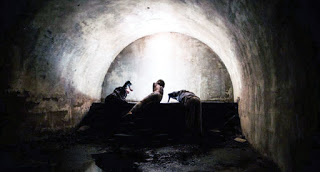 “The Abandoned” (US). A dull, obvious horror film with virtually nothing scary about it. Despite some beautiful location shots and a decent original score, this weak offering follows the classic formula of characters making unbelievably bad decisions and winds up with an allegedly startlingly twist, all of which is handled badly and easy to predict long before events unfold. And, if all that weren’t bad enough, it’s topped off with laughable acting and lame inside jokes. Skip this one for sure. (In English) Rating: 1/5.