Skip to content
Home/Archives/‘Freeheld’ explores the power of change

‘Freeheld’ explores the power of change

When an obvious injustice become apparent, there’s a natural tendency to right such a wrong. But who will step up and take on the challenge? Sometimes the champion of the cause will be readily recognized. In other cases, however, the leader of the revolt may be the unlikeliest of candidates. In the end, it will all depend on the strength of the beliefs behind the force for change, a principle explored in the emotional new biopic, “Freeheld.”

In 2005, decorated New Jersey police detective Lt. Laurel Hester (Julianne Moore) was living the good life. Her career was going well, she had just moved into a beautiful new home and she was enjoying her relationship with the love of her life, Stacie (Ellen Page), with whom she had formally established a domestic partnership under the state’s recently enacted law governing such arrangements. There were some trade-offs, such as Laurel’s belief in the need to keep her lifestyle secret for career advancement purposes, but, on balance, everything seemed to be going well. That all changed one day, though, when a nagging pain thought to be a pulled muscle turned out to be something far more serious – Stage IV lung cancer. 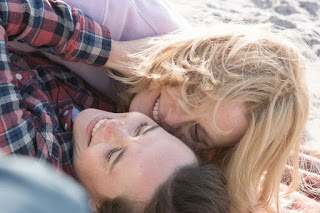 Despite her hopes for the best, Laurel knew her prognosis was not good. Given that, she began making preparations for the worst. Laurel’s biggest concern was providing for Stacie, who was many years her junior and lacked her earning power. She decided to take the bold step of coming out publicly and asking that her pension benefits be assigned to her partner upon her death, a provision allowed under the domestic partnership act. As an Ocean County municipal employee, she petitioned the local governing body – the board of freeholders – requesting the assignment, an appeal that was promptly rejected.

In rendering their decision, the freeholders noted that they were under no obligation to grant such a request to a same-sex couple, even though a comparable transfer involving a married couple would sail through automatically. The freeholders argued that the county could not afford such an assignment. They further justified their position by citing a provision in the domestic partnership law that maintained county governments were not obligated to grant such requests (even though they were given the option to do so if they so chose). From the freeholders’ standpoint, the matter was considered closed. But that was not the end of it.

Laurel and Stacie decided to appeal the decision. And, when word of the request’s rejection began to spread, the couple amassed legions of support. First in line was Laurel’s work partner, Detective Dane Wells (Michael Shannon), who actively sought to secure the backing of fellow officers. Then Laurel and Stacie received a huge boost from gay rights activist Steven Goldstein (Steve Carell), a flamboyant but effective advocate who publicized the case extensively, generating widespread public attention. Hordes of community and out-of-town supporters soon descended upon the Ocean County municipal building to get Laurel’s rejection overturned, with throngs of local, regional and national media in tow to cover the growing controversy. 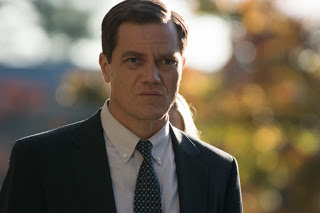 Dane Wells (Michael Shannon), a hard-nosed police detective, reveals a strong, compassionate side in coming to the aid of his dying partner in director Peter Sollett’s “Freeheld.” Photo by Phil Caruso, courtesy of Summit Entertainment.

With the heat sufficiently turned up on the freeholders, the unanimous consensus that the lawmakers prided themselves on in rendering all of their voting decisions began to erode from within. Freeholder Bryan Kelder (Josh Charles) saw the inherent injustice in the board’s ruling and threatened to break ranks with his colleagues (Tom McGowan, Dennis Boutsikaris, Kevin O’Rourke, William Sadler). Afraid for their jobs, the majority members engaged in ample arm-twisting, punctuated by time-worn religious arguments, to try and sway their colleague, who, in turn, made his case by pointing to the board’s plummeting public approval ratings.

The die, it seems, was cast. In virtually no time, Laurel’s appeal was brought up for a new vote. The board’s decision would set a precedent and prove to have sweeping implications that extended far beyond Ocean County, New Jersey, a fitting legacy for a reluctant hero, one whose courage extended far beyond the limits of her badge.

Stepping to the fore to lead a cause – no matter how noble – requires a great deal of courage for just about anyone, even the most ardent of advocates. But, when circumstances call for a reluctant hero to herald the charge, it often takes a lot for a hesitant champion to work up the nerve and assume the responsibility. Such was the case for Laurel. But, then, given the personal stakes involved, she was the only one who could make the case, at least at the beginning. However, in mustering up the necessary bravery, she forged ahead to get her voice heard, a move that would aid not only Laurel and Stacie, but also a silent constituency of others similarly situated, beneficiaries whose needs would have gone unmet were it not for Laurel’s tremendous fortitude.

The ability to face one’s fears and live heroically in this way is a crucial element of the conscious creation process, the means by which we manifest our reality through our thoughts, beliefs and intents. Such behavior is often essential to seeing certain dreams realized, especially those that challenge convention and push the limits of possibility. This is one of conscious creation’s guiding principles, one that helps make it possible for us to experience our inherent nature, one characterized by our continuing evolution, our constant state of becoming.

Of course, Laurel wasn’t the only one who took the risk. Her work partner, Dane, faced much scrutiny from his peers, many of whom were initially unable or unwilling to see the validity of their colleague’s claim, simply because she was not married in the traditional sense. Dane argued that he could marry Laurel immediately and that there would be absolutely no issue about the disposition of her pension benefits upon her death, so why should the situation be any different simply because she was partnered to someone of the same gender? He also pointed out how difficult it was for a same-sex couple to legally establish a domestic partnership as Laurel and Stacie did (a process at the time far more complicated than that required for a man and a woman to get married). So, if two people of like gender were willing to go to all that trouble, he contended, that must say something about the strength of their relationship and their level of commitment to one another, proof that the parties to such arrangements were just as deserving of the same benefits automatically accorded their heterosexual counterparts. Dane’s arguments ultimately proved quite convincing, so much so that most of his colleagues broke through their once-prejudicial limitations, expanding their beliefs about what was innately just and fair. 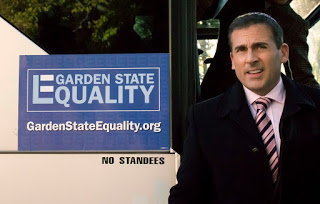 Once word of Laurel’s plight became known, support rushed in from many quarters, thanks in large part to Goldstein’s unbridled enthusiasm. The diverse coalition of backers he helped forge labored tirelessly to bring about reform. They unquestioningly placed faith in their beliefs, and the power of the collective worked wonders in bringing about this mass-created result. Even in a community as conservative as Ocean County, change proved possible when fueled by the power imbued in joint efforts.

Given her background, at one time, Laurel probably never would have thought that she would become a poster child for one of the key battles in the gay rights movement. Yet, as events played out, circumstances materialized that enabled her to live out her unlikely destiny, to practice what conscious creators refer to as their value fulfillment. Laurel was not coerced into making this choice, but, given her belief in such qualities as integrity and fairness, there was no way she could back down from the fight in good conscience. It’s a good thing that she didn’t, either, for her victory led to an amendment in the provisions of New Jersey’s domestic partnership law. That amendment, in turn, led to the passage of the state’s same-sex marriage law, which, in turn, helped bolster the argument that led to the landmark Supreme Court ruling allowing same-sex marriage across the US. Not bad for a reluctant hero who just wanted to see things made right. 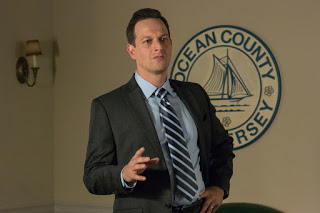 “Freeheld” is a somewhat formulaic, occasionally preachy but nevertheless heart-tugging story about righting an inherent wrong, with fine acting across the board. It capably chronicles an event that helped bring about a sea change in American society and does so with powerful emotion, especially in the film’s second half. The picture is admittedly a bit unevenly paced at the outset, but, as the story settles down and becomes more focused, its true power comes shining through. For those who care about witnessing justice and fairness triumph, this is a must-see.

The hero’s journey is said to be a lonely one, but that need not be the case, especially once the hero stakes a claim to his or her cause and rallies the support of followers willing to back the undertaking, no matter how arduous or insurmountable the task may seem. As “Freeheld” reveals, the power of change is virtually impossible to restrain once the core issue is made clear for all to see. With all of the obfuscation removed and the truth made plainly apparent, justice has an open road available to it, clearing the way for genuine righteousness to become rooted where it had previously been lacking. 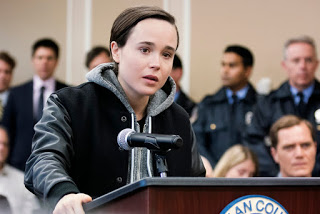 Faced with the impending death of her partner, Stacie Andree (Ellen Page) makes an impassioned plea before county lawmakers for fulfillment of a request made by her dying spouse in the emotional new release, “Freeheld.” Photo by Phil Caruso, courtesy of Summit Entertainment.